After of conversation with the others, Quildrum will g[ to the smithy and knock out any dents in his shield and help the smithy til its time to go to the island.

If it works for you, let’s go with the idea that I have the spell as learned but still need to cast it. I was hoping Mehrfin would be able to place this on some weapon for Quildrum since he’s been such a dedicated friend. Thanks.]

[Hey Quil, instead of chillin you could go ahead and get a head start on that Yag for us… thanks.]

Hykon sets about performing the cleansing ritual that will set Mehrfin free of his curse.

[Hy dunce, not by myself I won’t… u can go n do it with your iron fists]

[@Nivek Yeah, once you’ve successfully made a HARD INT check to make/modify a spell, any future casting of that spell variant will be like any other normal spell.

But as you’re a Mage, not a Priest, the new spell needs to be put into an object (which you can do for free) as part of your inventory]

[@GaryD20 which reminds me, as a Priest, if you fail a WIS spell casting the spell will go awry- but you don’t need to store spells in objects like a mage does. I’m saying it to you as a reminder to myself! Lol!]

Okay my CHA roll was a 15+2
Muel relates what he saw at the orc encampment, including supplies and troop estimates, and then he goes on a tangent about what he would have done to the Cyclopstodon (to much groaning) that finally ends with him pantomiming Hykon’s Atomic Palm and the escape with Morvi.

[My thoughts exactly @Smittumi. Below is my “Frost Infuser” whetstone for adding cold damage to bladed weapons.] 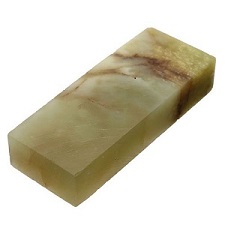 [After figuring out the methodology, Mehrfin picked up the sharpening tool from the local armory store and worked on getting that infused later in the evening, or while we are on the road, etc. Thanks.]

Hykon and Mehrfin emerge from the temple, and step out into the evening air. Both look tired but have a look of triumph about them. The priest’s ritual worked.

Mehrfin then checks his new spell infused whetstone. It gleams with magical energy.

The Dwarves and Humans of the Lighthouse give their sincere gratitude to Muel for his advice, and his uncle hugs him warmly. “Be safe out there, boy. And if you can’t be safe, be brave and remember the names of your fathers.”

The next morning all the heroes trek down to the fishing village and ask around for someone to take them to the island, which sits on the horizon line like an unspoken curse.

Of course, no-one will take them, and on top of everything else there are rumours from scrubs that the snow orcs are starting their final preparations andwill soon break camp. [Greystone Timer at 3].

Eventually the heroes reach an agreement to borrow a rowboat from an ancient toothless sailor who goes by Tobius. Then they watch the waves and wait for the right tide. This takes up most of the day.

At last, after a few hours the tide begins to turn and they push the boat into the sea and hop aboard. Then they begin the long slog towards the island, rowing on and on towards their fate.

Watching the sea as they row they can make out dim, dull shapes deep below the dark waves. Still the creaking rowboat presses on. And as the evening draws on, over the water they can hear the sound of drums.

As they close in on the Island they can see it more clearly now. Its grown since last they looked at it. Its huge now, almost the size of a town!

Black, jagged rocks sprout out of the ocean, about fifteen feet above the water. They form a kind of natural wall around the island, preventing the adventurers seeing across it.

They do however see a gap in this wall leading inside. Then, down to the last mile they see another boat, closer to the island than they are, heading towards it. It appears to slink into the island from the north and disappear, suggesting another entrance there.

[To be clear its evening, you’re all in a rowboat, this island is protected by jagged rocks but there is an entrance if you want to row inside, possibly a second entrance to the north, and you have not rowed around to the south.

The Timer is at 4

The Target is 15 (partly because of the dark)

Muel rolls an 11+0 INT check to strain his eyes and ears through the night for a clue from the receding boat.
“If they aren’t rowing anyone out to this Island then where did this boat even come from? Did they see us?”
[I think we should take the obvious entrance, second choice is paddle south and explore further, third choice is follow the boat]

Quildrum says I believe that we should paddle to a safer way to get to the island Muel. I’m not tryin to die out here in the water"

Mehrfin: “We could try South. The other boat is likely expected and headed to a main entrance, which is just as likely guarded. If we do go that way, we’ll have to be prepared to deceive our way through, or start killing all the guards. If we could find a way to sneak in that would be better. That’s my opinion at least.”

Well anyone else has any thoughts of this way or south. Muel could possibly try n see if there is a way to sneak us in.

[Let’s see what light Hykon can shed on the matter. It seems like exploring further south is the way we’re leaning, North seems to be a can of worms (in our estimation so far) the obvious entrance could be a trap, and my INT check probably didn’t glean any new info.]

Hykon watches the other boat approach the island and shakes his head. “I’m with Mehrfin, about that boat. It’s more than likely expected. We would possibly raise alarm trying to go that way.”

Hykon switches his gaze back and forth between the southern direction and the gap in the rocks. “Can’t really say which of those two ways appeals to me most. My thoughts are that the southern way would be the most logical if we wanted to avoid being detected, but it means being on the water longer, with what ever those things are,” he says pointing to the black shapes under the surface of the sea."

“And, I’m not to fond of taking the gap, especially since we can’t see what is on the other side of that rock wall.” He shakes his head again and sighs. “But that wall might give us cover. I don’t know. My gut says south…”

Hykon bows his head and says a prayer to his deity to see if he can get some incite into the direction to take. [If that’s something he can do??] WIS 8+2=10

[I realise I should have given you more info so you could make an informed decision. So let me take over your actions for a sec.]

The western entrance the heroes face has just one visible light, a lonely flicking torch, and the sound of drumming is very faint.

It looked to Muel as though the earlier boat came from one of the fishing villages further up the coast. But that’s as much as he can tell.

After some discussion the heroes row the boat to the southern part of the island and discover another entrance between the jagged rocks. This one is deathly quiet and there are no lights at all.

Rowing the boat to the north the heroes see the gap where the previous boat must have entered the island interior. Here there are numerous torch lights and the sound of drumming is much clearer.

The heroes have no torch (unless one of you has it in your gear?). Iron Heart is almost completely obscured by cloud making it very dark, and it begins to rain heavily.

[@GaryD20 - I love the prayer idea. Although you missed the roll in going to create a mechanic for it. Just don’t know what yet.]

Target 15 (due to the oppressive dark and bad weather)

I suggest we go through the original entrance we came to … some light while at the same time less likely to be discovered.

I have a torch in my adventurers pack. I use that to try and guide us in among the jagged rocks. (Wis 20+1=21)

I also store 4 additional points in my memory ring, bringing the total to 5.

Also, Quil dropped and broke his phone, which is how he plays on here, so until he gets it replaced I’ll be relaying what’s going on here to him and then reply for him after he tells me what his action is. So…

Quil also concurs with the plan.