Hykon smashes down on the ground and, after a single second of silence, a massive seismic wave blasts across the area.

The scrub orcs, and the snow orc patrol are torn in half. Annihilated! And their body parts fly through the air.

The noise travels down the hill and reaches the camp. There is a flurry of activity. But for a moment at least there are no enemies nearby.

When Hykon withdraws his hand from the crater he formed his tornton hands are imbued with iron [ME p43 Iron Fist].

[Morvi rolls a 2 on her timer]

[@Smittumi, is the curse still on Mehrfin “Whenever in moonlight. First Wis test is Hard”? If so, I’d like to get that taken care of if there is a priest in town that can help with that. Thank you for the hero coin.]

Mehrfin takes the time to save (1 point of) energy into his memory ring.

He then asks Quildrum if he thinks they should gather some volunteers (if possible) to go back to the tower to seek any other artifacts, or if they should go after their friends to see if they need any assistance. He is also open to other options.

Quildrum says" I think we should go n check on ours friends, they could possibly help with the tower n maybe gather some volunteers also to help… the more the merrier"" plus it’s been several days since we all have divided up."

Mehrfin seeks to gather volunteers from Durhadda and any surrounding areas before commencing on their trek. [Cha 16].

Muel isn’t able to pick up Morvi, so he puts his hand behind her neck to ease her breathing and to try and stabilize her:
“Just hang on girl! Hang on!”
INT check of Nat (effing) 1 again…
[My dice are trying to kill me and everyone around me…]

[Aaahhh, we miss you guys to!]

Hykon turns and kneels down beside Morvi. He lays a hand on her and softly recites a prayer, casting HEALING TOUCH.

Hykon looks at Muel and says, “We better get out of here fast, before the whole camp descends on us.”

He helps Morvi to her feet. If she is unable to walk just yet, Hykon will carry her piggy back style. Other than that, time to beat feet.

Muel is in complete agreement. He does his best to cover their rear as they make good their escape back out of the encampment.

[@AbbenWisson and @GaryD20, after fleeing what is the objective? Where next?

Muel wants to head back to Duradin and regroup with Quil and Merf. He feels like they can’t do this alone, but he’s still in awe of Hykon and he tells Morvi what thinks he saw in a hushed tone.
“… and then his hand turned to IRON, Morvi! Who is this guy? We’re lucky he’s on our side!”
“Hey Hykon, should we head back to town to tell what we saw here? Also, thank you for saving my friend…” (his voice cracks a bit)
Morvi smiles gratefully and seems to see the Torton in a new way.
[What does Hykon look like, BTW? I’m trying to picture what he’s wearing/equipped with]

“Yes,” Hykon says, agreeing with Muel. “We should get back to Duradin and tell of what we’ve seen here.”

As far as appearance goes, Hykon is rather plain and nondescript. He wears common travelers garb underneath the cloak of Green Bark he’s recently aquired. He carries a sword and shield and a crossbow. The one accoutrement to his physical appearance, and from which he gets his surname of Hykon the Red, are the red highlights that run throughout his shell.

“What are you two going on about?” Hykon asks, obviously uncomfortable with their sudden interest in him. “Come, make haste, Duradin awaits!”

The heroes reunite on the road between Kiln and Durhadda, and pass through one of Mehrfin’s doorways back to the safety of the keep.

Finding one another while evading snow orc patrols took [d4] four days but eventually they did.

[I’ve made appropriate Front rolls to see which fronts advance.]

Once home they learn that Lighthouse patrols have seen scrub orc bands skulking away from Kiln, suggesting at least some delay in Duke Greystone’s plans. [Timer at 4]

However, two more mages have shown up dead, drained of life and magical energy by Yag [Timer 2], and the lens has shown further signs of cracking, though only slight [Timer 3].

Perhaps most pressing though is the gathering stormclouds rolling in from the sea [Timer 1]. The island activity has continued, the sun is barely able to break through the thick grey and the winds and rain are now terrible. Everyone knows orcs, regardless of type, prefer to fight out of the sunlight. Fishing boats no longer go out, and people have begun to go missing, dragged off some say, by dark wet figures that come at night. And everyone in the Keep suffers from a restless sleep, haunted by horrible dreams of drowning.

Mehrfin if you want your Sprite curse lifted that’s something Hykon will be able to do, it’ll take a day to perform the ritual.

All take a milestone reward (from class or path) for surviving splitting the party.

Turns are one day long, so pick a day long activity.

Target is at 10 (due to the oppressive weather)

What do you all do?

“Hykon … buddy ol’ pal! I heard you got all iron fisted. That’s pretty awesome! Hey … not to be a nag, but the other week I got cursed. I’ve stayed out of the moonlight and all that, but was really hoping you’d be able to hook me up there. None of my studies in the library so far have helped out much with my little Sprite problem.” 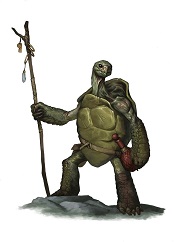 This is kind of how I visualized him. More nerdy though, and laden with a couple backpacks and not yet possessed of the walking stick.]

“Of course,” Hykon says to Mehrfin. “I’ll do what I can for you. Might I suggest we handle this at the Temple. I’ll arrange the accommodations.”

Hykon also suggests to the party that our next move should be in handling the situation at the Island. Once Mehfrin, and I, are finished with his cleansing ritual.

Muel Duran is looking slightly worse for wear after being winged by a javelin (he actually was trying to get it to bleed a little more on the walk back, nothing is more impressive than a blood soaked bandage, he thinks). His Battle Tabard has some cool looking cuts in it, though, so that’s something…
Other than that he looks like he could use a haircut, (when his hair grows you can tell it’s already starting to thin a bit in the front.)
He’s going to head to the Lighthouse and check to make sure he re-hid the passage in the Library well enough, and then hit up his cousins to see if one will shave his head and maybe see about repairing or replacing the armor he lost. [Smittumi willing, I’m fine either way❤️]
While he’s there he wants to see about raising some standing defenses against the gathering orcs by relaying what the party had witnessed in Kiln.
Then he goes and sees an armorer in downtown Duradin and has his (common+2DEF) shield enameled with a VERY garish yellow lighthouse on a bright green field with royal blue background. [I’m taking the Warrior Milestone Intervention: intercept an attack against one CLOSE ally, once per round] (He’s overcompensating a bit, lol.)
He holds it out and looks at it, unsure already.
“Hells yeah, that’s sick! I can’t wait to use this!”
then he kinda throws his cloak over it and runs off to find the others.