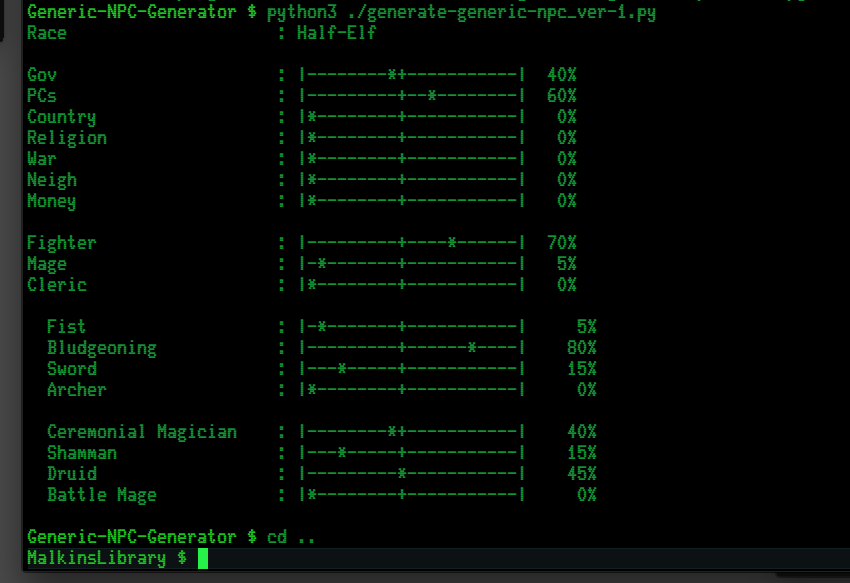 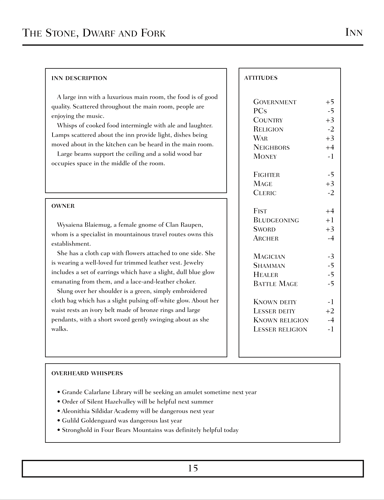 I had come up with an attitude chart for NPCs a while back. The problem was creating a unique character in short order. The solution was to create a randomly generated chart that covered large areas of decision making. The idea being that any questions for the NPC would have some kind of foundation and consistency.

I put together a simple Python script adding a few ideas, then further expanded that. The second image is from my upcoming book.

I wanted to share in case someone else had a similar problem.
All the best!

I’m sorry, I don’t quite understand how it works and how to generate it? :3

Values that I was using are: -5 / +5 with zero not being available.

Each of these is a category. Using the inn as an example (either the inn keeper or the general opinion of the patrons): the government is liked (+5), the PCs aren’t liked at all (-5 OUCH!), likes their country and government, doesn’t like religion so much, likes war (or generally hostile towards something/someone or will support it under certain circumstances), loves their neighbors, money is not a deciding factor.

The purpose is to allow the storyteller to get a general feel for the motives of an individual. This person would be motivated by their neighbors, government and country.

For example, if their neighbors (a different city for example) was being attacked by monsters, they would support the idea of going after those monsters or invaders (likes war, likes other city).

The other categories will give the storyteller additional information. Following the ‘Stone, Dwarf and Fork’, the individual is not much of a fighter, a bit on the magic side and not much of a cleric. They are good with their fists and sword, can klunk things over the head with something heavy. Archer, not so much.

The next set of categories is more vague. Is it actual skill or like/dislike? The storyteller would need to interpret this. It seems that this lady isn’t much into the whole magic-cleric thing, but likes to punch something in the nose. (Or kneecaps given that it’s a gnome.)

The last category is whom or what the individual (or group) generally likes.

Let me know if this helps or if you would like more info. You can treat this as some kind of oracle, it’s an interpretation thing versus a finite number.

It is quite helpful! I would love access to your generator for sure!

But also, you could perhaps have racial and class modifiers perhaps? Like Dwarves tend to maybe like their government more?

could perhaps have racial and class modifiers perhaps? Like Dwarves tend to maybe like their government more?

I am working on a re-write now and I can make it available. The white paper is from a book that I am about to publish on DriveThru which has five inns (one of which is above).

I like the idea of racial modifications for the attitude chart!

I have the inn name, forest name and male elf names working. Presently working on better ways to interact with the data files. I can let you know when alpha is available.

Awesome, thank you! Keep us updated, can’t wait to buy it!

I just uploaded a free sample of the book to my website Bamboo Hare.com. It’s a free download with no sign-ups required in PDF format.

I took several pages from every section, including a complete Table of Contents. This should give the reader a good overview of the writing style and art style. If you would like to download a copy for yourself, you are more than welcome to do so. If you notice any errors or additions that you would like to see, please reach out to me. This is pre-release. Presently I am missing cover art.

All the best,
Josh