A Discord conversation today got me thinking about Visual Representation of Games. One of my go-to theories is that players need to know where the walls are, not just the physical walls, but the intangible walls of genre and tone and capabilities. We all need to be on a similar wavelength at the table when it comes to where the lines are. Not just to prevent dissatisfaction and table problems, but to make the rest of the game more fun and exciting. Constraints cradle creativity.

Talking about walls and how I sometimes prefer very low walls with 2.5D perspective, I figured out that this need for shared solidity of walls and “relative space” is exactly why, much as I like the respect Professor Dungeon Master’s work and the general idea of Universal Dungeon Terrain, I get hung up on relative distances. The Outer Ring of all things FAR messes with my head a little. (How FAR are the FAR things from each other? etc.)

The other thing I love about UDT is the need for less stuff at a table. Economy and essentialism of resources, yada yada. But what parts of your table are most detailed and colorful in a gaming space are a nonverbal indication of what’s most important, plot relevant, worthy of attention, whatever. The bulk of the table clutter is there to help everyone share the focus and boundaries of what’s going on. This is also why Sharpie Style bare bones backgrounds work great for me much of the time, but setpieces, boss monsters, and a really key NPC will maybe get a tad more love.

All of which is why UDT for me is an especially hard concept, and even moreso on VTT, where the Visualization of the setting has to do such a bigger share of the work to foster player engagement than I’m used to the background art really doing at the table.

Don’t misunderstand me. I’m not taking this to extremes or going all “This is the One Way it must be or you are wrong” about it. It’s a fine balance when determining how cool to make your room or your monster, relative to how cool the mini or token is for the players. Complicating this, Players need different levels of detail to allow themselves to project onto their character. For some, a bare bones token is the deal, for others, they need a lot of really cool bespoke detail to get into the game in character.

Which brings me to the thing I built a while back and have been using in my head even when I play VTT. I found a few random pieces of floor tile, see. One was a stony pattern with a hex in the middle and partial hexes going around it to make the square. The other was more of a beige thing, with an intricate diamond in the center and 4 other incomplete squares going around. And I glued them to each other. Clipped the corners, because I do like the "blob" of spotlight effect.

Starting with setting the groundrule for players that edges of the tile are walls, I am able to do quite a bit with it: 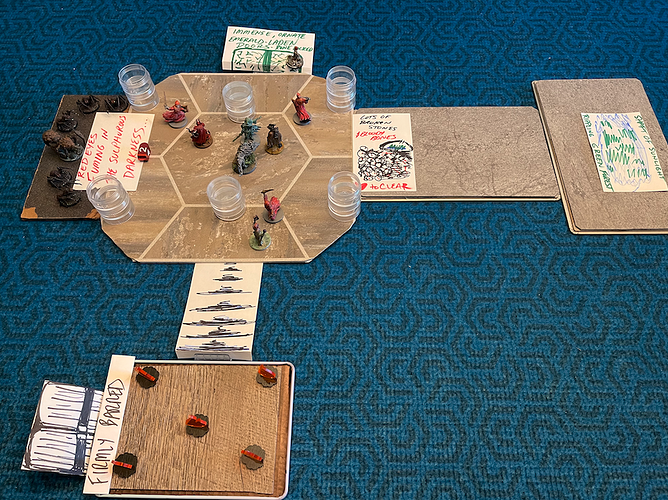 With the Hex face up, I can divide a tactical space into 7 Zones. Easy to keep the Index Card standard spatial representations going. (NEAR is on this card/in this Zone or adjacent to it. FAR is 2 or more zones away. 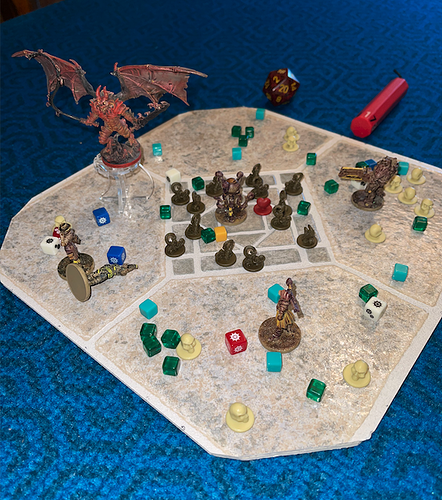 With the center space blocked by tentacles and that bot, this gives a sense of physical obstructions, and the choice to wade into the muck for that health pack, Mr. Handsy is protecting. Using some old Hero Clix stands for flying heroes under the Balrog gives a quick and obvious indication that he ain’t in range of dudebro’s hand axe or whatever. 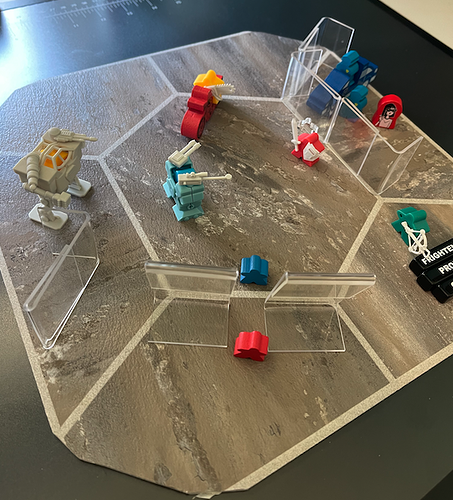 Plastic wallet sized photo frames make great see-through indicators of barriers that won’t get too much in the way of the action, whether it’s representing a literal wall, a force field, or a knocked down building. Meeples are great for uses as central casting city folk fleeing a disaster, etc, and if you crib the ones out of various Tiny Epic games (useless as a board game IMHO, and I inherited a bunch of them, so…) they have tiny weapon holes that set them off pretty cool for players to be able to differentiate themselves.

So there are 3 different ways of using what I’m calling, for lack of a better name, 5/7 Zoned Terrain. I like 5 and 7 because they give good variety without overload. Allows for walling off a Zone space or restricting access to a zone, but also gives players someplace to be apart from up each others’ kiesters in the same little corner of a Location.

Seeing these, it’s pretty easy to go from there to a 3 Zone Tile, an 8 Zone tile, what have you. Why not? The cool thing is when you link them to others and create a dynamic battle field with a single zone Index Card bottleneck connecting a 5 Zone and a 7 Zone. And a little secret you probably figured out for yourself already… You can make a plain grid of this and put it over any terrain background you already have, or, keeping that super old school approach… just arrange Index Cards to match.

At the end of the day, what matters is that everyone at the table agrees on where the walls are, which cool stuff represents them, and which represents the cool stuff they get to beat up, break and mistreat!

What are ya’ll thoughts on this approach? Nothing super new, really, but framed up next to UDT, I felt like it helped me figure some stuff out.

(And yeah… Uhh… If anybody wants to accuse me of making this whole post just to have a reason to play with my table clutter… Well, you wouldn’t be wrong about that either.)

This is great! I really like the UDT, but have a similar concern with the far range. I have been playing around with the idea of blending UDT with Index Card visuals (I really like the black and white with an occasional splash of color) and came up with this: 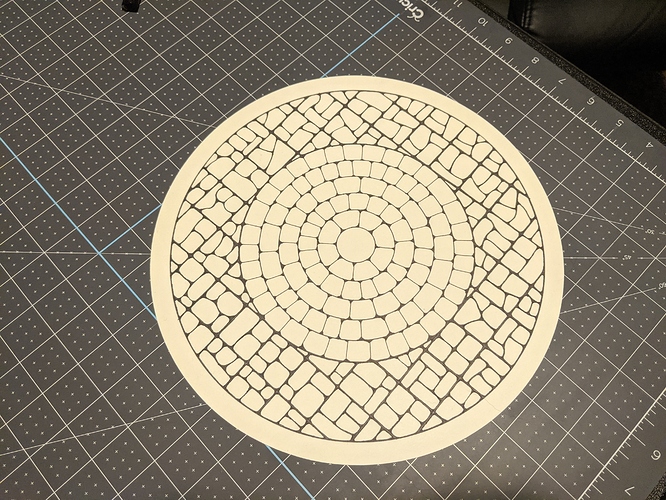 Used a Cricut to draw and cut circles because I can’t. Gridded out the second area and hand drew in the stones. While I am very happy with how it turned out, version 2 will have more than the 3 zones.