My boy is hooked on icrpg. Also, Chimera stats

So, the other day my son (4 next month) joined into my game of four against darkness. He absolutely loved it and was getting into it big time. he has played icrpg in 10minute bits before but not much longer than that. Well today as I sat at the table to sort out my GM’s box, “daddy! I want to play the man game!” and pulled himself a chair to sit on next to me… Improv time.

I grabbed 2 index cards and a sheet of paper and a dungeon crawl was inevitable. I asked him who he wanted to be and he said “rockyrockyO’s da big strong man”, so I googled a d&d goliath and showed him “yeah!!!”. I googled a murloc and told him I was fishyman. He promptly asked for the red d20 and d6. I quickly scribbled stats and away we went. He picked every encounter, sharks, goblins, flying swords, a giant and a Chimera (he said lion-dragon so I went Chimera).
We died fighting the Chimera and he took it like a champ for a kid who hates to lose at things. He has autism so enjoyed lining up his dice before he rolled, knew the math and he even spoke from his characters point of view. It was amazing.

each.
I had found a heart stone so was on 3 hearts.
The encounter was target 11.
I gave the Chimera

This thing annihilated our 50hp in a few rounds. I believe the dice wanted us dead.
Surely this was not an “OP” creature. 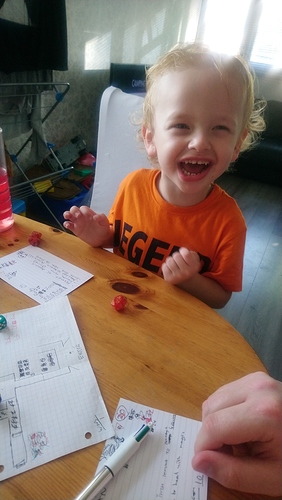 woooweee he looks so happy! Thanks for the smiles and happy story. Curious what weapon he chose or was it bare knuckle? 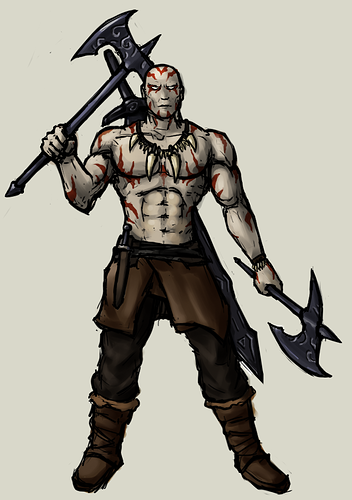 He threw the axes and loved swinging the sword. First thing he said to me this morning was he wanted to see his rockyrockyO’s picture. Oh and he did bite a shark to finish it off aswel.

Amazing! My daughter loves playing ICRPG too. She likes to be a magic ice princess “like Elsa” that always seems to be fighting Wolves and evil snowmen

Here’s to the future of the shield wall

I love this! I’ve taken my 4 and 6 year old through several sessions of “No Thank You, Evil!” During this Covid madness, but would love to move towards something like ICRPG so we get to roll cooler dice and I can tell my wife that all addition practice more than makes up for the violence and poop jokes that it all eventually devolves into. Cheers!

I love that our kids are getting into it at a young age. Their imaginations can go crazy! I played another session the other day outside and Kenny wanted to be a dragon…whos power was to turn bad monsters into sandwiches and muddy puddles… Fair enough

Last night a Chris perkins d&d advert came on YouTube. Kenny turned to me and said"daddy, can we play dungeons and dragons". I was so proud of him. He’s 4 in a few weeks. Going to get him his own dice.

That is so cool!

I’ve run my oldest (4 and a half) through a few No Thank You, Evil! And Tiny Dungeon 2e adventures. I am just waiting for a good weekend to run him and his mother through an ICRPG adaptation of Sunless Citadel.

It is great when they get enthusiastic about these games isn’t it?

(post withdrawn by author, will be automatically deleted in 24 hours unless flagged)

Amazing!!! Great work!! I been trying to ge my daughter to play. No such luck yet.

I’m curious about the sunless citadel in ICRPG. You changing. Anything? Especially for the young one? I wanna run my wife and daughter they too. Some day. It’s a bucket list item for me. Lol

When I played with Kenny I just made everything 10 or more. If it was something other than strength related as he was a goliath it was 12 or more. Gave him a d10 for damage. (I want action and fast gameplay to keep interest. Going back and forth forever chopping away at hp would not hold attention).
Started with 20hp and potions were 10hp and magically appeared around the next corner at times of trouble.

All rolls were player facing. If he missed an attack he got hurt in return.

That was it basically. Thats my goto rules for when I’m trying to read and he comes at me with “I want to play dungeons and dragons” and I have to grab a dice and just instantly play right then.

I will look at sunless citadel. Is it an old d&d module