It’s been a while since I DMed or prepped for ICRPG. By my counts, my last ICRPG game was September 7th!

So I’m hitting a wall on an encounter for the MAGIC adventure I’m running.

The adventure is very much inspired by the Frostgrave skirmish game, so the party is in Felstad, barely after it has begun thawing. My Felstad is basically a giant tower of 1000 levels, around which a city sprouted.

So, the party is on level 777, after taking some dangerous shortcuts while trying to simultaneously evade and beat the Traveler to the top of the tower. From this point onward, I want the tower to be a true test of Magic, and what screams magic more than magical moving stairs?

Each stair would lead to a different trial of magic abilities, and getting from one to the other should be challenging either physically or mentally, in order to test all aspects of the mage. On top of that, it hasn’t been cared for in a thousand years, so probably some magical beasts have gotten, bred and now have upper tower as their home.

I just have no idea on how to put all this in mechanics.

Anyone did something like this in the past? Anyone has suggestions? I’d appreciate it all.

It’s hard to challenge specific skills, even magic, b/c it just boils down to a percentage chance which is a gamble, not a challenge.

My advice would be to instead use themes, like “the challenge of wind” and just fill them up through association. There’s a nice Runehammer video on fire & ice encounters that you can reference.

Also, challenges in general and magic ones in particular I think should be about creative solutions. So try designing encounters &c that don’t have an obvious solution. Like: the stairs are literally moving away from the pcs at the monsters turn - how will you reach them?

The theme is going to be the recurring one: Portals and Dimensions.

I started the adventure with a modded ‘Devious Dimensions’. They followed the Traveler to Felstad. (They weren’t able to stop the Traveler from blowing Splinter open, but followed him to try and catch him.)

I’m thinking the other criminals should be a factor, and I should get an array of differently themed mages against the party, but I also want the beasts forgotten in Felstad to play a part. A 3-way encounter sounds hard to run, but should be amazing to be in, right?

I think you should do some super vertical encounters. Examples

You should also do some portal puzzles, like
5. Two pairs of portals, and a great death ray that fires on a timer. Can be moved and aimed, but ricochets and swivels after each shot.
6. Mirror fight!
7. Find out which portal is correct.

The stairs are to serve a secondary purpose of taking away some Loot away from the group, as they both got too much for finding every nook and cranny (and a lot of it is kinda useless anyway because they wanted to roll and it made sense to find odd things in a magical city encased in ice for a thousand years). Obviously, I don’t want it to be on the nose or punitive. I want it to fit in with the narrative.

So what I have in mind (too bad I can’t draw for shit) is flights of stairs with portals at the top. They are divided in low, middle, high (this will be recurring for this encounter, a pattern of sorts) and these will come close or far from each other round by round. I plan to have them roll for Dimension Hopping (the table in the adventure) for each portal they pass. After they pass it, they roll for effort to see how far up the tower they went. Think each section = 10 flights of stairs. Characters can try to jump from one flight to the other making steady, predictable progress or test their luck with the portals.

And there’s definitely no floor.

3 sections between ‘ground’, one Heart per section. At each ‘landing’ they must shed some of their ‘resources’, to prove themselves worthy of the higher levels of the tower. After they reach the second section, the Traveler will be toe to toe with them trying to get to the top.

First Section, forgotten beasts of Felstad will be in their way. Simple mindless beasts with some weird abilities. Nothing much.

Second Section, they are complemented by the escapees of Splinter, four or five kinds of mages trading blows with beasts and the party alike to make way for the Traveler.

Third Section, the Traveler themselves will be slinging spells - and they will be badass. Party will have to be creative.

Then they get to the top of the Tower. They find out what caused the freezing of the city. There’s where the boss battle will be.

K, so I’ll write down how it actually got to the table. Hopefully someone can make good use of this one day.

First off, I retconned the useless LOOT I’d given them at the end of the session prior. It was mostly dead weight and they told me they’d probably not use it anyway. So I changed it for a more “tailored” LOOT piece for each and on we went.

The stairs were a 3

challenge, and taking inspiration from some old Drunkens & Dragons videos I made it quite video-game like. The staircase ran along the walls in a spiral, and had a hole in the middle, so dropping was quite close to fatal. Each half spiral had a gap to be jumped to the next, like this: 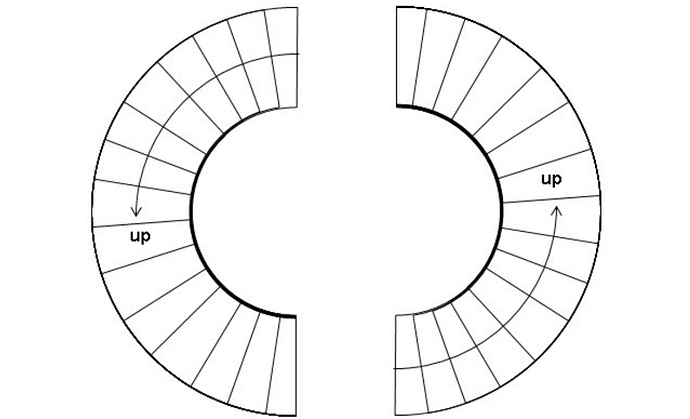 There were several doors along the outer side of the staircase, which were portals to other doors on the staricase. Some went up, some went down. A normal character had to read the ever-shifting runes on the doors to choose one that went up (INT check), and doing so made them go up BASIC EFFORT. The one character that had Mastery in Dimension spells made MAGIC EFFORT on these for obvious reasons.

was populated by Jump Hounds, feral blind creatures that followed the scent of magic and could make short astral jumps (teleports). At each TIMER pop one would come out of one of the doors and attack a character at random, trying to push them off the stairs (as their lair was at the bottom of the pit).
Adjustment to be made after running it: If I were to run it again, I’d make 1d4 Jump Hounds appear. A single one was dealt with easily with their strategies.

As soon as one character passed into the second

of Effort for the Challenge, a Snake Sorcerer (think a Sorcerer inspired by the ‘Eyes of Sett’ adventure) would burst from the wall and block the path. This did not mean the end of Jump Hounds; they were joined by the Sorcerer.

Adjustment to be made after running it: ‘Summon Snakekin’ should summmon 1d4 Snakekin for the same reason as the Jump Hounds.

As soon as 1 character reached the third

of Effort, the Traveler (my modified version of it, anyway) would burst into the tower as well, in the form of a dark purple misty mass. It was violent as destructive. It ascended 1d4 levels (points of Effort) per TIMER pop, and destroyed the stairs where it passed through. Again, Jump Hounds and Sorcerer (given it had not been killed off yet) would continue to harass the party, the Traveler just adding to the complications.
Adjustment to be made after running it: I’d make the Traveler ascend 1d4 levels per ROUND, instead of per TIMER pop. It would’ve given the party a much more intense sense of urgency.

After they got through the last portal (on completion of the

the challenged called for) they reached an antechamber where small Yog Crystals grew. This allowed them to replenish their HP and hearts before the final confrontation with the Traveler.

The Boss Battle itself was a shitshow, so that I’ll leave out of the report. But all in all it was a very fun encounter to run and the players had some very inventive ways of circumventing the obstacles presented.

EDIT: If anyone wants to draw this as a side view, I believe it would be much more understandable. I just don’t have that talent in me.