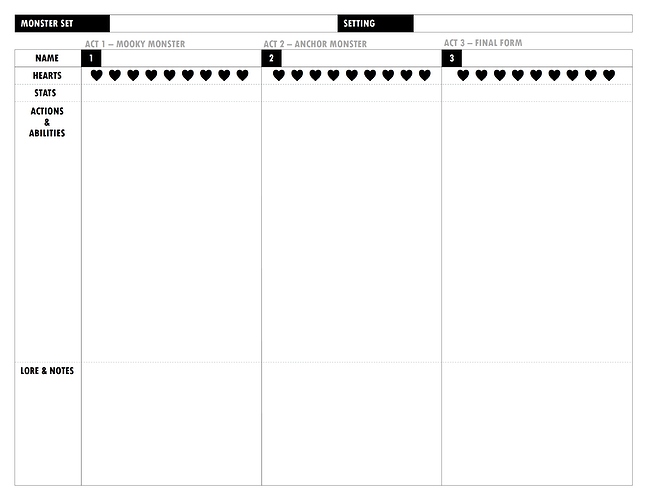 Inspired by RPG Mainframe Episode 13 & Kane’s video and monster worksheet, I’ve put together a little worksheet here that you can print and fill in for your monster sets in case you want an easy reference page with all of your monsters for the session.

Here’s an example using my hell-moths from the abandoned mines: 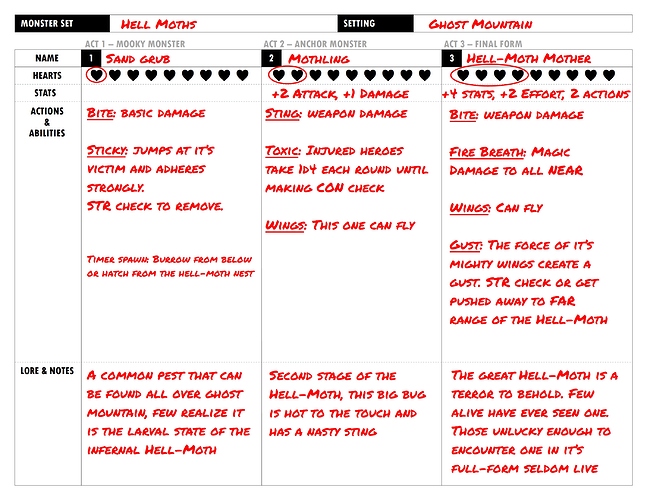 Bonus
Here is a google drive folder with PDF versions and the ODG file that I used to create the template in LibreOffice Draw, in case you’d like to modify it or make your own.

This looks fantastic and I love the Hell Moths set. That’s quite a bunch of monsters I wouldn’t want to cross in Ghost Mountain.

When I ran them, I had the sand-grubs hatching from 1HP egg-sacs, had hell-moths flying through the tunnels in the mine cart descent, and then had the hell-moth be a solo-boss with a nest there in case I needed to hatch some grubs.

Ended up without combining the monsters much, players only faced one type at a time, and my players managed to come out alive. The Hell Moth (totally not a dragon…) brought two players to 0hp with its fire breath, which I had recharge on a d6 timer. I think when I try running it again I’ll combine the monsters more and I’ll probably have to turn some dials back a bit to compensate.

I always wanted to make something like this but in a wide bookmark format to use in my books and keep on the table for quick reference… this template may be the inspiration I was looking for… Game On!