hello to all who read this. I’ve been mulling over A monster hunter (like) setting.

I’ve Got a map idea jotted down with would cover the exploration, tracking monsters, varying chances of monsters appearing based on distance from its nest and other monsters possibly appearing when timers run out.

so the other design point is i’d like monster to run an an AI and be tough. You would only ever need to kill each monster once but you mioght not be geared up to fight it the first time you come across it. and so i’d like people to be able to learn how a monster behaves.

This was my first attempt, and it has the basic elements i was looking for except it is messy and perhaps hard to follow
• you start at stat and each square box is an monsters turn and on the next monsters turn your move to the next square and perform it’s actions. this monster has special tail and head attacks. and if those parts get broken then you would follow the line labelled 2 instead. 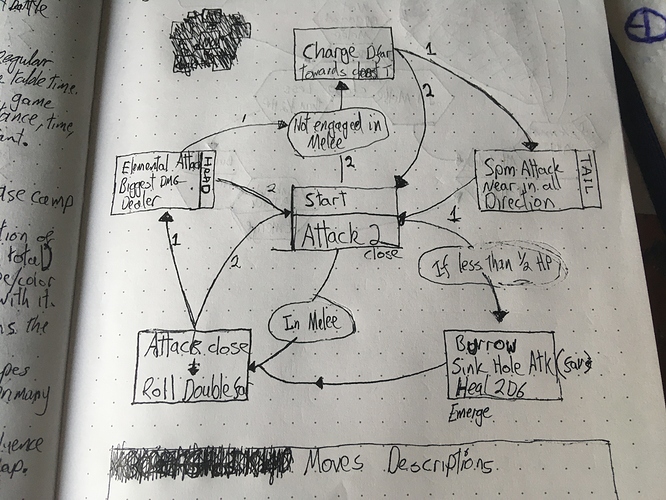 then i saw this thread. Random Monster AI (Stolen Idea) and it gave me the idea on how to display it better.

The 2 major changes here is that with a hex grid GMs could develop there own monster ai pretty easily and with the hexes touching there is a reduced need for arrows. in this latest iteration, if the next move was to use a body part that had been broken, would would skip it and move onto the next move. I kinda see this used in practice with a little token moving from hex to hex. 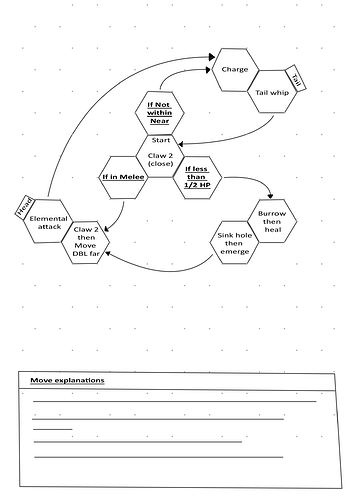 the moves and stuff are totally placeholder and for demonstration purposes only.

so what do you think. could this AI system work for a big boss battles?

I like the campaign idea.
As for the AI, if you intend for someone else to use it, you should make sure that there are no ambiguities. For example: being in melee and at half hp are not mutually exclusive.

The format itself is interesting, but probably not necessary unless the pattern is much more complex. In the example, it appears the monster basically charges and attacks, then attacks and retreats. This is a good pattern, but doesn’t really need a tracker (at least for me).

You are right some priority is needed in some instances.

Yeah it’s kinda basic as an example though I don’t know how much more would be realistic. As is to see all that is 7 rounds of combat.