Hey everyone! Hope you’re all doing well during this apocalypse crisis.

The mission here is to create fun ways for player characters to acquire spells and magical loot through out a campaign.

Here are examples of this from Seasons 1 & 2 that our man @Kindred compiled into PDFs for the community.

I can’t wait to see people’s posts this season. 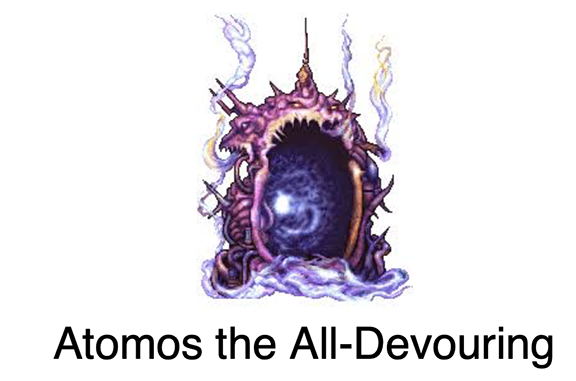 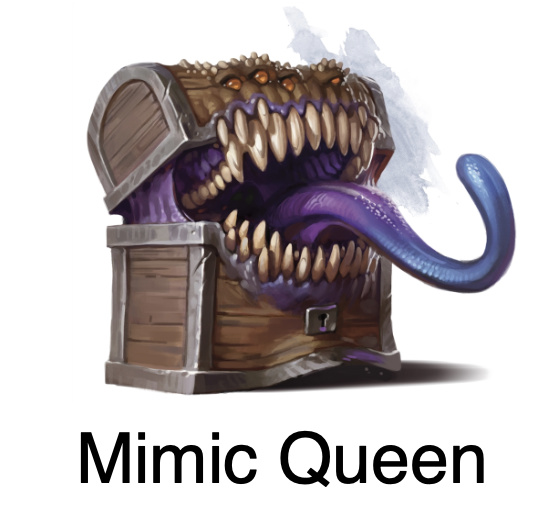 First Encounter
Found near a source of magic (Mage tower, dungeon, crystal cave, Zombie Graveyard, etc.) A large chest the party finds is a massive version of the classic Mimic Monster. This monster introduces itself as the Mimic Queen and strikes a bargain with one of the party members. The Queen feeds on magic and gives the player one of her many eyeballs that when put inside a container will turn that container into a mimic monster and any magic it feeds on from the environment is transferred to her remotely.

Problem
Needs to feed on magic aura that radiates from magic environments to grow stronger.

Needs
The player to take her eyes to environments rich with magic where they can devour energy for her.

Rewards
Each time the player finds a suitable place to create a new mimic they will be rewarded and then given another eye.

Communication
Creating a mimic with one of the eyes allows the player to communicate with the Mimic Queen directly.

Enemy
Thieves Guild - They seek the Mimic Queen’s treasure and have been hunting it for generations.

Allies
Gelatinous Cubes and other Slime like enemies are friendly to mimics and may aid whoever holds the Mimic Queen’s eye.

First Encounter
(A dungeon, castle, or graveyard)A PC finds a sword hilt with no blade. The hilt is beautifully crafted and while admiring it a LARGE viking ghost appears in a drunken stupor. “She was beautiful! Look what they’ve done to ‘er!” The viking ghost introduces himself as Thunder Head the hero of legend and wielder of <insert sword name.> He explains that he died X years ago from a mortal wound after an epic battle with <insert monster> He managed to kill the beast but the final blow shattered his great weapon. The weapon was made from a meteor that crashed from another world and the hilt will resonate when a fragment is nearby. He asks you to restore the blade to its former glory.

Needs
The PC to find the sword fragments and make the blade whole again.

Rewards
Each time the PC finds a fragment of the blade it instantly attaches itself to the hilt.

The sword gets +2 to all its rolls for every fragment restored to the hilt.
(Attack attempt and Damage)

Communication
Thunder Head’s spirit can always be summoned outdoors if his name is shouted while holding the blade above one’s head. He always appears in a bolt of lightning striking the ground. Thunder Head is old and knows many things but is unaware of the current state of the world.

Enemy
The sword fragments are in the hands of strong enemies to the player party. They will not part with their fragments willingly. Most of the fragments have been added to new weapons for their rare meteor properties.

Allies
Vikings, Dwarves, or Barbarian like cultures will recognize the hilt as the weapon of the legendary Thunder Head and may aid it’s new owner. (Some may want to steal it too so beware) 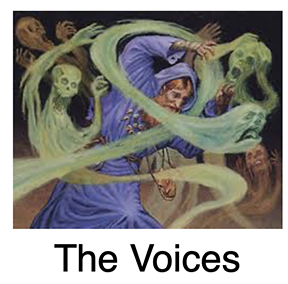 First Encounter
You were once a powerful mage but <insert event> caused you to become possessed by multiple spirits. All the spirits whisper and moan inside your mind causing you to no longer know which voice is your own anymore. In your madness you forgot all but three level 1 spells.

Problem
The voices, you don’t know who you are anymore. Were you a good person? A bad person? Are you just another spirit torturing this human host?

Needs
Each spirit voice wants something, it is all they talk about. Most of them want closure from their deaths. Revenge on their murderer. Is their family safe? Confess a love to a man/woman. Repay a coin debt. Etc etc.

Rewards
After giving a spirit closure the voice goes away and the player remembers another spell.

Communication
The spirits are always talking, you are in constant communication with them. Most repeat a single or multiple phrases over and over and can’t be reasoned with.

Enemy
You were once a powerful mage who had powerful enemies. These enemies still pursue you to this day but you have no idea who they are or why they hate you.

Allies
Bringing closure to a spirit will sometimes create bonds with their friends and family who appreciate you bringing the dead loved ones justice and or peace.

I have these few compiled into the template while we wait on more entries. I’m trying to think of another but my mindset has been in other genres lately LOL.

Theres no reason to limit this to just fantasy sword and magic. Id love to hear anyone’s ideas.

This community is so darn creative, I know you all are holding back on me here lol.

The Wood Nymph Mother tries to seduce any party member with an edged weapon and impression them within a living tree. Any Party members with no edged weapons Need to try to convince the Mother that the whole party are friends of the forests.

With the races insatiable need for lumber, the once great forests which used to go unbroken across the continent have now been divided. For Nymphs and all Fae kind to survive the forest must be relinked.

The Mother wood Nymph needs her seeds (ten) transported and planted between the great forests so that her children can grow and then tend new forest bridges across the land.

While the group carries any of the seeds, the party will never want in forested wilderness (they will always have warmth, food, drink and safety) because the Fae will see the party as friends and will endeavour to keep the Mother Wood Nymph seeds from harm.

The Mother Wood Nymph can project her likeness in any forest clearing in a whirlwind of pollen. She can make the images transmit information through gestures and sound.

The various races leaders who wish to expand their kingdoms by replacing forests with farmland and wooden construction of forts and buildings.

Thanks for the submission @Dragonlair!

Be a great patron for a druid like character especially in a campaign that features an industrial or mechanical themed villain.

Hope to see more submissions from the community!

First Encounter
Spirits from the spirit realm are crossing into the physical realm and attacking. Defeating a spirit is only temporary as they return every full moon when the veil is open. A PC will find a shrine dedicated to Atomos the All-Devouring where Atomos will propose a method of permanently defeating a spirit by having Atomos devour the spirit’s soul. If the PC agrees, they will learn a summoning spell which will summon Atomos and a Binding Glyph spell that traps spirits within the glyph if they enter it for a period of time.

Problem
Spirits have left the spirit world and have come to the physical realm. Atomos wishes to feed on them while it has the chance.

Needs
The PC to bind a living spirit with a spirit trap and then summon Atomos to devour it.

Rewards
Each new TYPE of spirit the PC feeds to Atomos will reward them a new spell.

Communication
Atomos can be summoned at any time via the summoning spell. Waste Atomos time and it will consume a random piece of loot.

Allies
Permanently eliminating a spirit will earn friendship and aid from the people who were being tormented by the spirit. Worship of Atomos may grow if word gets out that Atomos is the answer to their prayers.

Thoughts? Feed back is welcomed!

Please feel free to post your own ideas in this Topic! This community is bursting with creativity!