This is season 2 of my first topic on magical patrons where I share entities that hand out spells and loot to those that help them with their unique problems.

As always I hope other members of the community share their patron ideas in this topic. 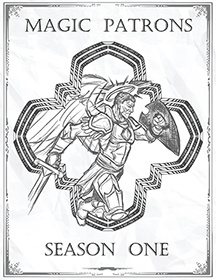 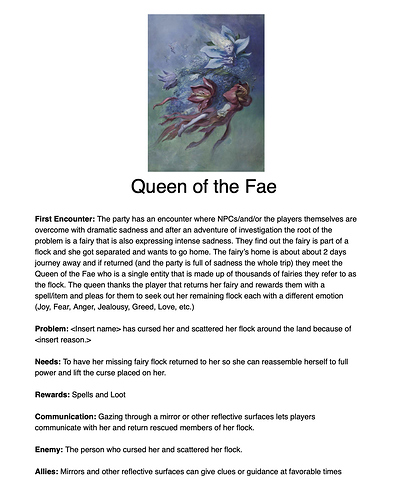 I dig what you did there. They are campaign generators all by themselves. If I had one wish it was version as PDF or Word or Google Doc so one could easily copy paste and edit the entries. So much cool stuff. 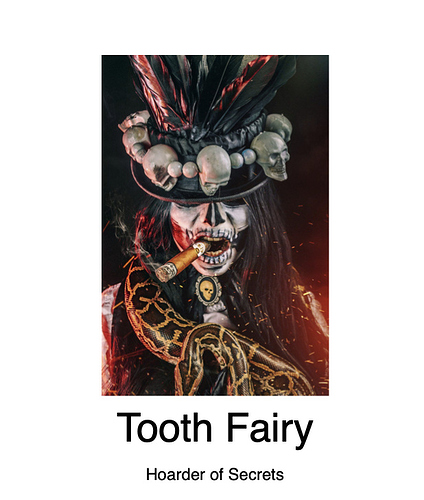 Screen Shot 2020-01-10 at 10.18.29 AM.jpg618x728 117 KB
First Encounter: A player somehow finds a tooth from a monster or someone of importance and if an npc sees the tooth they tell you that you should put it under your pillow at night and get some coin from the tooth fairy. When they do they have a dream of a voodoo witch doctor who is impressed with your tooth offering. He won’t tell you his true name but that you can call him “the tooth fairy” as he cackles with laughter. He has the power to draw all the memories from teeth and learn the owner’s deepest darkest secrets and people willingly give them to him for some coin. What a scam! HAHAHA. He offers you a deal to find teeth of people of importance and in exchange he will reward you. If you agree you are given your first reward.

Problem: Powerful entities want his secrets that he greedily keeps to himself.

Need: Teeth of important people so he can learn their secrets.

Communication: Place a tooth of an important person under your pillow and the tooth fairy will appear in your dreams to negotiate your reward.

Enemy: Multiple powerful mage/monster/kings are desperate for answers to <insert problem> and the tooth fairy refuses to share. They notice you collecting teeth and begin to hunt you and get the information they want from YOU instead. Desperate people do desperate things.

Allies: Snakes, Rats, and Ravens are agents to the tooth fairy and could provide aid. 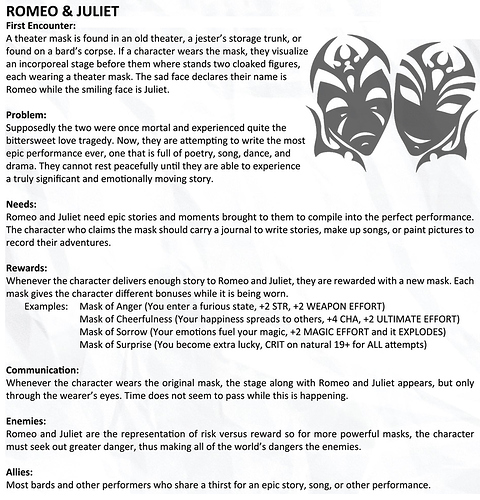 Thanks for the great entry @Kindred

Could see the progress of writing being done in hearts of effort maybe after being inspired by the party’s adventures.

Very creative, thanks for sharing.

@Kindred is an awesome guy who compiled all of season one’s entries into an easy to download pdf file for the community. 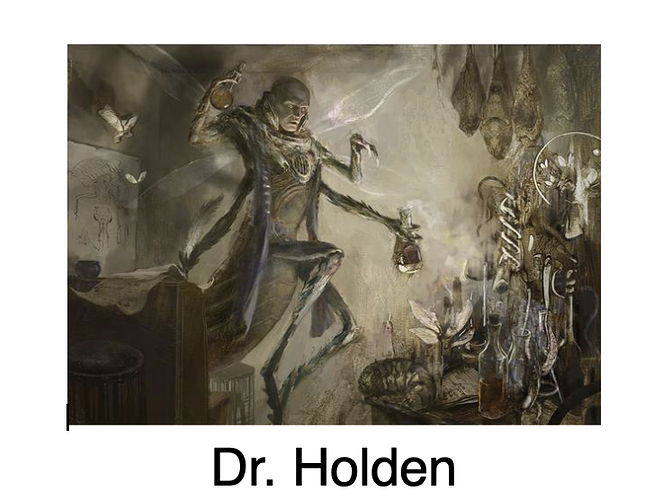 Screen Shot 2020-01-15 at 1.41.27 PM.png738x556 371 KB
First Encounter:
A player comes in contact with an evil monolith that is being worshiped by a cult. After awhile they begin to hear voices inside their head chanting the same thing over and over. Once they visit town and go to sleep they wake up on an operation table with their hands and feet bound. Terrible, annoying, opera music is playing from a record player in the room adding to the confusion of the situation. A large half-insect half-man hybrid looms over the player with tools and potions in each of its strange hands. A large pimple looking thing located on its chest is surgically sliced open and a large maggot is extracted with a tool and placed into a potion for stirring. The now chemically infused maggot is then placed into the player’s ear and their whole world becomes pain till the player passes out. Upon awakening the strange insect hybrid pops a cork of champagne and in a regal and sophisticated voice cheers “Ureka!” The creature introduces themselves as Dr. Holden and he too became inflicted with the voices of the elder god the cults worship. He has resisted the call of the dark lord for months and had dedicated his resources to finding a way to silence the voices completely. He states he performed a surgery on the player to rapidly slow the rate of the corruption and needs your help to see his research to completion. Both of your lives depend on it.

If the player agrees Holden teaches the player how to conjure an insect familiar that always spawns in disgusting ways from the player’s body, usually crawling out of the player’s mouth. Treat it as a level 1 spell. (see Rewards)

Problem:
He has been corrupted by an Elder God who is driving him mad and wants to make the voices go away. He will not let them win, he will study other victims to the voices and open their brains up and see how to remove their influence. Subjects have to be alive while he probes their brains, and death seems to be the only release from the voices so far. Listening to terrible music does seem to help drown out the voices though.

Needs:
Writing from the monoliths found around the land that the cultists gather and worship at. There must be clues in their mad writings to sever the connection to the elder god. Each time the player comes in contact with another monolith they become more insect like.

Rewards:
Dr. Holden will teach the player how to tap into the elder god’s power and harness it.

Communication:
Holden can be communicated via the player’s insect familiar.

Enemies:
Cultists and other victims to the Elder God, they fear Dr. Holden because he hunts them for his experiments. They plot against the player who works with Holden.

Allies:
Insects who strangely seem drawn to the player can be useful at times. Think a line of ants pointing the way to a current goal. Is this the call of the elder god?

This is fantastic, thanks to both of you!

Thanks @Chaosmeister I’m glad you your enjoying the entries.

Hopefully some more community members share their creations too!