Hey a submission! And a damn good one too!

Love everything about, the clash between fire and ice, the hunting of ice elementals, and the fellowship of the Northmen.

Thank you for the submission @Delusions

Feel free to post anymore patron ideas @Delusions I hope more people jump on the wagon and post some ideas too. This community is flooded with great creators.

Best thing I’ve seen on the forums in awhile.

Thanks man, I appreciate the positive energy.

I updated the OP with links to the entries.

Don’t be shy people, share some creations with this awesome community.

im leavin a comment here so i can get updates when you add more here. these are fantastic!

These are awesome. As for not having much interaction with a Patron or God during a game, I feel that falls square on the GM’s shoulders. A GM should take that deity and use it the same as any piece of backstory or player connection. Hell, a Patron or God is a perfect chance bargain with a player- “do X for me and prove your fealty.” Then give them a reward. It basically writes itself, hehe.

yeah the GM makes or breaks most games.

From my circle of people many shared similar experiences with their patrons being a cliff note and thus what sparked this topic to hopefully help inspire ways to give them more of an impact in the campaign. 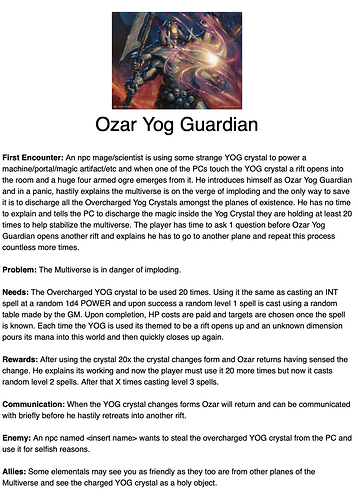 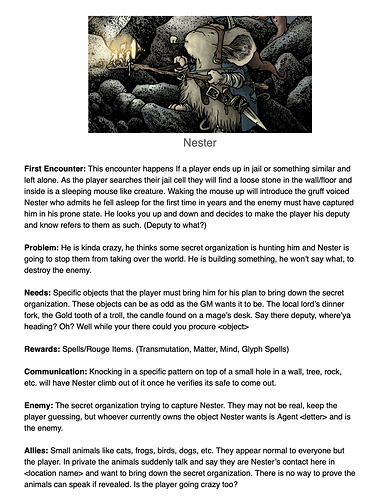 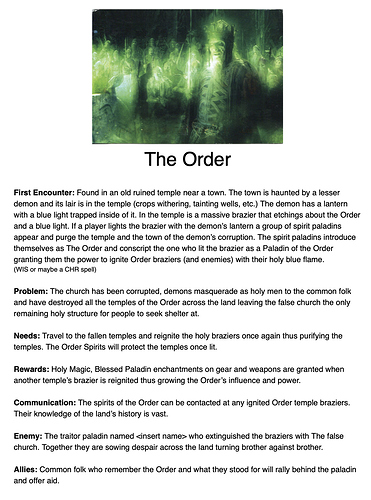 #19 Nicodemus and the Elder Stones 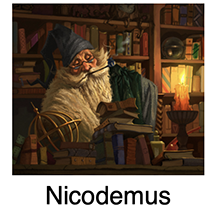 First Encounter: The players find a young wizard copying the writing of an ancient stone to some parchment. He explains the stone is called an elder stone and his master Nicodemus is studying them in hopes to unlock the secrets of the universe. He says he is trying to learn how to read them himself but his master says it’s too dangerous and he isn’t ready. He is confident he is ready and traces his finger on the letters and tries to speak the words to the party in hopes to show off. After a few words he stumbles on pronouncing one of them and then suddenly bursts into flames. Not to far from his charred corpse is a portal drawn with chalk that leads to a wizard’s study where a great white bearded wizard is deep in concentration. This is the great Nicodemus, and he refuses to look up from his work and will refer to anyone speaking to them as Jarvis and say he has no time for badgering and to bring him the next elder stone’s writings. If anyone gives him the writings of the elder stone he will be excited (still not look at the party) and say “Good work Jarvis! Now lets see what it says.” He will then explain its a level 1 spell called <insert spell> and its very basic and you cast it by doing X Y and Z. Are you paying attention Jarvis? Ok good. Get some more chalk from the table and go bring me back another stone’s writings this one was no good.”

Problem: Trying to decipher an elder stone and unlock the secrets of the universe.

Needs: “Jarvis” to copy the writings of other elder stones and bring it back to him to help create a cypher. Elder stones are scattered across the land (dungeons, gardens, mountain tops, etc.) and have ancient writings engraved into their surfaces.

Rewards: Nicodemus will find a spell somewhere in the writings the player brings back and teach it to them all while never making eye contact with them. The spell can be from any school of magic

Communication: Drawing a doorway with chalk will lead to Nicodemus’ study. He will always refer to whoever is talking to him as “Jarvis” and never look at them.

Enemy: The REAL Jarvis, Nicodemus’ old apprentice left when his master wouldn’t pay attention to him and decided to unlock the meaning of the elder stone first in spite. He will create obstacles to protect the elder stones from the players. He is a competent wizard and shouldn’t be underestimated.

Allies: Elderly people. In their youth Nicodemus helped them or their village from some threat and will offer aid to any of Nicodemus’ apprentices.

Weird, I can’t seem to edit the original post to add Nicodemus and his link to it.

update Alex is looking into the matter

I had that issue on one of my contribution posts where I was going to just edit it every time I had an updated piece of material, but when I asked into it, the problem what that the site is set up so you can only edit for a certain period of time after the post is made (example: 30 days or something).

Yep that seems to be the case Alex was just explaining to me, Looks like posts get locked after 2 months unfortunately.

Yeah I would suggest making one online folder for it all, share the link, and just add a comment whenever you add to the folder. OR make completely new posts each time, but if you’re like me, you don’t like clustering the forums LOL.

i agree, uploading everything into a google doc or something would be great, that way you only need to add a comment with like a reminder to check the google doc for an update… maybe a little teaser into the new material. plus it makes it easy to reformat things if you so choose

So, we learned two key pieces of information. Discourse will only allow 30 edits to a single post, and all responses are locked and cannot be edited after two months.

So, I think the community solution of a google doc would be a good one. In any event, this is an awesome thread, and I don’t want to see it wither.

Same! I don’t want to see this post/ line of creativity wither either. There is definitely some awesome stuff in here. maybe to allow more edits and changes you could create a new post for the next batch of magic patrons (a season 2 of the series so to speak), and perhaps include a link to the old one so you can come see the previous ones as well. You know it is a good thread when it can’t be contained in just one post… it demands a sequel!

Thanks for all the words of encouragement everyone, I assure you I won’t let the topic wither. I’ll come up with something this week or so.

Also am planning another angle for the topic to hopefully encourage more people to create their own patrons / gods / etc and add to the conversation more by posting some art online and asking the community to name them, and come up with who they are and what they want.