I wanted to get some feedback on a movement-tracking concept. I’m working some low-prep combat mapping concepts out of some familiar territory, namely using Zones and CLOSE/NEAR/FAR reference. 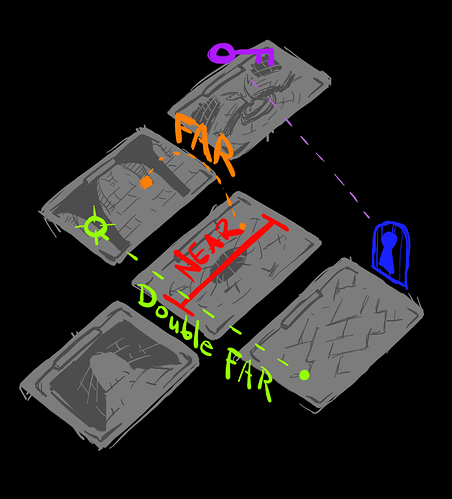 I’ve started to try out using cards to track areas and movement:

I’ve started to write down bullet points on the cards for what’s present in the Near area: stacks of wooden boxes, tattered banners hanging on the walls, etc. These can be as thematic/detailed as someone wants. Nothing new here if you’re familiar with Zones. I like sprawling narrative scenes and big maps are too clunky and time consuming to create.

Players can move into an area by dropping their token on the card, and they can treat any other token on the card as Close or Near. Close becomes negligible since players just run up and attack when they want to, and since tokens on a card are all Near everyone is reachable by closing in to attack.

The goal is to make a model that supports environmental narrative, takes very little prep time, and allows maximum flexibility so folks aren’t chasing down pre-made maps that fit their concept (or worse yet, changing their concept to fit a “cool map” they found). It also has to be compatible with ICRPG’s model of play. None of this is new, but the presentation/method of the disjointed pieces may be.

Yay? Nay? Since it’s a pretty familiar set up it’s basically 1:1, but maybe there are some pitfalls I don’t see just yet. I’m working on a setting using this method and before I get too deep I want to make sure it doesn’t break down anywhere before it begins.

Fits right in to the ICRPG model and aesthetic if you ask me.

It works. Here’s the whole town of Ynsmuth: 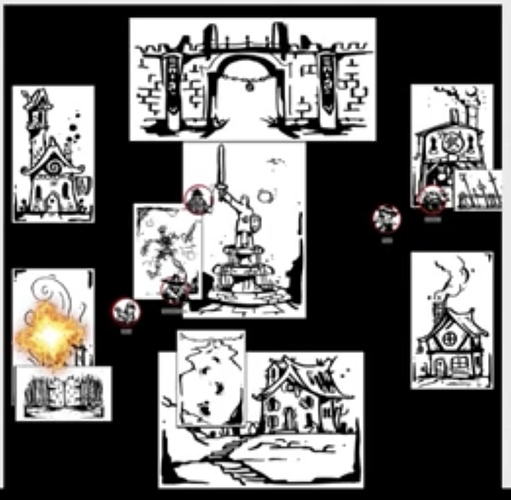 The gates, town square, the blacksmith shop, a villager’s house, a potion shop, the church (barricaded with zombies inside), and tracks leading to the creepy house on the hill.

It’s a far move to jump cards. And anything “near” is just nebulous space … no major tactical play here.

This was a night of play for us with the incomparable Matt Shaker in the DM seat.

Definitely a yay on my end. Love the graphic as well, makes explaining the movement system quick as a flash. I think any pitfalls will probably be more likely to reveal themselves during play, and may even be group specific (at least that’s been my experience when I introduce abstracted rules like this). Always tough to imagine what those players will get up to until they’ve gotten up to it!

I like it, @Chaologic. It does present some common options well.

Just to clarify: it takes my whole turn to move from one card to an adjacent card? From Quickstart 2E: “MOVE FAR: Use your entire TURN”

Yes indeed, unless you’ve got other abilities that allow extra movement. Since the space between is abstracted and the cards represent anything from twisting city streets to a warehouse full of stock, you could give players the opportunity to “free run” to the area and not cost movement to that area. Check a physical ability against a TN and see if they made it smoothly if you want even more movement.

nice and how would you handle scouting?

I think that really depends on how you want to run your game. I’ll use the context of a dungeon crawl since that’s familiar territory. 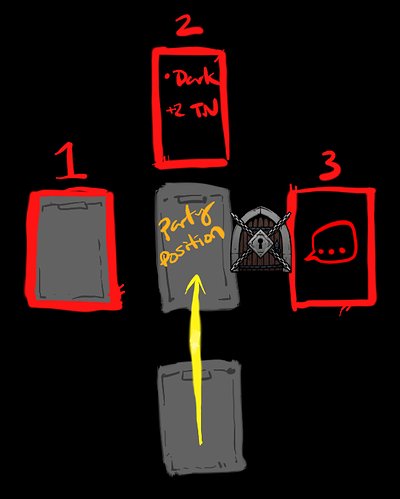 Personally, I’d lay out the dungeon for myself, then as players move through I’d place the cards down like revealing a fog of war. They could take peaks into adjacent rooms for intel, or just ask for a layout. All of a sudden it’s really easy to track down explorable areas, go one area at a time for details, and even track for patrolling opposition.

Lately, I’ve been kind of inspired along these lines by comic/storyboard panels and oddly enough, The Shining board game.

Something like this as the base setup, then drop cards into place as sectors are encountered and shrink to fit their space when they are no longer the predominant focus. 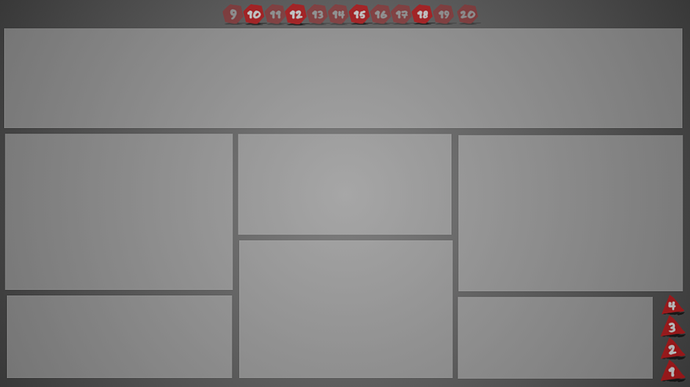 Of course it can be less complex than this. Used this one with a long overland journey, with various stops and situations being dealt with.

@Chaologic thanks for the detailed insight on how scouting would be tackled. Plenty of options there without adding much complexity.

@Lon, in case of the Shining boardgame I suppose the rooms art/names are already revealed in the board itself (though maybe not described…). In a RPG context, would go for the option of having them hidden at the start and only “fill that slot” when the party explored and left the room for the first time, or have all pictures available from the start, like a map?

Makes sense, depending on your tech savvy and the capabilities of the particular VTT. And also how familiar the PCs are with the area.

With RHVTT I suspect it would be easier/less pre-work to drop cards as revealed, rather than have them all pre made on the background, then covered over with a disposable obscuring card.

But there are lots of times when discovery of the places isn’t the point. (PCs defend home town against Xenos in a one shot, or PCs explored this area in an earlier session, and are revisiting it for a wild orc chase or siege or something.) For those kinds of things, labels or revealed art makes sense and keeps things moving—letting the players have a cheat sheet as to what their characters already know.

Moving between index cards and using timer dice are the key ICRPG concepts I leverage into many other RPGs.

Restricted movement between cards is cool in any situation where players have to choose what to engage with, and are confined in how they move between those things. It doesn’t just have to be spatial confinement, but 99% of the times it will be.

I use the following

When you move, place your mini so that it touches your destination.

I don’t have a need for Double Far explicitly, as the above covers all distances present in ICRPG. Also I add the Near rule because I have games where moving Near or away has an effect (attack of opportunity). This is where the large size of ICRPG index cards come in handy. Plenty of space to show which minis are touching and which are not.

As I said, 99% of the times the card layout represents spatial areas. The 1% includes anything you can think of. Example: Your situation is a tense negotiation. Your play area is a line of cards going from smiley to frowny face. Players can ‘move’ from ‘good cop’ to ‘neutral cop’ to ‘bad cop’, and the actions available to them are listed on the card. (for example, intimidate is on the furthest frowny face. Persuade is on the furthest smiley face, to borrow some DnD skills.) The gist that this communicates here is that one character cannot just move from good cop to bad cop and act upon it in one turn. They would lose their credibitily. Team up with another player however, and you have more flexibility.

@Chaologic touched on an idea with the locked door between zone cards. There are several kinds of obstacles that could require checks to move from one zone to another.

Additionally, since space is abstracted it is not a far jump to go 3D (assuming your gaming medium supports it). The first possibility that I can think of is a see through plastic layer elevated by posts. Now the upper floor zones looking down on a central chamber zone look the part. If you can draw on the see through layer, then you could create air zones for flying creatures.

For an adventure at sea, I had thought of making three types of index cards with images, a series for the surface of the sea, with maps illustrating waves, or just an iceberg,

The second series for what is under the sea, like a wreck, a giant octopus or just a shark.

The third series for the sky above the sea, with maps for dark clouds, a passing albatross, or a strange individual on a flying carpet.
I advise you to shuffle the cards “under the sea” and place them face down as long as the trip lasted, for my part, say one per day. Then shuffle the “over the sea” cards face down on the cards you have already arranged in the order you wanted. After you do the same for the “sky” cards. The boat of the adventurers can choose which three cards they will sail towards, a character could see in the distance, the sky card of a pack before even moving. Seeing dark clouds, he might choose another package. But to see the card “on the sea”, the character must have some equipment and see that on the sea, it will be an island … when you go to the island, take a random monster card. You are lucky you took the card of the titanic gorilla.