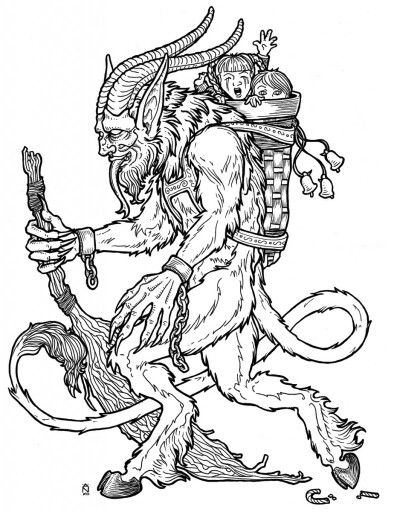 Inspired by PDM’s video, here’s my one-page version of Krampus for ICRPG.

You can download a PDF version on the link above.

Everyone knows that Santa brings presents and joys to children who were good boys and girls this year! But what no one talks about is… What about those who misbehave?
The Krampus is a horned, anthropomorphic creature who, during the Christmas season, scares children who have misbehaved. Assisting Saint Nicholas, the pair visit children on the night of the 5th December, with Saint Nicholas rewarding the well-behaved children with modest gifts such as oranges, dried fruit, walnuts and chocolate, whilst the badly behaved ones only receive punishment from Krampus with birch rods.

ADVENTURE HOOKS
Krampus will visit your village this Solstice!

The Classic Bit. In a small, isolated village, just before the Solstice, children are disappearing from their homes. The villagers tried to look for the children but didn’t find them in the forest and wilds near the village and couldn’t go very far due to the wolves and other dangers of the region. They need Heroes to find the children – they need YOU! In this story, Krampus starts kidnapping children around the 5th December and plans to sacrifice them during the Solstice (21st December). The GM needs to decide when the PCs are contacted by the village and how much time is left before they find Krampus’ lair and save the children.

The Sins of the Fathers. In this variant, Krampus is still kidnapping the children, but not because they misbehaved – it is their parents who are full of secrets, lies, anger, and envy. The taking of the children is meant as an opportunity for the parents to repent, ask for forgiveness, and sacrifice themselves to save their offspring.

He’s Not Alone! Krampus is a kind of magical Entity (ICRPG Magic, p. 75) who gains access to the Material Prime near the time of the Winter Solstice. With him come the dark elves who serve Krampus! These dark elves are more of a joke than a real threat from the faerie realm – use goblin stats (Core 2E, p. 116) for them, but make them get in the way a lot!

GRAB AND STUFF: The Krampus grabs someone and stuffs the victim into his sack, where the stuffed creatures will suffer half MAGIC damage (1D4+2) every turn until they can escape. A HARD STR Check is the only way to avoid this fate.

NICE OR NAUGHTY: The Krampus stares deeply into one’s eyes and knows his sins for the past year. Declaring them out loud brings feelings of deep shame to the target; make a WIS or CHA Check to resist or all Checks and Attempts are HARD for 1D4 Rounds.

MAGIC RESISTANT: The supernatural nature of The Krampus fizzles many SPELLS. Magical effects and damage are always reduced by half.

NEW LOOT!
1: Krampus’ Birch Rod: Weapon, Can’t be Concealed, Can’t be Sheathed, Deadly, Large, Sturdy. Causes Weapon Effort +2 damage and grants the Detect Evil spell – point the rod to the target to use it.
2: Spell: Christmas Lights: Just like the Seekers spell (Core 2E, p. 46) but Christmas-themed. Costs no Energy (no HP cost, no spell burn, etc.) to be used during the month of the Winter Solstice.
3: Krampus’ Cape: Armor, +2 Armor.
4: Krampus’ Sack: Item, causes the same effect of The Krampus’ Grab and Stuff attack, but can hold only one victim at a time. Alternatively, the target can be hold without taking damage indefinitely.

I actually laughed out loud at this

Seriously though, this is great!

Hahaha, glad you liked it, but I didn’t come up with it; that one’s on Professor Dungeon Master, from the Dungeon Craft YT channel

His video heavily inspired this build!

Nice! Well I appreciate you being honest about it

I’ll have to go check the video out!