Does anyone have any methods for tracking combat HP/hearts with multiple enemies? I had a big game with many players and they got ambushed. Any apps or software that helps with this??? thanks kz

Would it be possible to hear more about the situation? What kind of enemies? How many? Etc…

I just ask because that can inform the response because to me, it sounds like something I would separate Big Bads out from the Mooks and give the Mooks all 1 HP and only track Hearts on the Big Bads.

Hahaha. Yeah. How many enemies are we talking here? I usually just keep track in my journal, maybe drawing little hearts and filling them in when monsters take damage. At the table, I typically just go left to right across the map, which corresponds with left to right in my journal. With a VTT, I just keep track with the tokens. I typically count up instead of down. When an enemy reaches 10 or a full heart, it dies. Sometimes I’ll call it at 9 or so if there is a particularly vicious hit. Or, I have even reduced the game to successful hits. Take three successful hits, and the monster is toast.

Gotcha! Yea sorry for that. So first encounter was an ambush outside the gates of Ravenlott. There were 6 possessed goblins. Three archers/three close combat. All one heart/10hp. There was the leader as well who had 15 hp or 1.5 hearts. 7 enemies total.

Classic! If it were me, I would make all the mook goblins 1 HP/ 1 Hit, but the Archers would be HARD to hit from a distance. The Leader would have 1 Heart and a power or two. I’d also be calling in more goblins every round to keep the players busy until they could take out the leader haha. 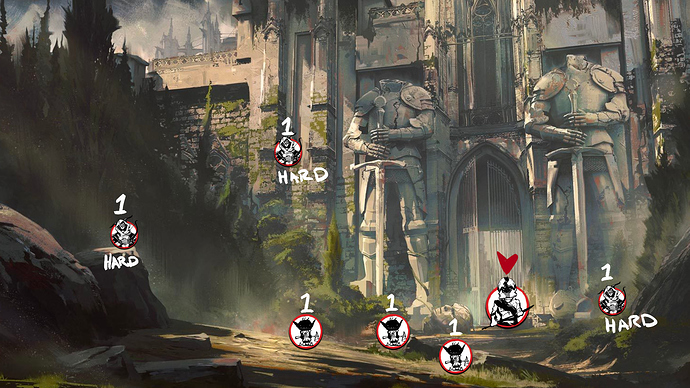 Brilliant. The kids were learning the mechanics. Kind of a earn while you learn lol. That is almost exactly as I made it. You can see my pics of the encounter on my previous post. But i like the idea one hit kill!

First option for me, and easiest to put in place: I’d run the minion and varmint level baddies as Mobs. Stat them as a group.

*Example: These PAIRS of Mercenary Archers share 1 heart of HP, are HARD to hit WHILE well camouflaged, 2 attacks per round, +2 to hit, d6 damage. There’s a pair on the left in the bushes, and a pair on the right in the trees. When 5 hits is done, maybe one falls from the trees dead and the other one now fires off two arrows per round, feverishly. And if 9 points was done in a single hit, maybe the one they hit is dead and the other is in high retreat!

Second option, and maybe not to taste for every GM, is to steal a page from Tiny Dungeon and don’t bother with the math at all.

*Example: There’s 2d6 Goblin Clubcrunchers and they are disabled on any hit. But it will take 7 hits to take down their Ogre-Magi friend.

In bigger battles with lots of different units, I actually scale this out some and can make it mechanically interesting with this kind of what I call “Quantum HP” … while still saving myself a LOT of cognitive load. You can even add bits of Monster AI in.

*Examples:
The Bloodoath Mage’s Homonculus is protected by a spell that allows him to completely disregard the first hit he takes, and to be completely immune to that type of damage for d6 rounds. It will take 3 hits of 5+ damage to kill him.

Aulicustinda the Black Dragon is a feisty one and it will take 4 attacks that do more than 10 points of damage to kill her (plus all that other damage she may take that doesn’t meet the threshold adding up.) She will take wing after she’s been hit for >10 damage twice, and use Breath weapon once on AOE with most targets. While airborne, she will swoop low attempt to snatch up whoever hit her hardest this round, once she has taken a third hit >10points, she will land and ask for parley, but use the distraction to cast a sleep or charm spell. She will retreat to nurse a grudge against the party in d4 rounds, unless she is killed by a fourth hit >10HP first. 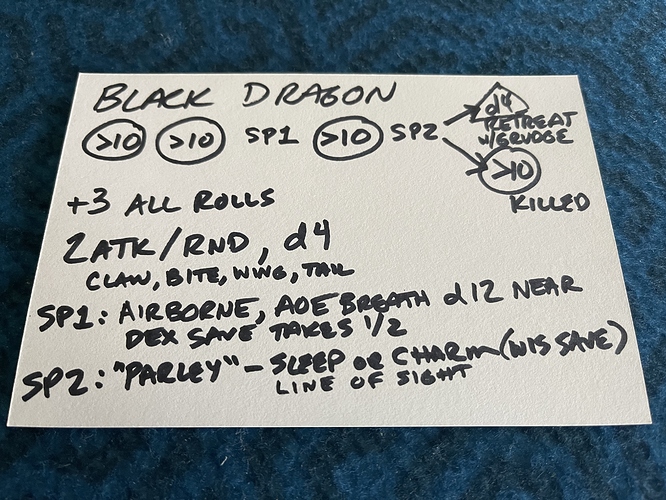 62F79F34-939C-429F-97DF-D5EC5E8EDEEB.jpeg4032x3024 3.73 MB
ONE VERY IMPORTANT CAVEAT ABOUT USING QUANTUM HP:
If a character hits a monster for 4 HP, but the monster/enemy has a “quantum” HP minimum of 5 or 10, this doesn’t necessarily mean the attack “bounces off, ineffectual” unless narratively that makes sense. The attack generally should still hit and you can narrate some blood spatter or what have you… It’s just that even you as GM don’t know how many HP this bastard’s got! and won’t know till it’s dead! Which can make for some pretty exciting battles.
Alex 2022-01-10 17:46:36 UTC #8

I’m not gonna disagree with Kane, but sometimes I find 1 HP instant kill mooks to be a bit anti-climactic. In those instances, I tend to use 5 HP mooks. That way, they can be one-shotted with an awesome attack, but if the player rolls low (1 to 4 damage), then the monster stays up, which keeps a little bit of a feel of some challenge. ie, the player rolls 3 damage, then the goblin takes the arrow in the shoulder, screams out in pain, and narrows its little eyes at the player.

Now that you mention it, I do share that opinion. I guess for me, 1 HP instant kills play really well into swarms and spawns. If those goblins just keep coming then I’m absolutely going to keep them to just 1 Hit because the pressure is coming from the number of enemies and not their hearts.

But if there is a set amount, going with 5 HP is clever. I like it!

Yessir. Different tools for different scenarios I think. In the case of a swarm of chub-chubs, say 20+ or so in play, 1 HP kills is the way to go.

Focussing back on monsters/foes. I probably won’t change it much from here. At least until I get back to the table as a GM. I am working on a companion worksheet for rooms/maps but might be a while.