Join our next campaign: MUD, DEATH, AND TURNIPS 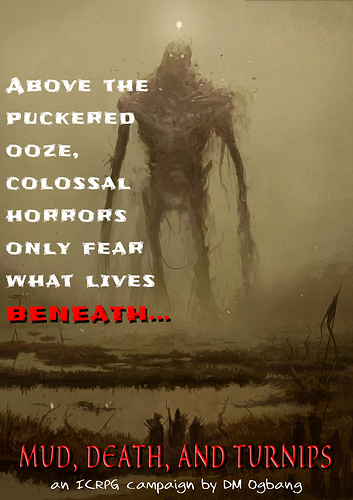 We are looking for more players to partake in my unique ICRPG Campaign: “Mud, Death, and Turnips”. The game uses ICRPG lore and mechanics, and is heavily inspired by the themes and mood from the bleak world of Turnip28 by Max FitzGerald. Please feel free to ask questions about this campaign I may not have covered in the description below!

INFORMATION
Must Have Tabletop Simulator to Play
Duration 3-4 hours
Experience Required: None, all are welcome!
Age 18+

A thousand years ago a great battle occurred in the Human Kingdom of Sesternia. The allied races of Humans, Elves, and Goblins from all across the continent of Alfhiem, banded together in a final desperate attempt to repel the colossal Dracolich Durathrax and her vast undead horde.

The Human Warrior King Henryk was locked in a final fierce combat with Durathrax and managed to drive his mithril spear into the black heart of the beast but not before being raked apart by her wicked talons. With the enemy finally defeated and the King slain, a great power void was created.
Endless civil strife ensued keeping Sesternia from recovering, its technology stagnating, and once beautiful countryside’s have been ground to a thick ruin under the endless marching boots of thousands of soldiers constantly waring to seize control of the country for their greedy Vassals.

Centuries later, nothing grows except a bizarre and horrible root that smothers the land, which some ancient historians claim to have originated from the ancient grave site of Durathrax. The root strangles the life from the trees, poisons the water, and fills the sky with an acrid mist. Humanity barely endures by harvesting this disgusting tuber. Consuming it has twisted their bodies and minds.

The other realms outside of Sesternia’s blighted borders slowly recovered after the defeat of the Dracolich and most are still too frightened to journey into into the thick muddy wasteland filled with giant shambling horrors and murderous root-worshiping maniacs. But the whispers of great wealth and power to be found within the land of Cyst, as it is now called, and the myth to restore the bleak land to its former glory, are all too alluring for a brave or foolish few…