ICRPG: Vigilante City is out!

So, long story short, Hank wrote and illustrated a SUPERHEROES setting with ICRPG rules. It’s loosely based on the recently released “Vigilante City” book by Bloat Games, but is mostly a ground-up revamp.

I played in a beta run and then ran one session with this book. It’s truly something special. I can’t recommend enough that you check out this supplement. This book is available for free to the top-level Patrons over at the Runehammer Patreon, and available for an absurdly low price over at drivethru. Here’s the link: 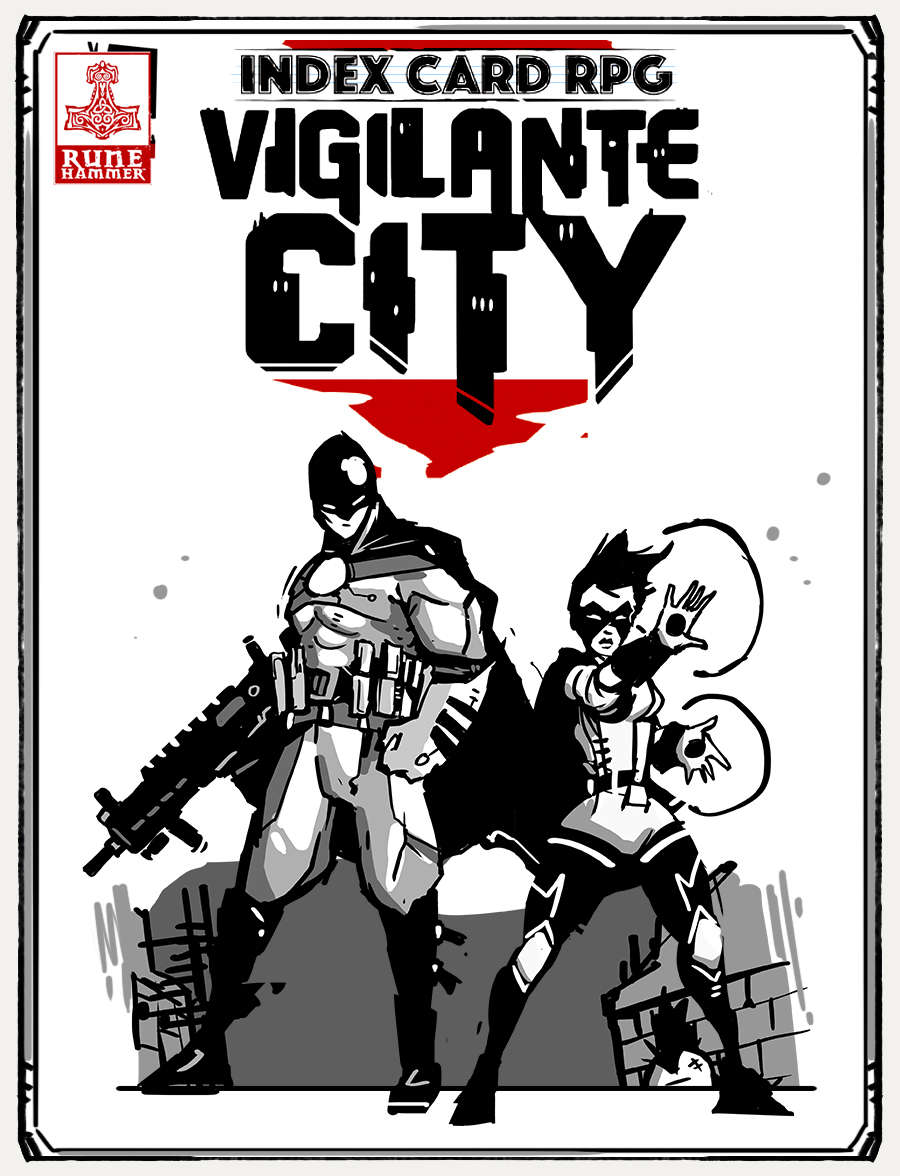 Super human powers, incredible villains, and a city on the brink of all out war come to Index Card RPG!  Thanks to

On a personal note, I would have cranked out a review video for this already, but I’m in transition and don’t have the opportunity yet. Hopefully by the time I’ve gotten around to doing the video, you will have already just bought the darn thing and run it already!

ICRPG: VC is, in every sense of the word, a true masterclass in how to create usable, rich and quick to digest content so that you can spend less time reading and more time gaming. In true form to all of RUNEHAMMER’s content, information is thoughtfully presented so that each concept only takes up a single page, allowing quick reference both in prep-time and at the table. The language and art used betrays RUNEHAMMER’s love of RPGs and deep knowledge of the Genre.

Just reading through the selection of included villains will drive you giddy with their unique approaches to villainy, each one offering your players a puzzle to solve and a refreshing challenge to GM. Each one has inspirational writing and unique powers that will allow the villain to almost play themselves. The highlights for me are an immortal who cannot die, only be captured, and a hacker who will avoid direct confrontation, instead weaving your heroes through the city with her network of tricks and lies.

The incredibly flexible POWERS system is a triumph, allowing for both cinematic one-shots or deep character progression in a longer campaign, and the guide includes advice and guidance on how to run each type of game.

How to use ICRPG Vigilante City is designed to be used with the ICRPG system. The rules you need can be found in either the Free Quickstart or the CORE edition. However the DIY lifeblood that drives all of RUNEHAMMERS games implies that the contents in this guide can be used with any system. Whilst the Art and theme are shared along with Survive This! Vigilante City system the ICRPG is set after the events of the ST edition, and the systems are independent of each other.

I am so digging what I’ve read. The idea of BLOCK CRAWL makes me so flippin giddy!

I’m kinda feeling the urge to hunt down a suitable burst/cone template for the inevitable mass destruction that will be rained down upon my table!

If only there was one already dolled up with ICRPG style runes that could double as a FAR banana… Anybody made such an animal already and wanna share a link?

I found a error in the book. Pg. 38 God’s hand has no Hearts. So you do not know how much health she has.

That is because she is immortal and cannot be harmed. The puzzle for the players is how to banish or capture her.

I had just bought everything I was missing from Hank’s collection two days ago (from DriveThru). Buying this now!

So would you say you need the original VC to fully use this?

YES YES YES! So excited for this!

Nope. The setting and mechanics are all contained in this book

Awesome, been waiting for this.

Mind blown, that is cool or tough as Sh** to do I bet.

I don’t quite understand the “Torment” feature for the Mutant. Can someone esplain?

I think you mean the Creature…and I do not understand it either. Can anyone explain it to us?

TORMENT: Being a CREATURE can be painful, but you can use that pain. Spend SP up to -10, making a CON roll with each point below 0. IF you fail the roll, fall STUNNED. IF you make it, continue to fight!

Here’s how I interpret that—

So the default is: Stun Points power abilities, and they are lost alongside other incoming attacks. If a character drops to 0 Stun, they take a knee, effectively—err, Stunned and unable to act or move or use powers until they Recover.

But a Creature with Tormented can go below 0 Stun, all the way down to -10 Stun. Spending Stun to fuel powers and also when they take damage. BUT… for every Stun Point they fall below 0, they must pass a CON check or they become Stunned like anyone else already would be.

Example: Swamp Thing and some non-Creature are both at 0 Stun. The non creature is Stunned till he recovers some Stun Points. Not so ol’ Swampy. He can still move, Act and use powers. So he uses a power that costs 3 Stun Points (even though he’s in great Torment!). After using the power, he must pass 3 CON checks or become Stunned. He does, and can fight on. BUT THEN—he gets hit by something or other and takes a point of Stun along with the regular damage. He makes a CON roll for that point he just dropped below zero. If he passes, he fights on; if not, he falls Stunned. He can continue this process until he hits -10 Stun or fails a CON roll, at which point, you guessed it: He falls Stunned and must recover.

Now what may be a grey area here is: if he recovers to -8 Stun, can he A) return to rolling CON and fighting on? Or B) is he going to remain Stunned till he gets back to positive 1 point of Stun? I’m thinking I’ll probably go with (A) in my games because that sounds dramatic and Tormented AF.

I like (A) as well. Thanks for the explanation–a very good explanation, BTW.

I’m confused about something. I just finished GMing Blood and Snow with my kids and now they want to play Vigilante City.
It says on page 13 to use ICRPG Core for character creation. Does that mean that they use Core classes and bioforms?
Thanks and sorry about the bump.

Under ‘Be Amazed?’ It just means you assign points to the same stat break out as in core except you get 10 points instead of 6. It says to make all your selections from Vigilante City. Not sure which version of the PDF I have – it may be one of the betas – but that’s how mine reads.

‘Heroes’ would be your bio-form which start on page 20. Page 10 has your gear.

That helps. Thank you.