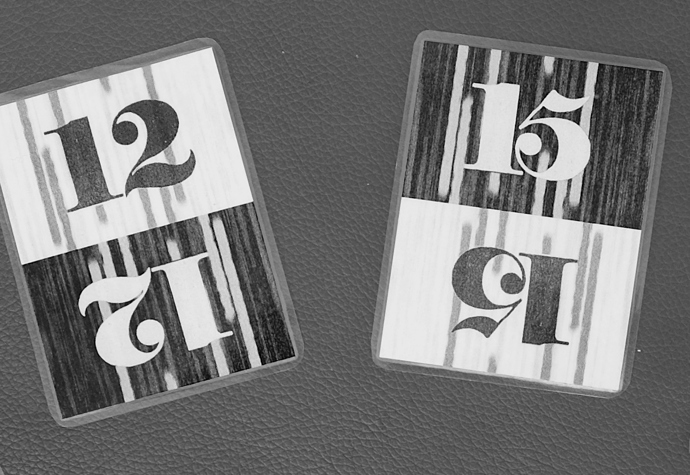 My first design for ICRPG. I’ll be running a one-shot in a film-noir inspired setting and I made these target cards for it. I don’t really know whom to credit for the font because it is taken from an old book cover “Travailleur & Cie” about Hendrik Nicolaas Werkman. Werkman was a printer and typograph, so maybe the numbers are his work, or maybe he used an existing “Plakat Antiqua”-like font. The rest is a simple Gimp-job by myself, meant to be printed at 178 ppi (7 pixels/mm), sorry about the low resolution. 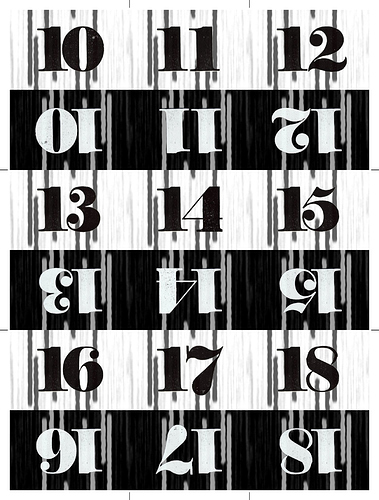 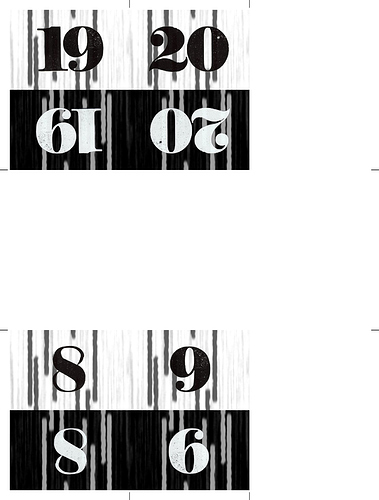 Those look so good! Would love to hear more about the setting!

Oh SICK! Those cards are ridiculously cool! Thank you so much for sharing those!!!

@GoblinJunkyard, you’re welcome: The gist of the setting is “private eye film noir meets the Black Lodge”. From the players’ point of view it is realistic 1950s America until the supernatural creeps in, beyond the players’ control. The supernatural is meant to be not quite as antagonistic as in Twin Peaks but utterly terrifying in its incomprehensibility.

Some more keywords on the setting / premise:
New York, 1950s. A tough ex-cop private eye and a brilliant and gorgeous academic find themselves as the unlikely duo hired to investigate the apparent suicide of a well-to-do Boston professor. The client is none other than the late professor himself via his last will. Increasingly paranoid in his last days, the professor decreed that these two individuals, whom he deemed “incorruptible”, should investigate in case anything untoward should happen to him, because he does not trust official forces to get to the bottom of whatever is the matter.

The professor had researched parapsychic phenomena. It seems that after countless fruitless avenues of approach he had indeed found something. The supernatural will be very abstract and quite an open homage to the mentioned Black Lodge of Twin Peaks.

I feel quite confident about the setting and can’t wait to run games in it. HOWEVER, I’m somewhat apprehensive about the planned one-shot because it is mostly a murder mystery. I saw that Hankerin is quite strongly opposed to running mysteries in TTRPG and I totally get why. In fact, the more I think about running this, the better I understand it. On the other hand, I know that my two players will be cooperative and won’t have huge expectations about player agency or be very meta-critical.

If anybody has experience about running murder mysteries, I’d love to hear about it. I’ve seen a video by Professor Dungeonmaster about it. He’s not quite as opposed to it as Hankerin but he also pointed out the challenges.