Sorry for the short notice. This will be a one shot using a combination of ICRPG 2e Core Sanity rules, ICRPG Worlds Ghost Mountain firearm rules, Black Light panic rules, an stress mechanic borrowed from the new Aliens RPG.

Basically think of the world of Sleepy Hollow or the A Touch of Evil board game. The set up is very Sleepy Hollow, players will be sent to investigate reports of monsters threatening a piece of property on the edge of the frontier. The game will be loosely set after the French and Indian War (the Seven Years War) but before the American Revolution.!

This sounds pretty darn cool. Wish I could join you but I’ve got an IRL game happening. Looking forward to the play report.

I will probably run it again, I have one player from another site and to be honest if I don’t get anymore I’ll run him through a different adventure using these rules.

Players will be charged with investigating an unusual threat to a frontier fort.

Awesome, I’d love to have you join us. If it doesn’t work we can always schedule another session down the road.

Totally should have read this…saw I couldn’t make it and skipped on through.

I’m way too familiar with this time period. Well I had been obsessed for a while with it. Never played an RPG game in this era.

The 7 year war could have been called The first world war.

I’m way too familiar with this time period. Well I had been obsessed for a while with it.

Don’t worry I’ll run this again. Maybe we can figure out a good time for you two over on the discord and I’ll post a game for that date / time as well.

I got obsessed with weird cats like Samuel Whittemore 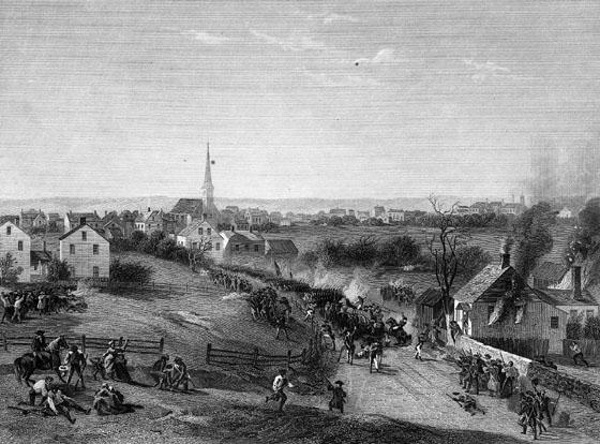 On April 18, 1775, British soldiers left Samuel Whittemore in a pool of blood alongside a stone wall in Menotomy, Mass. As they retreated from the Battles of Lexington and Concord, they had shot the old farmer in the face. Then they bayoneted him at...

I’m enchanted by revolutionaries. It’s difficult to know if there was a more successful group of revolutionary’s historically.

You’ve seen some of my ink… straight French-Indian war stuff. My family arrived in the US at the start of the frontier era and took to the wilds to stake their claim in a new continent. It’s an amazing era with an amazing breed of people.

We have no point of relation to the toughness those people had. And religious fervor for self determination.

But I went through my Che phase and a few others…but I always knew Che was a monster. And I knew where he grew up. I spent my teens in the same places he did.

Sunday morning 7am is not impossible for me…just not optimal. Roll20/discord???

I’m hoping to have my Zoom account set up. Usually I do theater of the mind where you can roll your own dice at home and I just put up images to set the tone, I could probably run it fully on Zoom for a game like that.

That said I’ll use Roll20 for this one as we’ll have some tactical battle maps.

Paxx it is totally up to you, I planned this one to be European friendly time wise and am planning further games that will work better for the Americas. You are welcome to get up early and join this or catch the next one, I think we are slowly working on narrowing down a date and time over at the Black Light RPG discord. Once that’s decided I’ll post another announcement for that session.

You guys are talking about the tenacity and toughness of the people back then read up on George Rogers Clark and his victories on the Northwest Frontier during the Revolution. An amazing campaign.

New person for me. I’m very focused on my knowledge of the US Revolution. Primarily April 19th 1775. And it’s players.
Massachusetts Bay Common Wealth dragged the other colonies into the war. All mostly willing but with a lot of conditions.

Sam Adams sadly was largely forgotten cause he never wrote a memoir until the beer, and that had a picture of Paul Reviere until recently. He and Ben Franklin. Are probably the founding grand fathers of the US. Though it’s probably not what they would have wanted.

The Revolution was won in the hearts and minds before the first Powder Alarms. Of cities in that time, Boston was the second most literate in the world.
The rugged individualism required to do that…against the strongest superpower of the time. And have an 8 year civil war over it. Has never been replicated.

I just think we celebrate the wrong people.

Side note…I’m 60/40 on crappy range/accuracy with a smooth bore. While not a Kentucky Rifle, of ball and bore are matched…they are accurate but take longer to load…but I’m getting into the weeds.

Also, please recognize the pike also known as the Brown Bess with bayonet affixed as the deadliest and most versatile weapon on the board. While more people died of famine and illness…that combination was where most casualties came from. Strong wood and a good bayonet was more versatile than a sword.

While Kentucky Rifles (made in Pennsylvania) where the peek of Colonial technological achievements in killing machines, they where delicate, took longer to load, and had a high cost. Towns could afford to arm everyone with a Brown Bess for the most part. The AK-47 of its time. And the 30 by 3cm wide triangular blade, it’s true nasty end.

I think there is room to learn and respect both types of heroes but you make some great points.

I considered making the long rifle, which would include things like the German Jaeger, longer to load but I think that would probably be getting into a level of detail beyond the scope of this game. For example, and I’m working off memories from a decade ago, some skirmish miniature wargames require the figure to take two turns to reload a musket and three to reload a rifle. In those games that makes sense but in ICRPG terms I don’t think the difference is equivalent to another heart’s effort and to be honest in the long run games like Black Light and Colonial Gothic aren’t decided by these kind of factors. Ultimately I didn’t want to get too bogged down in detail but because of the lore that has arisen over it’s use (on both sides, consider the Ferguson rifle) I felt a need to address rifles v smoothbores.

I have a couple other thoughts but it’s a busy morning and I’ll check back in this afternoon.

Sorry, got into the weeds…I think the rule concepts as written are fine. Just the superiority of firearms to bayonet was not yet apparent.
In giving them equal damage, that is accomplished. Effort for loading is ingenious. A tool D6 effort for a Brown Bess and a manual effort for a Kentucky rifle or any device designed for accuracy would justify the difference.

In giving the Kentucky rifle better range, but it has questionable viability after being battered or used as a club or pike. Would be more than enough and not sure the need (says the player who used an M4 as a club in Mark’s operation Orange game)
While the general musket Brown Bess was able to take a beating and still function as intended…hence larger bores than their balls that lead to inherit inaccuracies. It’s inaccuracies where actually a design feature not a flaw…

I agree that it is easy to underestimate the effectiveness of the bayonet in this time period. As for the long rifles being more fragile you’ll get no arguments from me. Michael Mann’s Last of the Mohicans captured some beautiful scenery and had a great score but I agree the long rifles I’ve handled and shot would not stand up to the abuse they are given in that film.

Edit to add that yes, there is no doubt the smoothbore is much better suited to extended firing without at least swabbing the bore as compared to the rifle but again I think we are getting into details that probably aren’t needed for this type of game. I have a ton of respect for the Brown Bess, in fact I’m not really sure why I have never gotten around to picking one up, and there is a reason it stayed in service for over a century.