So figured probably other people do too.

With that in mind, I decided to try to keep track of how I put together the December issue of our Vigilante City Game. I can’t say I’ve ever prepped the same way twice, but there are definitely themes to how I do it that have matured over the past few years.

Anywho, [offers grubby handful of link] I maded my shieldbros some slides…

Supers at the Zoo in Winter

Ooh very interesting Lon. When I get home from work I’m going to sit down and process all this.

As for me, I’m prepping for a session on Monday, so I’ll try to document what I do although in a nutshell I utilize @Ezzerharden’s Game Master Worksheets that I’ve expanded with a series of custom sheets. They kind of walk me through the process and provide a packet of details I can refer to during the session and then stash away in my archive of adventures.

Interesting to see your process. Thanks for sharing.

Thanks. It’s always changing, but I can see a big trend since I started GMing ICRPG towards less and less on the page, even for big setpiece encounters. (This says more about how much more of an overpreparer I was, than about how good of a minimal prepper I am now, LOL)

I still want to get by with even less, though. One Game at a Time.

Okay so here’s my general GM Process (sorry for the long-ish post).

Like I mentioned earlier, I have a series of sheets that I print out and form into an adventure packet that I can use to plan a session, reference during the session, and then store in my adventure archive. The majority of these come from Ezzerharden but I’ve been slowly adding additional sheets to fill my needs. 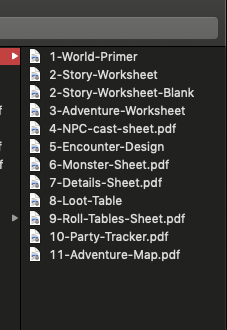 Since the session I’m currently planning for is the third session in my group’s particular adventure, I skip straight to the Adventure worksheet and start printing out what I need.

1 Adventure Worksheet to jot down the overall L.O.G of the session
1 NPC Cast Sheet to list out NPCs involved and any tags
3-4 Encounter Sheets to match the adventure
3-4 Monster sheets
1 Detail Sheet to fill in for investigation checks
1 Loot Table to list out adventure appropriate LOOT
1 Roll Table sheet to cover any random events or circumstances
1-2 Party Tracker sheets so I can reference the players general stats
1 Adventure Map with all the Adventures Moments assigned to their specific areas/encounters

If you’re keeping track that’s about 13-15 pages, but before you run me out of town for the amount of prep that sounds like, it’s really not. I’m just terribly afraid of blank pieces of paper and so these sheets help me focus in my thoughts and jot down snippets of information I need.

Here are a few examples of the ones I’ve made: 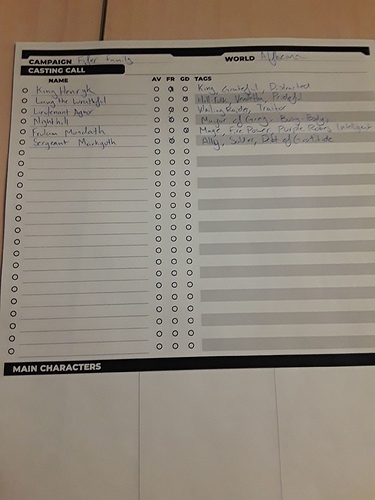 Monster Sheet - Kobold
If I’m feeling really on top of it, I’ll find an image of a kobold and place it into my Affinity Designer file of this sheet and then print it out with a picture. That or I’ll attempt to draw it or leave it as a place to take notes. 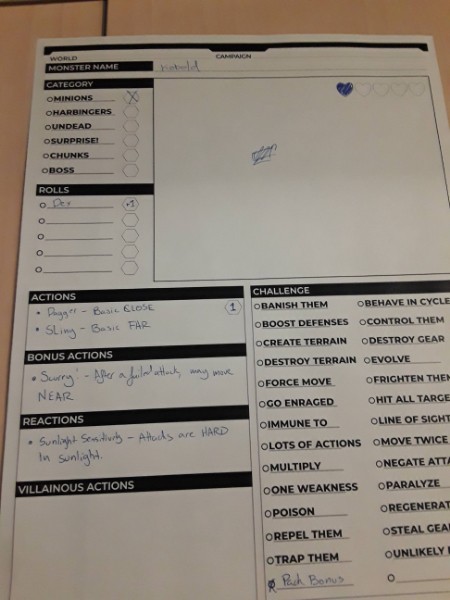 Adventure Map
If I don’t draw the map itself, I’ll usually place a map onto the file and print it out so then I can reference each place however I want, including what my baseline is for the Target. 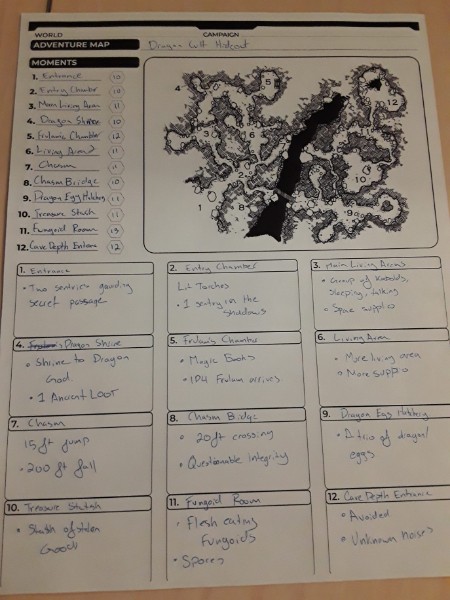 The last thing that I’ll do before the session is I’ll review my adventure pack and then create custom minis for all the enemies using the print-n-play templates. Then when the session is over, I’ll slip all the sheets and all the minis into a folder and store it away. If I ever need a quick adventure or I run off to do a one shot, I’ll just pull out a folder and have everything I need to run a night of questing

Hail! My process is probably quite different from other DMs on this forum. I think that’s largely due to my running “old school” games. I use random encounter tables, weather generation tables, random wilderness sight tables, cycling job boards for bounties, missing persons, etc., and, finally (this is my secret weapon as a DM, tbh), large scale random event tables. So my general process goes like this:

The big thing for me is NOT having a pre-written story for them to experience. I prefer to design “living” sandboxes that evolve and surprise me, too!

Example: In my last Keep on the Borderlands game, I generated a huge amount of bandits and decided to split them into two groups (The Raven’s Oath bandits and the Iron Claw bandits). I put them into hexes I4 and I6 (because those are dense hills which provide cover and isolation from law keepers, as well as natural resources). I then designed their leaders, reputation, tactics, etc. and created a Timer - War (3/6 weeks). After 3 weeks, the timer completes and the bandits go to war! I roll some dice and see how that conflict resolves, how long it takes, what casualties each side suffers, and how nearby creatures, towns, etc. react to it. Can the Raven’s Oath bandits continue without their leader, who died in battle? Will they be forced into slavery? Join the Iron Claws? Then I adjust. I keep track of all these things in a Campaign Status Document. This is basically just your standard Patch Notes for a video game, that logs every change from the campaign’s default state.

In any given session, I’m rolling Random Encounters, adjusting the weather, and generating sights (and SITES) in the wilderness. Those rolls change the game. Why have I rolled Bandits the last seven times? Well, I guess there is a new group of brigands in the region. Why? From where? Who leads them? I figure all that stuff out after the session. Why did I roll a pack of 8 ghouls in the middle of the road? Must be a crypt nearby in the woods, or an errant necromancer who just killed a supply caravan. I guess I should make the necromancer and their goals, figure out who the caravan was, and how the military fortification they were delivering to will react when they don’t get the food they need for winter - and so on.

I hope this helps! People look down on the Random Tables of the past because they “don’t fit the story”. That is, in my opinion, a mistake. Random Encounter Tables aren’t supposed to fit the story. They’re supposed to help you generate new stories that appear as if they were planned all along. And of course, if the rolls don’t fit, ignore them. They’re tools, not shackles. Game on!

Neat! Thanks for sharing. I had seen those sheets before but they fell off my radar. For the life of me though, I can’t figure out what AV FR GD are supposed to mean for the NPCs?

I find that one of the biggest things that pushes me to more prep is the desire to have appropriate art on hand for locations and monsters. How this translates over and over into so much more than that is kind of a great big mystery! Lol

Sounds fun! And I can see how what you do (creating a living world feeling by having some independent world events on timers and resolved by rolls) can feel very satisfying.

Something I’m realizing as I read here is I think sometimes it simply comes down to how enjoyable (or perhaps how comfortable the GM is with connecting things together on the fly (whether that is Prep or results from rolls).

@Lon, thanks! It’s been fun making the sheets because I know there are a lot of tools and ways to go about it so I can always mix and match new techniques and styles. As for the AV FR GD on the NPC sheet I use those as just a quick indicator of Average, Fair, or Good. An average NPC may just be a name that I’m expecting to be mentioned in passing. Not much back story and not really relevant to the whole story. Good tells me that this is a more major NPC for the adventure. They’ll have a back story, may have some abilities, and they’ll play a larger role of interacting with the players.

At the time of creation I was trying to figure out some way of differentiating the three levels with only two letters and I settled on AV FR GD because they were distinctly different at a glance and could be flexible in meaning.

@Anthony_C, I think your process is fascinating as well. I’ve never really explored random encounter tables because my main tabletop experience has been in the form of homebrew systems, castle falkenstein, and ICRPG. All of which haven’t utilized the random tables heavily.

But your process does pique my interest. I’ll have to look into them more. Do you have a recommendation on what you’d consider the “foundational” random roll tables?

Sorry for the delay, college started back up! Random encounters, random large scale events (monster hordes, bandit brigades, hurricanes, famine, disease, bountiful crops, excellent weather, the death of the king, etc.), random sights and locations. Those are my mainstays. The key, really, is to interpret them and make in-fiction causes and reasons for them!