I started them on Lego Heroica with all of us playing together. (Lego microfigures on a board: roll to move, roll to attack.)

Then, I introduced them to the idea of me being the GM & controlling the bad guys. When the movement became too restrictive on the Lego maps, I moved us to hex maps! 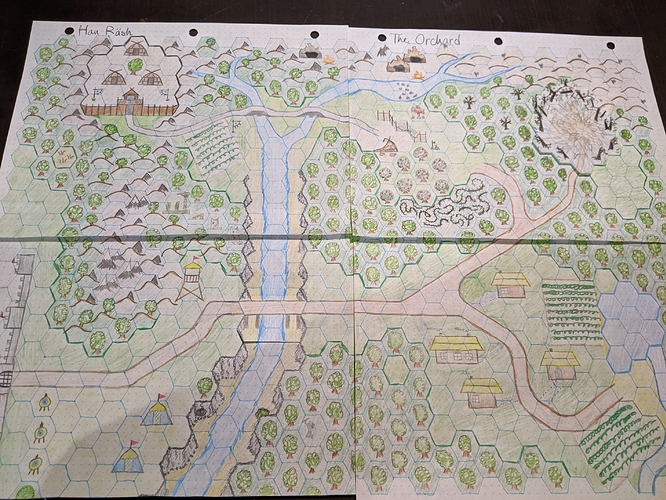 How do I transition my players from hex based, roll to move, to ICRPG’s Close Near Far system? Thanks! 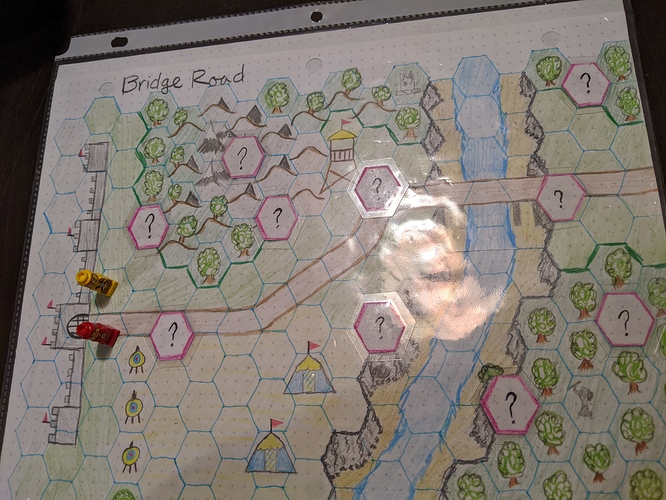 What you are doing is awesome!!! As to transitioning…I haven’t played a mini hex crawl…but I’m sure some here will have advice!

Buy a bunch of bananas, then let them choose ONE banana. Then use the banana to measure distances:

“Wait… is that unit you are trying to attack a banana away from your character!? measures with banana Yes it is! You can move right next to it and attack.”

Remember to also buy peanut butter so you can have a banana+PB snack at one point. And then find a new banana!

Man, this battlemap is awesome, now I’m wondering what the story is behind this!

And what is Lego Heroica? Is it an RPG system?

It looks like a dungeon crawling boardgame. I would get it just for the “assets” tbh haha 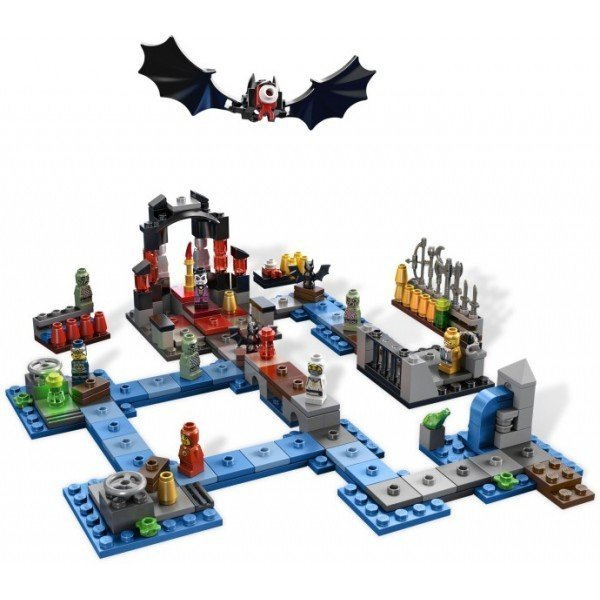 Or a carrot, or an apple, or a brownie… a pencil, or a cup. Find something that fits your scale.

If 6 hexes was max move…work backward from that, your hex and hexes next to you, 3 hexes, and six hexes is far.
Or take this advice from way back in 2019

[image] Today I just got struck with the drawin bug and felt like doodling a diagram on how I tend to calculate my distances while running a gridless game. It’s super easy to use, especially when you’re all out of bananas. I hope y’all enjoy this and maybe find it useful. I like to use phrases like “thumbs up”, “rock on”, and “hang loose” as distance markers. My players understand immediately and throw the proper hand gesture to range find. In our gaming vernacular it’s as common as using EASY…

Click on the image or the link…it really is genius!!!
All praise to @TheWunderLich

Exactly. It’s out of production now, but the assets are excellent!

If 6 hexes was max move…work backward from that, your hex and hexes next to you, 3 hexes, and six hexes is far.

Ah! Of course! That makes so much sense! Thanks @Paxx!

Man, this battlemap is awesome, now I’m wondering what the story is behind this!

We’ll… Since you asked! 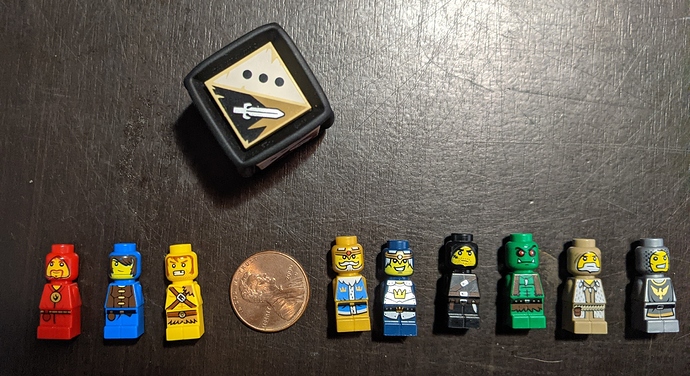 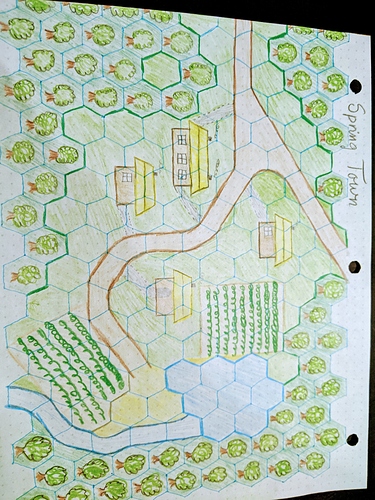 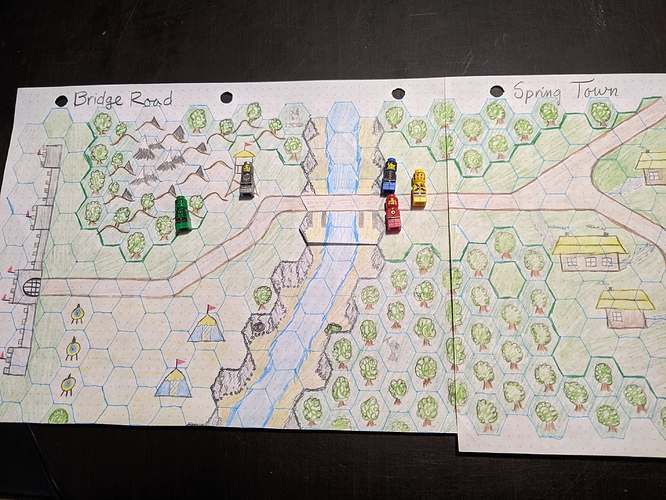 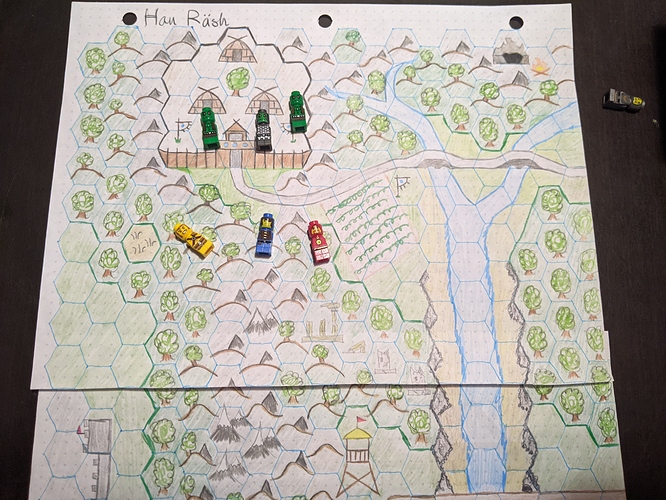 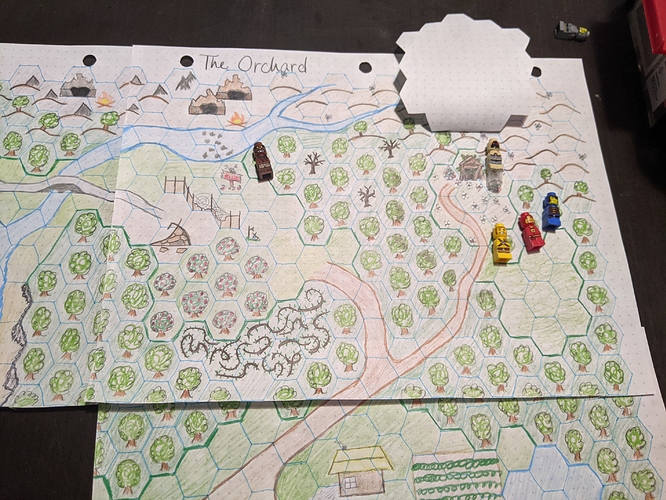 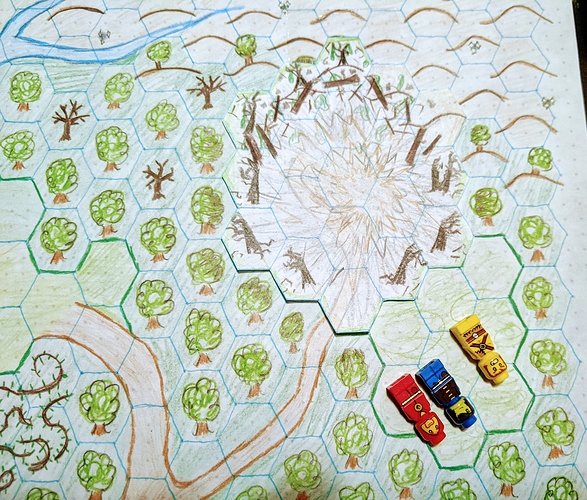 Players woke up on the meadow with one hp!

And that’s just in the first 4 locations! This post has gotten long, but I’ll show more if you’re interested.

Honestly, at their age group i would play it loose. Just declare their situations as they arise- the monster is near to you, far for the other characters and such. Ease them into the rules, the less “hard and fast” the rules are the better for young ones.

BTW… what you are doing is awesome. My daughter is about to go off to college but i remember the days of playing stuff/games on the floor with her. She remembers all of that and always will. … and so will your kids and you.

If i made any typos with this post it is because you made me tear up… dang it.

Unless you just have a ton of hex paper, I would ditch the hex paper and switch to 1” squares. Why? Well, I was just looking at your road there. Traveling west to east in a straight line along the road requires an odd up, down, up down, as the hexes don’t align quite like squares on a game board. So, for young minds, I would have the visual element be a bit more intuitive with a clear grid and clear x and y axes. So, if you move up, for example, you can clearly count y squares up.

Second, define your scale. For example: A “near” move is “four squares.” A “far” move is double that, or “eight squares.” Close is touching. Then, just reinforce the terminology every time you play. “You can make a near move, which is four squares.” “How many squares can I go, daddy?” “You can move four squares (a near move) and still take an action.” Eventually, as they grow older, they will associate the concrete number of squares with the abstract term.

But truthfully, I wouldn’t worry about it too much. At that age, it’s just great to have them moving, RP’ing, taking actions, and participating in making a story. Fun really should be the name of the game versus too much of an emphasis on abstract terms like close, near, and far.

But truthfully, I wouldn’t worry about it too much. At that age, it’s just great to have them moving, RP’ing, taking actions, and participating in making a story. Fun really should be the name of the game versus too much of an emphasis on abstract terms like close, near, and far.

Oh! I forgot to include some context in my original post: the ‘roll to move’ mechanic is a leftover from the Lego boards & often leads to frustration as the kids can feel left behind if they roll low. The fun factor is the major motivation in wanting to move towards ICRPG’S movement rules. 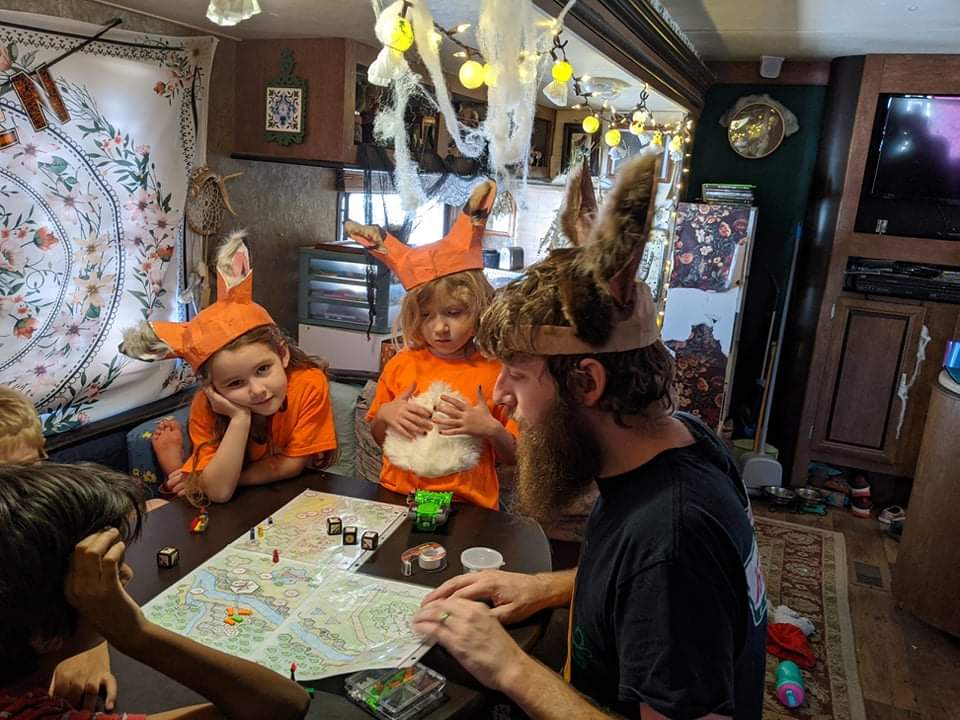 Here’s another picture, this is us playing a Halloween adventure.

Yeah. I would definitely remove roll to move and make it a set amount, or base it on their characters a la 5e style.

I need to somehow give that photo more than one heart!!!

jfc I just melted from wholesomeinitis

#Way too much cuteness for me to survive!!!

If I survive, it’s cause the gods have proven beneficent in my idiocy.

To add onto what @Alex said I use squares with my students for the same reason. It keeps things more straight forward for them. They get two actions a turn, movement is up to 3 squares per action used. Targeting goes; close is adjacent squares, near is 2-3 squares, Far 4-6 and beyond they need some skill to shoot. On top of this if you were to move to “square” you could use a large lego mat and use the studs for “squares” especially since you have the tiny lego figures: so an archer could target something up to 6 studs away. This also helps me make weapons and stuff on the fly- Spear can stab Close (str) and be thrown Near (dex), Long bow can target past Far for a Hard check, something a regular bow can’t do.

Maybe I’ll use squares when I zoom in and do the interior of some buildings. How do you handle diagonal movement? Like, moving 3 diagonally is much further than 3 orthogonaly.