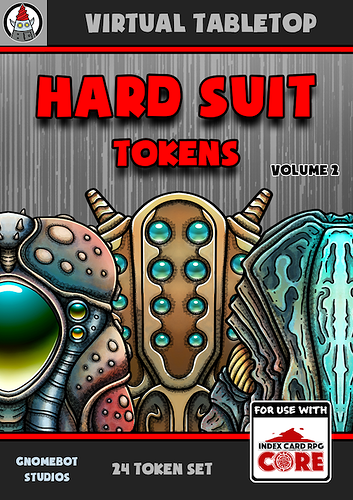 It’s me again, doing what I do…fervently working on token sets. This is volume 2 for Hard Suit and probably my favorite between the two sets. I have enough sketched out for another set but I may take a break and work on a set of room targets for Hard Suit and/or some more Warpshell stuff. Keep it real and keep the dice rollin! Greetings!This is my second set of tokens to broaden the options for your online games. This set conatins 24 high qualit

Another great idea and purchase from DTRPG! … Nice work… Game On!!!

Thank you so much, I really appreciate the support! Happy gaming!

Thank you! It’s been good to focus on some ICRPG specific stuff.

Hey thanks! I enjoyed putting these together!

I got to play in my first game of Hard Suit this week, excited to see how it unfolds!

Hard Suit came out when quicker than I was expecting. I thought Hank said we was expecting to publish it around November. Have you been following the YT series?

I watched the first two and that really had me interested in pursuing the game when it came out. I really want to watch the rest but I feel I need to play the game for a while first. Because I am a player, I feel it is important to know as little as possible the first time through. So far the experience has been really cool! I really dig the concept of how the characters are built and the world/tech, it is inspiring to me.

Yeah, I watched most of the episodes. My biggest takeaway was in the early episodes, starting the characters off with zero stats and no abilities and allowing those things to come organically. I thought that was such a genius way to handle character creation.
I also like the way the hard suits created a “mechanic” that allowed the characters to be more than–like handle situations beyond their abilities. I was thinking, the way hard suits is handled would be a cool way of using magic in a low magic world.

Bought your first set, looking forward to these as well!

Thank you so much! Enjoy the set and your adventures with Hard Suit!

I sure will! I’m looking forward to recording and sharing my campaign on my YouTube channel with everyone!

I look forward to seeing that, please post it up when that rolls out!