I and my group have started a HARD SUIT campaign and really love adventuring in ATRIA!

I have a few questions based on situations that have arisen concerning integration of HARD SUIT mechanics and ICRPG basic mechanics.

Several of the HARD SUIT parts grant bonuses to STATS, but those same STATS are described as using POWER ROLLS. Which is used to roll for these?

In combat, POWER rolls are made to attack, but the MONSTERS all use DYNAMIC rules. How do you settle if the monster is hit or not? Or do DYNAMIC rules only apply versus non HARD SUIT enemies?

Thanks for any input in advance~ 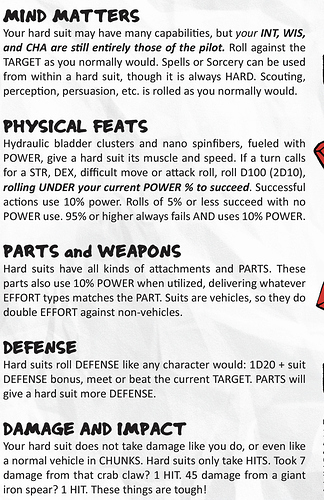 The Hard Suit parts only add to the DEF stat (anchor boots at to STR but that’ll be more of GM call on when to bring that up)
All Hard Suits have a base of 10 DEF, then add whatever bonuses your parts add.

Whether you’re trying to attack with a melee or use one of PARTS, you’ll always roll a Power roll in a Hard Suit. Rolling under generally means it’s a success and whatever effect your PART describes, happens. Like rolling against a monster AC but you just roll under your current power level to succeed on the hit.

Hope that helps. Let me know if I can clarify anything. I’m currently running a Hard Suit game and we just finished our 11th session

Using skill/stat checks, melee attacks with weapons, or difficult movement DO NOT use 10% if you fail the power roll

Thanks for the response!

What I’m questioning is how do the parts adding to Stats get applied or frames that state they make certain tasks like Stealth EASY? I’m thinking of examples like the ORGANIC Frame, and various Legs that add to stats (+3 STR bonus to hold on). Lastly, does your combat example mean that monsters do not have any Defense against Hard Suits? The Dynamic roll or Room DC only applies to being out if the Hard Suit?

as far as parts that give you stat bonuses to STR or make certain checks Easy, thatll be up to the Gm to decide to use those checks. In which case you will roll the stat and not the power level.

And yes some of the Parts/Weapons do auto hit if you roll under the Power level. Its like rolling to meet or beat a defense or room target number. Some attacks may still require a STR or DEX roll. It all just depends on the wording of the Part. Now that doesnt mean you cant give your enemies a DEX save to try and avoid the Missle Box attack.

Several of the HARD SUIT parts grant bonuses to STATS, but those same STATS are described as using POWER ROLLS. Which is used to roll for these?

I see parts that increase DEFENSE, which is a passive benefit. The only part on page 27 that increases a stat is Anchor Boots: “+3 STR when holding fast”. This would be a judgement call by the GM in the moment.

I think I would rule that POWER needs to be used to activate the boots initially, and once activated we could use contested STR rolls on following turns. If you fail the POWER roll, the STR bonus never kicks in.

but the MONSTERS all use DYNAMIC rules.

Monsters use dynamic rolls for their own attacks against the players only. A player attacking a monster would use the Target Number.

As written, the rules on page 8, excerpted above, indicate that an attack roll using a Hard Suit would require a POWER roll. You may deem it necessary to adjust this, on a situational basis if the narration doesn’t justify it. Maybe a really hard-to-hit foe needs a traditional “to hit” roll, and only after that succeeds a player might exert POWER to use a suit’s part as a consequence of the successful attack.

On the whole, though, I think it’s a fair system: a fully charged suit is powerful and can use all the built-in Height tech to aid in targeting to hit the foe. A suit with less charge may be slower, or re-routing power to other systems, making it harder to aim. Plus, the player needs to decide if they want to expend the limited power for a combat hit.