So I know this has been discussed a couple times in different posts but I wanted to get the thoughts in one place and see if anyone has come up with additional ideas since then.

Question: Best ways you’ve found to handle ammo consumption in ICRPG? No reloads, reload on low attempt, reload on low effort, reload on high effort, etc. High effort seems the most real because it represents firing more ammo and running out, but gameplay wise I’m not sure it’s my favorite. Any feedback would be great as I’m looking at a few different gun games and can’t decide which way to go. A couple driving ideas are realism vs fun factor.

A realistic approach could be the fun a group could want. I know I wouldn’t want to reload several rounds in a row from the roll of the dice, but I also get how people wouldn’t want to count ammo.
Personally, I like a semi-realistic take on it: count ammo in the gun and abstract ammo in reserve. Making that process as simple to handle as possible will make it painless, so I just draw up cards, put them in plastic sleeves, then use dry erase markers on the sleeve. 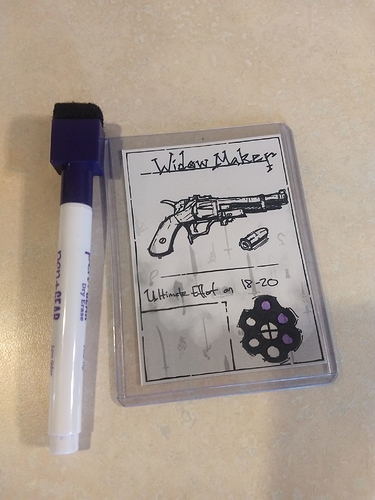 Here’s a quick card I just whipped up to show my personal implementation. Revolver has 6 shots, put the card in a sleeve and count them off as you lick shots down the dusty thoroughfare.

When deciding how to handle ammo counting and reloads, first consider the genre of the setting. If its a post-apocalyptic survival, modern zombie horror, or tactical military squad combat, then that implies that every shot is a scarce resource and you should track ammo. From the number of rounds in a clip to the magazines taking up limited inventory slots. Reloading should take a full turn (unless otherwise stated by LOOT or TAGS) to force a tough decision about whether to run for cover or charge into melee. Use physical props like glass beads or Nerf darts to keep their number of shots firmly in sight.
For high adventure, pulp action, or cinema inspired gun-fu then don’t count ammo and consider the characters always have weapons and ammo nearby and ready. The Altered State rule of making the gun useless on a roll Attempt of 1 works well to push the players to switch up their weapons and combat style.
My default for a mix between realism and fun is not to keep count of ammunition for small arms. For heavy weapons, I think you should limit ammunition. Man-portable rail guns, shoulder-worn rockets launchers, and tripod-mounted machine guns are heavy weapons that should do multiple dice of Magical/Ultimate Effort. You can justify counting their shots because of their higher lethality and sheer bulk.

@Chaologic thanks man! And that card is sweet!

@Ravaan that’s a good way to look at it. The main settings I want to run are modern times or very near post apoc, so I think tracking ammo or at least heavy ammo may be the way I go for those settings. Thanks!

Still open for more ideas. Anyone have a rolling method that they really prefer?