how do you handle D8 GUN effort in settings which do not provide guns at all (like classical fantasy)? I started using it as D8 Bow/Crossbow effort instead. But what about you?

I guess you could use it to differentiate weapons of war - spears, lances, halberd, great swords, and “civilian” weapons - daggers, staves, clubs, etc.

I import the Fray die from Godbound.
Fray Effort!

This is the one rule I hope he changes back to 2md edition in the mastery edition. I prefer less stats and feel like guns are just weapons.

Making the d6 Tools and the d8 Weapons I think is a good compromise, but then I think only a rogue class would put any points into tools.

ICRPG is amazing though, and I cannot wait for the mastery edition!

You could leave it for a dwarven culture found later in the game with actual firearms or alien metal.

I guess you could use it to differentiate weapons of war - spears, lances, halberd, great swords, and “civilian” weapons - daggers, staves, clubs, etc.

Most of the time I’m leaning for @The_Merlitron GUNS as “D&D 3rd ed. martial weapons” above. In the same vein, weapons with “simple” could be able to use TOOL effort if higher. For example the logger with an axe, a tailor with a scissor, hunter with a hunting bow and so on…

This is the one rule I hope he changes back to 2md edition in the mastery edition. I prefer less stats and feel like guns are just weapons.
Making the d6 Tools and the d8 Weapons I think is a good compromise, but then I think only a rogue class would put any points into tools.
Personally we stick to 2nd edition, d4 Basic, d6 Weapons, d8 Magic. It also makes ULTIMATE effort more of a reward sice it’s a bigger jump up in effort.

This is one of the issues I have the most with my players since the D8 Guns die was added and the one I find myself tweaking the most. I find the need to have separate stat from Tools and weapons.

It will break the 1 die for 1 thing only elegance of ICRPG, but… did anyone try making d4 BASIC d6 TOOLS d6 WEAPONS d8 MAGIC, before? Or increasing the die face for each number assgined? And if so, what was the feedback?

I think the reasoning behind the increase the dice each time is so you can roll a different variety of dice. I think the d10 was just used for loot tables in 2nd edition.

I did play a serenity RPG a while ago where you increased a die face for every point you put into a stat, I think the system was called Cortex. It’s an idea i wouldn’t mind toying around with for ICRPG. So a 0 in an effort would be d4 and a 3 would be a d10.

I think either of those hacks are good, and I’d take them over the d8 being guns.

The only caveats I have with them, is now fighters will have to specalize in a weapon type, which isnt that bad, but a Mage can just put all his points in Magic damage. Seems like an unbalance is there.

Like all Mages damage is consistent, but a fighter who switches weapons could lose a lot of damage potential. The other thing is figuring out the what weapons go in what bucket, which can be done for sure.

Overall though, I’m gonna hack what I don’t like anyway. It’s one of the beauties of this system. 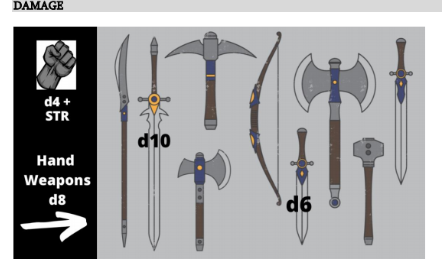 This was my Inspiration for the hack, but yeah I get where your coming from, did not think about mages

The small counter balance to Mages I have, Steel can disrupt the energy flow, so no medium or heavy armour.

Also they have the really mean spell backfire table

I think those are good ways to help balance it. I the mages have a bit more power and flexibility, but yeah making them easier to hit is a big counter balance. The spell backfire is a bonus

I also house rule that your staring HP is 10 + CON. So fighters tend to get a minor buff there too.

Didn’t think about applying it to socials and journeys, I just use Basic for that usually. It’s an interesting idea and something to think about and trying to think of other ways like that.

It’s sort of like breaking stuff that is more skill based into it’s own stat away from weapons.

in other words, Tools

In my version of ICRPG, I divide anything that deals damage into categories:

Then, all weapons can do variable damage based on the situation. A piercing weapon vs skeletons never deals more than D4 damage, typically only 1 point of damage. A mace, however, would deal D8 or critical damage against the skeletons. A dagger deployed from ambush at close range (thief, that’s you) does D8 or critical damage. A polearm deals D8, but if the creature manages to get past the deadly end of it, only D4. And so on.

Do I write those rules down? No. I adjudicate on the spot verbally to the players. This gives them a chance to counter me if I’m forgetting something, or to suggest something else.

Correct! But diversified. My idea was rather than having more combat options (multiple weapon dice) to have different tool dice for skills. The dice then are more like specific situations than say specific implements. The weapon die is more of a combat die. One may be good with tools, say fixing something broken, but not with hunting, therefore one needs tools for repairs and journey for hunting. That was the thinking!

Diversity without getting too complicated! I would probably not go that route as I see it splitting Effort up a bunch.

I also modified the attributes from the standard six to more of an Open Legends RPG style, where attributes and skills are a single thing, with Effort still being its own thing. So Engineering (I think I have Craft, not engineering, fwiw) or Hacking (probably more broadly Computers) would be the Attribute and the Effort would be Tool. Another example would be that Fight or Shoot or even say a combat use of a social skill may be the Attribute (a la FATE) but Combat would be the Effort. But this would be veering away from OP. My general thought was to grant more non-combat options to deemphasize combat.

I’ve been looking at ancient~ prefiérame weapons recently and their ability to place someone into debilitating shock. (Out of the fight). With a 3 second opening.

Staffs and spears/pikes are the most underrated weapons in fantasy. (Damage from a long leveraged fast moving object to the head or the body….)

Swords the most overrated. Large swords (great swords) are all metal pikes.

Slings and bows require years of training and bows in particular require strength.

I’d give d6 most of the time, d8 when it’s the right tool for the job. Not too important but it keeps d10 and d12 for special events/moments.

On the D6/D8 thing…lock picks for a lock is a d8. A spy glass for long distance observation d8, warhammer vs metal armored opponent D8……

Anyway I’m ok with this.