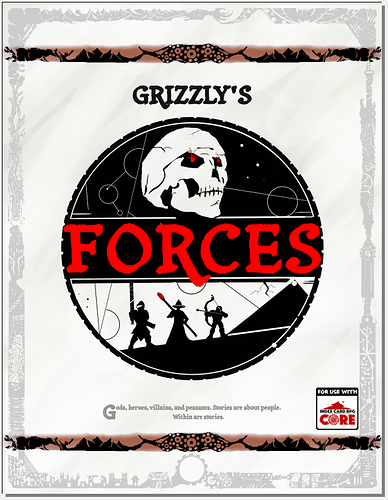 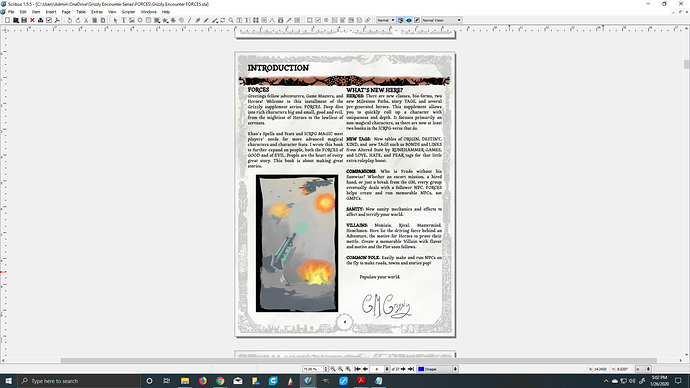 I recently bought @Khan’s book, Khan’s Spells and Feats. It’s awesome! It also saved me a TON of work in FORCES, as I was working on a very similar system of Feats to what he has in his very fine supplement. If you haven’t already, then get it, it’s definitely for more than just mages.

That being the case, it also shifted the focus of FORCES away from mechanics and more towards a story-creator for heroes, NPCs, and villains. It will have and add lots of stuff to ICRPG Core, MAGIC, and Khan’s Feats. Anyway, the gist of what will be there is in the Introduction page, plus some more. It’s all a giant WIP. So, if you’re interested in this project or have something you’d want to see in this, let’s talk about it here!

Edit to source page: Altered State is by Alex Alvarez, not RUNEHAMMER.

Yes, Fitting ICRPG a bit more into the D20 spectrum is a very cool route to go.
Not my flavor…doesn’t mean I would have any trouble buying, collecting and or using aspects of it for my own bizzare concepts!

I see you hiding there Cura!

Agreed! Khan’s book is excellent.
And this sounds swell too.

Thanks for the shout-out and kind words @GmGrizzly!

You want to build on Core, MAGIC and my book? That’s totally awesome.
You seem to have many pages written already but you want to change direction, so where are you at this point? How much of your new vision were you able to complete?
Do you plan to sell this or make it PWYW as all of your previous stuff?
New TAGS for origin, destiny and the like is an excellent idea. I was thinking about them but didn’t have the time to get to it.
As a whole, FORCES looks very tasty! Do you have a time frame yet for release?

Re FEATS: I envisioned FEATS as build options as flexible and as fun as SPELLS and I think I succeeded. To this day, I haven’t received even a single complaint about them. A couple of people asked for clarifications here and there but that’s it. I think it is a great addition to ICRPG and people seem to like it. I am pretty proud. Non-casters need their toys too, eh?

@Khan, the new vision has the skeletal framework, needs me to edit and write the text and a bunch of artwork, which is what’s going to take the majority of my time. I plan to have minis of the new heroes and other stuff, and a few adventure prompts to write based on some of the villains and class quests. It makes more sense to direct players to your book for info on using their FEATs, but new FORCES classes will be similar to MAGIC like “pick 2 Feats from DEFENSE and UTILITY” and KINDS like Mystic: replace one FEAT mastery with a school from MAGIC. Stuff like that to integrate and build off your book, maybe adding some FEATS as well, if I think of any. But keeping your mechanics, I think they’re awesome! Companions have been pretty well defined thanks to play testing and feedback from @GMagnus. Milestone Paths are good, one based around utility characters and one around Charisma. BIOFORMs are nearly done, they keep multiplying!

Timeframe, I’m more hesitant to give. My new-year’s resolution is to publish by Christmas. It’s a ways away from review and edit. The end product will determine if it’s worth purchase or not, but I also plan on experimenting with POD, so it will probably be a paid product. Reasonable price, ofc.

Ah, I see. So you are way out from release. As long as the result is good, when you release isn’t that important. Artwork seems to take the most time but there is a lot of time till Xmas.

I like your game plan; sounds good to me.

As always, ping me if you need any help with anything and good luck!

A bit. But, I feel as though it’s going to be pretty awesome: 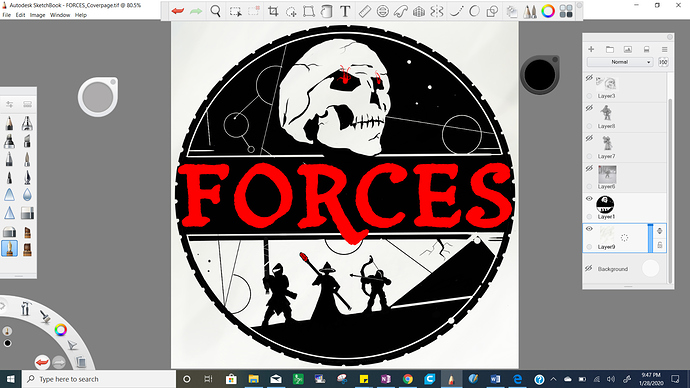 Just have to keep chipping away. A little bit every day. 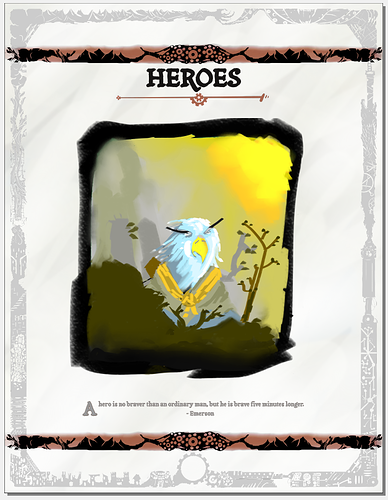 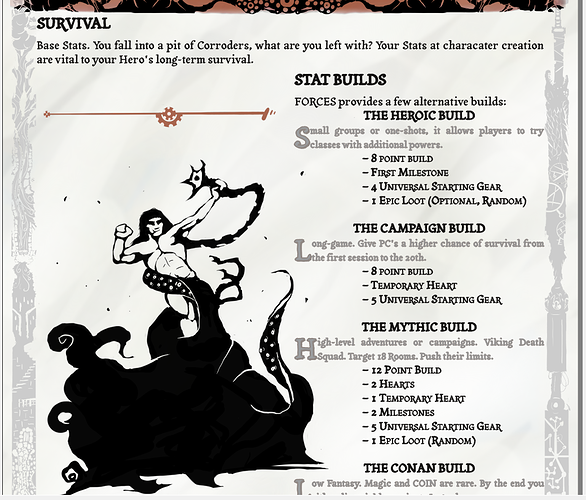 You have my attention, sir…

@Khan thanks! I had fun playing with them. I use the Heroic quite a bit, but I tend to run 2 player games.

@RushWingate hehe yeah, that one is brutal!

Making progress. Like I said, I already had a lot (not all) of the writing, just need to grab art and put it all together. And edit. LOTS of edit. Since my computer went down, most material is in google docs, iNote, and my journal. 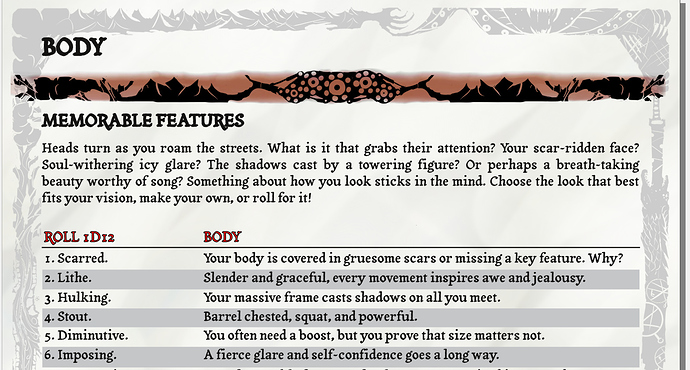 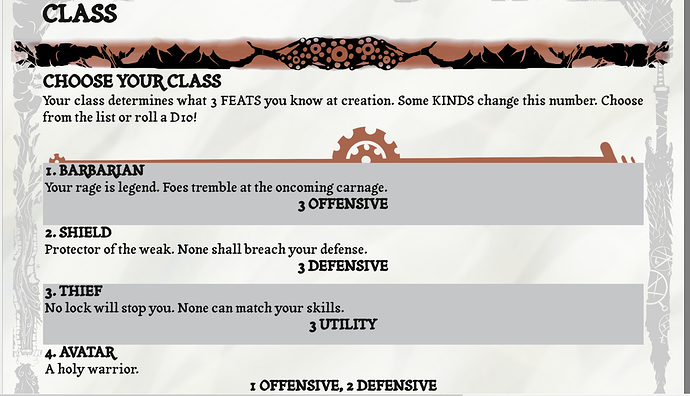 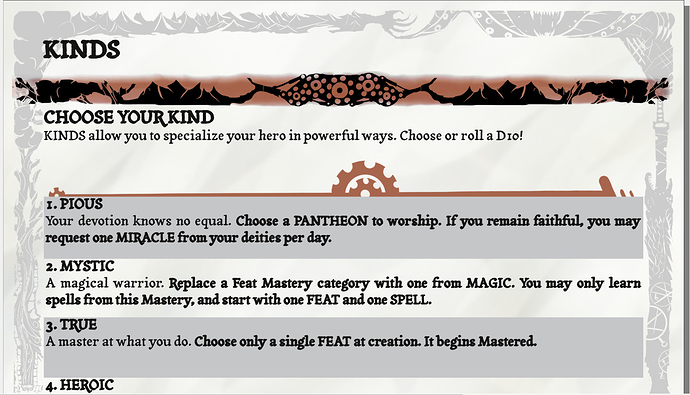 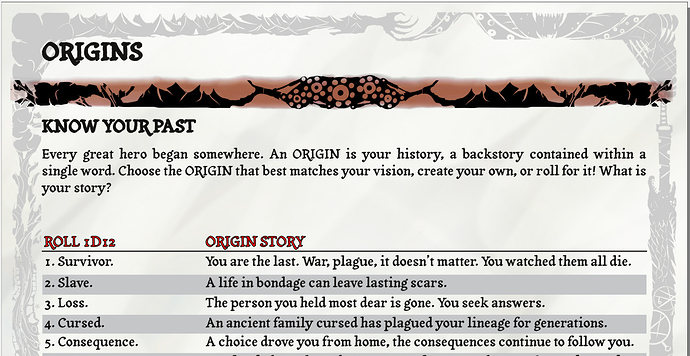 And that’s today! Had more free time than I was expecting, and most was a copy/paste from google docs. Still working on better descriptions for the classes, those were mostly placeholders.

Love this work you are putting together

Some other KINDs inspired by Dungeon World:

QUESTER (KNIGHT/PALADIN/etc): “You are devoted to a quest!” Decide a quest that is in line with your principles/God/order. Whenever you are acting directly towards your goal, gain +1 to all rolls. If you fail your quest, take -1 to all rolls until you redeem yourself.

OATHKEEPER: Oaths provide corresponding boons! Oath to never lie = Earnest: Persuasion is always easy. Oath to protect the weak = defender: ultimate effort when protecting someone vulnerable (eg. 0hp/prisoner,etc). If you break your Oath, you become cursed (GM decides) until you find a way to redeem yourself.

I like those! One of the goals of FORCES is, like all things ICRPG, is to encourage that DIY spirit. I’m only starting with 10, but those are great!

As of today, I have finished the writing on the first 17 pages, which completes character creation. Next is the artwork for those pages, then Progression: additional FEATS not already in @Khan’s Spells and Feats and two new Milestone Paths. That will complete the HEROES section of the book, then it’s on to NPCs! 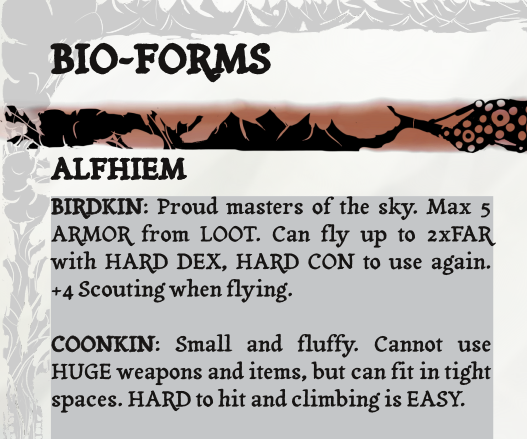 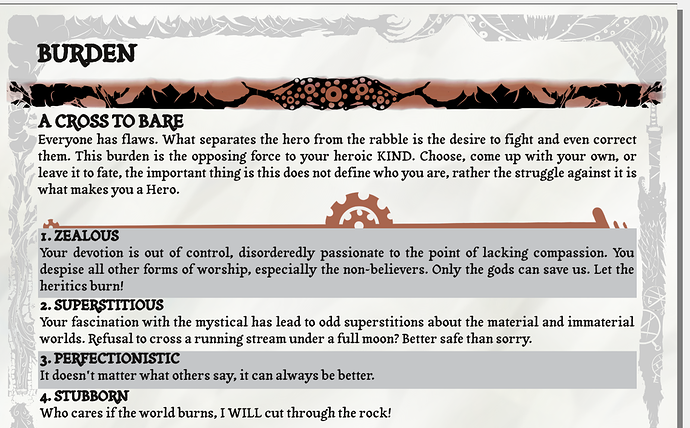 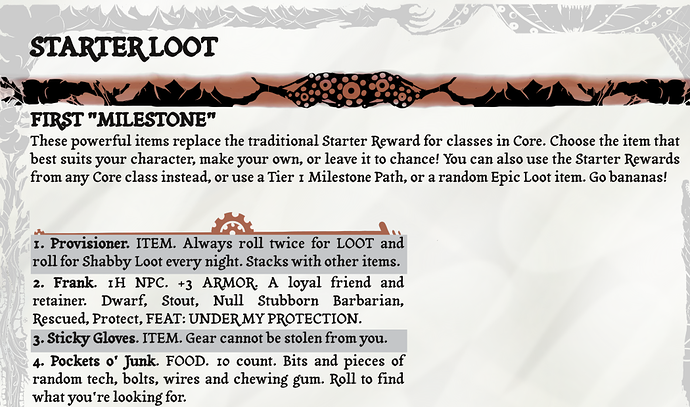 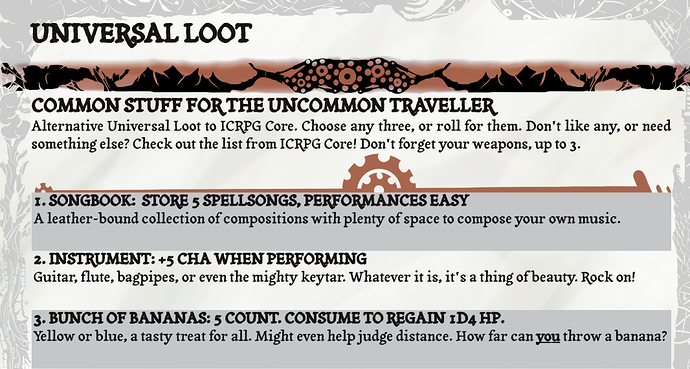 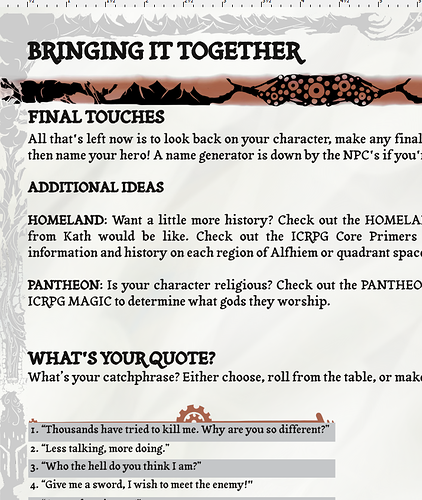 17 pages already? Tell us what substances you are using.

“A cross to bare” - shouldn’t that be “bear”, unless you are making a play on words or something.
Other than that you seem to come along very nicely. You seem to be on a roll!

Specially like the idea of a random epic loot to build a character around. I got:
Crown of Goblins
Pet Slime Cube
Brain Horror Helm

@Ardon, that’s awesome! Random epic loot is the best. I had a player start with the ring of invisibility. It was interesting.