I was searching the forums for ideas on running the race from Speed Kills and - after developing my own - thought it might be worth sharing what I came up with. If your players want to focus solely on the narrative, I would run the race like a Skill Challenge, but this framework is based on the idea that my players will enjoy a granular, beat-by-beat race - and that we all love the podracing scene from Phantom Menace and the N64 game from which many of the ideas were drawn.

The course is divided into a number of zones (think Beggar’s Canyon, Canyon Dune Turn or Hutt Flats) and each zone subdivided into a number of lengths (usually 2-to-5.) Moving one length is CLOSE, two lengths is NEAR and three lengths is FAR. Each zone has unique features (something fixed you interact with/avoid on your turn) or complications (something that the next racer must deal with, like shooting Tusken Raiders or flaming methane geysers). Each zone and its table is written down on an index card for easy reference (see example card below). 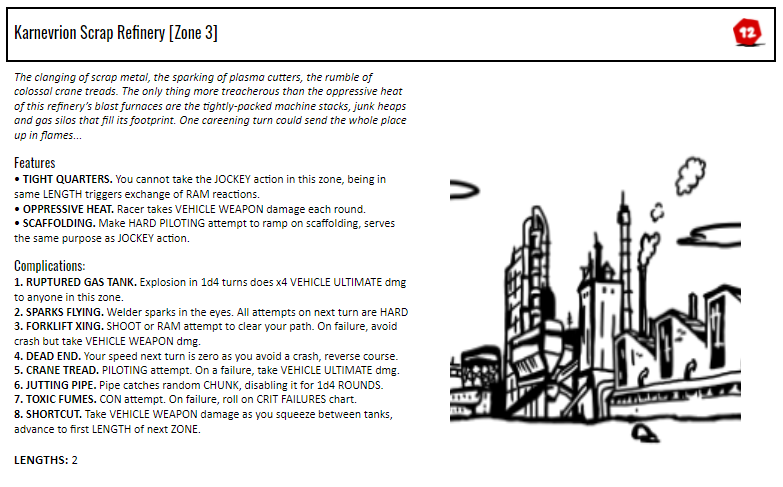 On your turn, you:
1. CHOOSE SPEED. Based on the limitations of your racer’s engine, decide whether you move SLOW (move CLOSE, take 2 actions); FAST (move NEAR, take 1 action); or HYPERFAST (move FAR, take no actions)
2. CHOOSE ACTION. If your SPEED allows, take an action from the list below or think of how your character would react.
3. ROLL FOR FEATURE/COMPLICATION. Roll 1d8 for the current race zone to trigger a complication for the next racer in initiative/race standings.

Assuming that a racer can only hold one or two operators, create some NPC racers for your other players to control on their turns - an index card with relevant ROLLS, one or two SPECIAL ABILITIES and an AI chart to make their lives easier. That last bit will also keep your NPC’s from acting too kindly to their fellow players.

Let me know what you think or what you would change. I hope this has given you some inspiration - or that you can improve on this idea and make it your own!

I did something similar when I ran Speed Kills. Great work!

Do you have an example? I’m not certain I follow how race order would work. Seems cool, though, and relates to a project I’ve been thinking about - a sort of mad-max death race thing.

@zdbarnett This is AWESOME! Thanks for sharing. I recently ran a pod race for our players using Savage Worlds to test their Chase rules. I really like your system for ICRPG. I’d LOVE to see you string together all of the locations you built out. That’d be a lot of fun to drop into a campaign.

@The_Merlitron - The racers acted according to their place in the race, at the given moment - so, first place went first, second place went second, etc. each round. I made little tags with each racer’s name and jockeyed them around in initiative as racers passed one another, gained ground, or even crashed and burned. It took a bit of juggling, but added another layer of excitement and narration as the position of each racer was constantly in flux.

I created racer NPC cards ahead of time with a unique ability or two and a small A.I. chart and had the players run an NPC during the race, giving them another layer of buy-in. As their NPC racers would get shredded, I’d hand them another NPC card until I was only running the main baddie and NPC racers became memorable characters, through their deaths or unexpected successes!

I started running ICRPG Warp Shell 3 sessions ago and I’m starting Speed Kills tonight. Thanks you for this, it really helps with the Death Race scene! I’m a bit stuck coming up with ideas for more Features and Complications. Can anyone share ideas on what they had for various zones? I was thinking of running Salt Flats and Pipelines.

I’ve been meaning to post these for awhile, so here’s my motivation:
https://drive.google.com/drive/folders/1ER80Ck5o9LLqw1LjTGqI8fqGQhu8cNOo?usp=sharing

That link contains all of the documents relevant to what I dubbed the Turga’s Eve Classic (borrowing heavily from Speed Kills but also The Phantom Menace.) I’ll post a few screenshots as examples, but if you click through, you can download the originals and tweak them as you see fit! 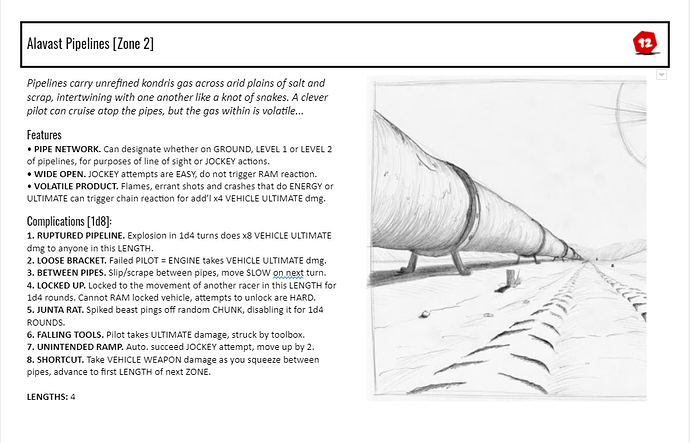 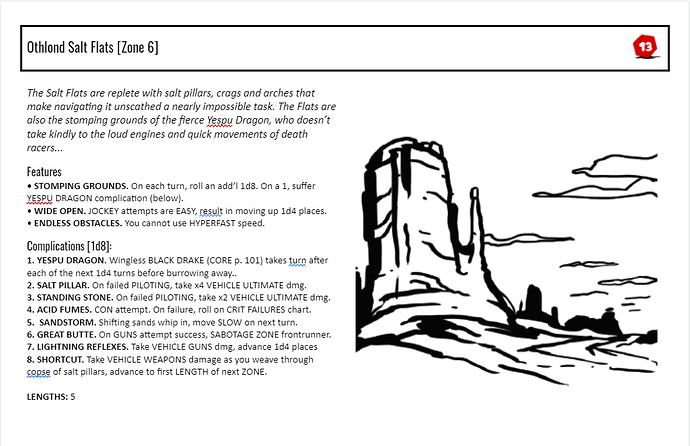 I ran this last week and it went really smoothly and my players loved it. They really like that every zone feels different, with it’s own features and complications (the practice race I did previously was the same in each zone). I used your idea of giving the players an NPC as well: so there are 10 racers, it feels chaotic, but everyone gets even time on the dice. We ended the session with most racers in Pipelines, all in the same length, with Phantom in front. Can’t wait for the next session. Thank you for this!