I’m deep into replacing my ICRPG spell lists with some kind of formless magic to give my players more options and not binding their imagination to a pre-written spell description oneliner. I’ve pre-discussed the basic idea with my players and they seem to like it. So now I’m working on that idea to refine it a bit more.

I’ve written down some ideas about handling the chaos which will arise from that concept. Maybe you’ve got an idea or two on what to also consider. 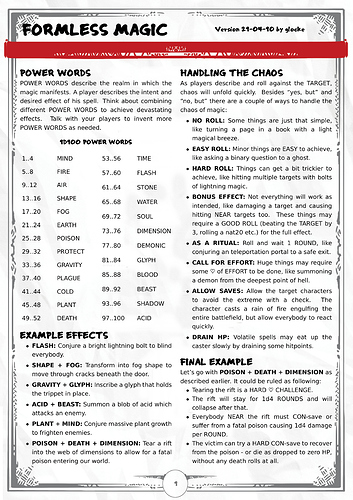 This is really fun. I have always wanted to run a game with all magic user PC’s and give them something like this.

You could get inspiration for power words from Maze Rats (which has the best random spell generator IMO).

Another thought, maybe “codified” spells exist as well. These would be the spells as written in ICRPG (or whatever rpg spell list you use). So like, Arcane Bomb is a spell that has been perfected in a “laboratory setting”. The idea being that a bunch of wizards have written down and peer reviewed the formula over the years. Maybe they are less powerful, but more reliable (Nat 1’s are just a fizzle, no accidental side effects).

That could make finding Power words as loot a bit more interesting by making them more powerful.

This is nice, I’ve made some weird formless magic systems for some hacks in the past that I might post here later. But right now I’m using maze rat’s magic, which is as basic as “glue together two words and you get a spell”.

Like it, not far off what my thoughts of formless Magic could be.

The 5 colours of Magic the Gathering

In the same spirit you could swap the MTG schools out for the elements of avatar, or take the names of the school titles in the magic book, or make your own.

But I have to admit the more I think about it, mine is very broad, yours more on the point, kind of like your power word style better

Alright, here’s the magic system I designed for Index Card World (ICRPG+Dungeon World hack). Instead of any of your 3 starting weapons, you can choose to have a magical foci aligned with any of the 20 Magical Domains (yes, it is a rolling table xD), which are items that you use to cast spells. Spells are just a target and an effect, you do this in a freeform fashion.

Instead of always rolling a check or spending HP, you now use Mana to cast spells (although you CAN spend HP instead if you run out of mana). Start with 1

(10) of Mana, and gain more using star crystals, pretty much like life hearts for HP.

How much mana you spend depends on the conditions described: 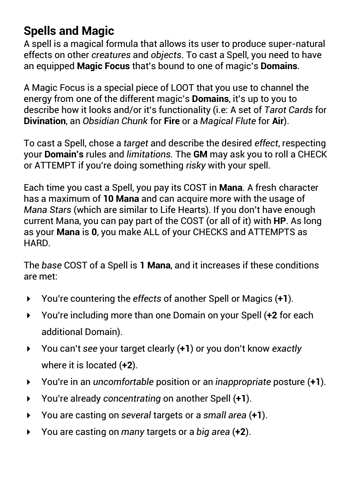 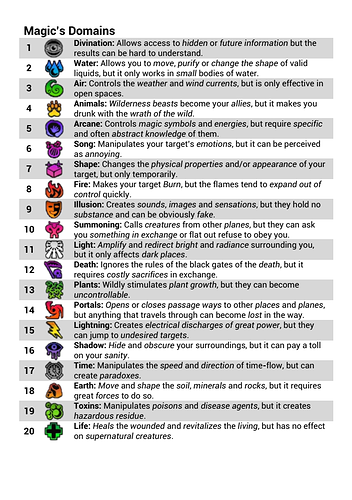 image.png699x991 247 KB
Now be mindful, the way this was designed means that the limitation on casting is through mana usage, not through making checks, you should ONLY roll a check to cast magic if what you’re doing is risky or can fail, like attacking an enemy with your magic.

That’s pretty much it haha. I included some descriptions and limitations/dangers for each magic domain so both the player and the GM can work on how magic works and what can go wrong using it

EDIT: I translated it to english in a pinch so it probably reads horribly lol

I think you’re really on to something here, @glocke. I need to chew on this more and try it out, but my gut is saying this is the stuff I’ve always wanted from a mage. Instead of spells being so specific, let the player play with the power words, combine them, and come up with cool stuff of legend on the fly.

@Nimlouth I love your list of Domains. I especially like that you included how that magic can go wrong. I think that blends quite well with the POWER WORDs. How would you handle telekinesis? Mind control?

Yep, Domains and Power Words are more or less the same, so even tho I would suggest illusion, song or even shadow for mind control and arcane or earth for telekinesis, you could easily create them on the fly.

Telekinesis: Move objects with your mind, but requires uninterrupted total concentration.
Mind Control: Manipulate other sentient creatures like puppets using theie desires and fears, but it can backfire leaving your mind exposed.