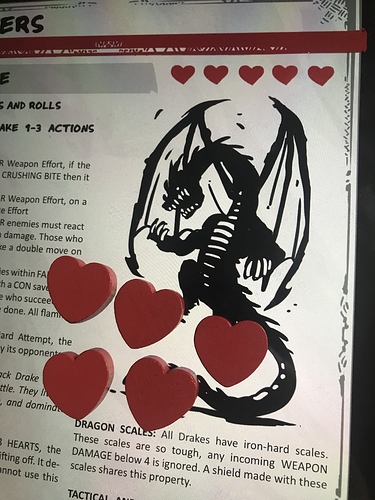 So having put a lot of thought into the @Nimlouth post about a possible merge of ICRPG and PbtA game systems, my question is would you drop variable damage dice and use a fixed more narrative damage instead?

I thought this would tie in nicely with Hank’s use of hearts, we’ve used small wooden heart tokens during our ICRPG games. ie: instead of rolling a d6 for weapon damage, when a successful blow lands, then you just mark damage, in this case lose a heart. So a Black Drake could take 5 hearts or 5 hits basically. This is how it’s done in most PbtA games, you just mark some kind of hit/damage on a track, in our case the track is the rank of hearts… now hold your horses, a 5 hit dragon?! That’s worse than a 16HP dragon in Dungeon World I hear you cry! Well my friends, I’d encourage you to read this post about why a 16HP dragon is terrifying!

So armour will take a much more important role, using the new damage reduction rules, armour could either reduce damage, give us a damage threshold to beat or just negate damage completely.

…the hero lands a successful blow to the drake…

Example A variable damage with reduction
Roll a d6 weapon damage and reduce the result by 4 for the armour, result total is amount of damage dealt. Still uses hearts as HP, so mark off damage from HP.

Example B damage threshold
Roll a d6 weapon damage but you will need to roll over a 4 to deal damage, luckily you rolled a 6 against the heavily armoured dragon, mark off one

from the Drake. Rolling under would have resulted in the drake’s armour doing it’s job and absorbing the damage completely.

Example C simple damage track
You hit, so just mark off a

of damage, now the Drake could use a

to negate the blow completely, but reduce its armour rank by one, so now only has 3 armour. GM narrates the damage dealt based on the severity of the blow. Some weapons could ignore armour or deal heavy damage marking off more hearts in a single blow.

to negate damage completely, needing to use one for each damage die, so reducing it’s armour to 2 from now on, making it easier for future attacks to cause damage.

Example E fixed damage
Still using hearts as HP, but the blow landed and caused a fixed amount of 3 damage (for d6 weapons). Usually used as an average to speed up the game and no damage rolling.

PbtA uses a lot less bean counting but you lose the variable damage scale, however there’s less disappointment when you land a good blow and just roll a 1 for damage.

Or perhaps you still like using the original rolling over an AC and don’t use damage reduction of any kind.

Anyway, what’s your thoughts Shield Wall, which method would you prefer at your table?

I really like how damage reduction sounds.
Initially, only really powerful attacks are able to even scratch the enemy.
But the PC can try to find a way to lower the armour (find a weak spot) to make their attacks actually effective.
To trade an armour point for the damage (example c) could still be done with damage reduction, but would be only viable, if the hit was really intense.

You could always do any combination I guess, how about an…

Example D
Hero rolls a nat 20, critical hit, dealing a d6 weapon damage + a d12 ultimate damage, the GM decides the black drake uses up 2 armour points to negate damage completely, needing to use one for each damage die, so reducing it’s armour to 2 from now on.

Would it be a bit of an anticlimax after rolling a critical? Maybe, but it hasn’t gone without effect, hero has damaged the black drake’s dragon scale armour, revealing a weak spot and making subsequent attacks easier for everyone to cause damage.

Gotta admit PbtA is revolutionary and somewhat wonderful in changing my point of view or RPGs…not as cool playing it on off days.

I had a very long post set to send, but I’m not sold on the playing side of PbtA. Ultimately I like option C the most. It translates to most ease of you!

Would it be a bit of an anticlimax after rolling a critical?

I see it more like, instead of dealing damage, you trigger a cutscene