Insert mental calculation of: Find an adventure, brave the ‘mask’ world for some more card stock, print out Hero’s of the Hammer figure flats (cut and fold so they can pick from all the options), manipulate the index cards in Photoshop as 2-fold prop pieces, print and fold, find additional ideas for monsters, add some photoshop work to the boss encounter paper mini, draw some quick maps, struggle to find my missing dice, clear the dining room table, and create some pre-generated characters…

“Play ICRPG with my kids.”

Fast forward from 8 AM to 9:30 PM when I finally got them all to sit down with everything set for a session.

Index card vol 2 – the Patriarch was their mission giver; they thought he was a GIANT rather than just a large card for easy visibility… Should have scaled it to match them. Go investigate a mysterious abandoned tower believed to once belong to a wizard. 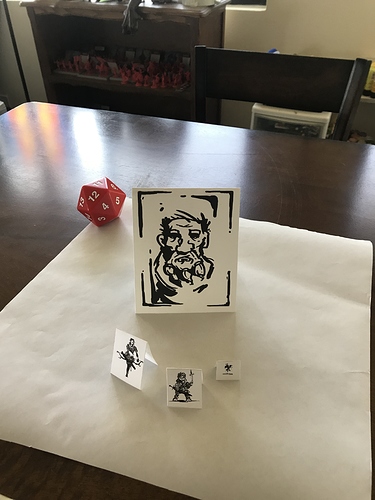 The players could have scouted around the base of the tower and possibly found the secret entrance to the lower levels which would have led them backward through the adventure but they all rolled low on their CHA rolls and determined the tower, in its crumbled ghostly state, was the safest tower they had ever seen! So they went inside. 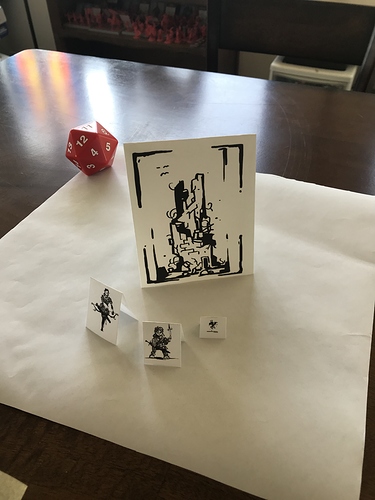 Inside the base of the tower they see the trap door and immediately go for it. Not a single one of them tries to look for threats. They all roll terrible on their attempts to pull open the trap door which was a good thing; they almost skipped the rat spawn. 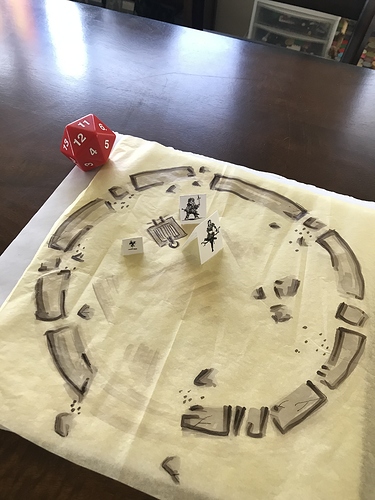 As the players attempt to open the trap door into the tower (10 EFFORT), 1d4 rats emerge and attack! Each round a new rat appears from the rubble. Max of 6 rats on the board at any time. Players have to realize getting the door open is the only way to escape the rats! Being that they are new to role playing, I had my daughter make an INT roll on the 3rd round to figure it out. 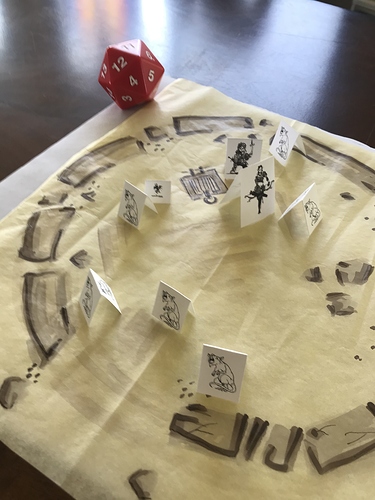 This was actually my most fun “room.” The players escaped into the tower and closed the trap door behind them. They have to use a torch to light their way in this dark hallway. The hall ended in a rotted door with with words ‘Scriptorium: DO NOT DISTURB’ written on it. The floor required a DEX roll to fully reach the other end. The concept was to create a gap between the party going into the next adventure but they actually were smart enough to wait until everyone made it to the other end before doing anything else. Whoever touched the door first would cause the door to crumble into dust. The knob and hinges clatter loudly on the floor. Once this event is triggered, players have to make DEX saves as the tunnel begins to cave in. Rats from the previous fight (1D4) fall into the tunnel. The idea is to push the players into the next room while also forcing them to deal with spawning rats. Due to the door being destroyed, they don’t have any way to block off the rats. Luckily for the party, the tunnel fully collapsed immediately and only 2 rats managed to escape into the next room with the players. 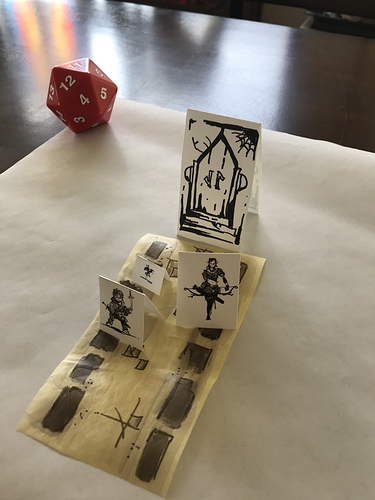 Skeleton monks making scrolls and a huge door with an impressive lock! Upon breaking the silence, the skeletons attack! In this encounter I made the skeletons immune to edged weapons; they only dealt 1 damage regardless of what the player rolled. I had my daughter who wanted to be a pixy fighter, make an INT roll again to realize her weapon was not doing as much damage as it should. Blunt weapons deal Ultimate. My wife, the archer, is wearing a helmet. She decides to do an epic head butt to kill her skeleton attacker! I ask her to tell me what that looks like. She gets confused. My son tells her, ‘You blog – you know how to write. Tell us what this looks like!’ Her eyes glitter. We get an epic description of a helmet bash followed by a crack, moan, and a split second pause before her attacker crumbles.

My players are beginning to figure things out. They find religious medallions on the monks and promptly put them on. 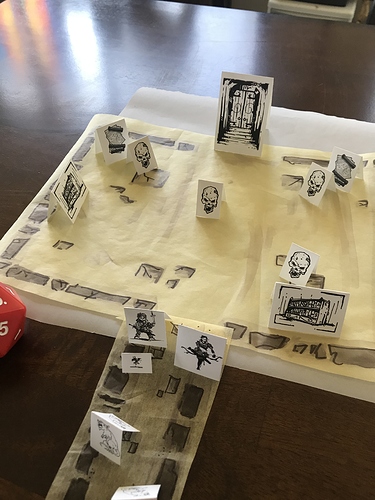 While dealing with the locked door, the boss was preparing to make his escape based on how many rounds it took them to make it through the door. He nearly escaped; they opened the door on the last round and then managed to role play through the encounter.

The boss, who is about to flee and order his zombie creations to attack the intruders, sees their medallions and instead asks who are they and why are they here. My players proceed to RP the crap out of this encounter. They roll CHA like bosses. They order the villain to destroy his zombies because they are corrupted and no longer loyal. They order him to help them load their cart with all his stuff. They get a map from him for the location of the next encounter.

Then they try to bury him alive in the escape tunnel by tricking him to go back into the tunnel and he takes 19 effort in damage. Which means he has 1 HP left… And their eyes light up; “He’ll be back.” They whisper. 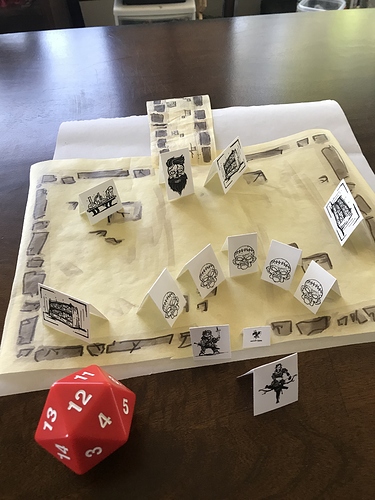 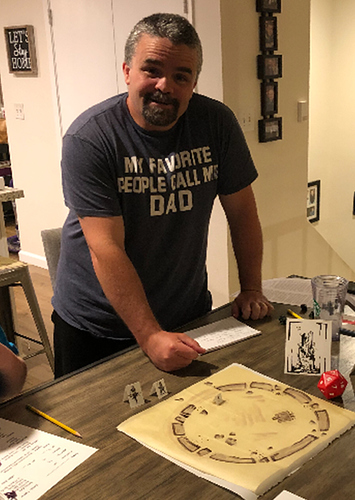 And this is what I used: You hold in your hands the introduction to the world's greatest fantasy roleplaying experince, the Dungeons & Dragon

I came across these older ‘fast play’ D&D modules which are great for new players. Their writing it excellent too. Not nearly as wordy as most things you come across and has that old school feel of simple rooms with quick comprehension. Part one is basic and intended to teach rather than punish. Part two – which we will play next – gets a little more advanced.

I did tweak the ‘scenes’ to match my own vision for the tower.

Great read, and pictures… thanks for the little journey

This is so awesome, thanks for sharing your fathers day fun!

This makes my heart feel fuzzy. I played four against darkness with my son who’s 3. He made me keep playing after it ended and today asked me to play it again. Like you said… Hooked.