Fantasy Roleplaying in the Bronze Age

Hey everyone! It’s been a while, and I can no longer edit the original post. As such, here is an updated version of the post that incorporates much of the material provided by you all. It’s also reformatted in a way that has been more helpful to me in game prep and conceptualizing. Thank you so much for the comments and insights!

Armor: Armor is crafted from animal hides (leather, included the hides of crocodiles and rhino), copper, and bronze. The most common armors are copper helms and studded cloaks, shields of numerous shapes, linen corselets, and the like. Particularly wealthy individuals or organizations might have “scale” armor (hoplite panoply), bronze breastplates, grieves, and bracers, but this style of play is rife with nearly naked warriors who survive by their wits.

Items: A wide variety of items, from art to tools, are created with wood, clay, stone, and metals. Pottery is especially popular, as is weaving and painting with natural dyes. There is extensive use of levers in developed areas.

Medicine: Well established use of bandages and natural remedies such as honey for wound treatment. Cauterization also exists, as do numerous questionable surgeries, incisions, and so on. Some knowledge of how infections spread can be traced back to Thucydides in Greece, who noted that the plague of Athens spread from infected individuals.

Travel: There are crude roads in many places, but much of the world is wild and disconnected. When traveling, it is often on foot. Horse barding does not yet exist, so supplies and goods must be carted on the back of work animals. Chariots, however, do exist. Sea travel does exist. Navigation is often done by reading the sky and using landmarks.

Writing: Some written language exists, especially among the erudite and elite. It is carved into clay tablets and pots, written upon animal skins and cheap cloth works. Papyrus with natural inks harvested from animals such as squid and octopus may be used by the wealthy in particularly dry environments. Much of language is oral or pictorial, though. Most people are illiterate, but this doesn’t mean they are stupid.

Personal Security: Locks are exclusive to the elite, if they exist at all. However, many ancient world societies developed various ways to secure their homes. For example, building doors might be reinforced with barricading apparatus called fox locks (heavy wood or metal beams angled against the door and braced in indentations in the floor and walls).

Fire: Fire is important. The dark is scary, and dangerous.

The Big Picture: The world is not well explored, superstition is rampant, the natural world is explained and understood through the lens of the gods. City-states containing a few towns and many villages are common, and are often ruled by a small subsection of the elite. Great cities might have armies in the hundreds or more, and war is a way of life for the elite. There are countless nomadic groups who have yet to turn to agriculture and laying down roots.

Religion: There are temples (ziggurats, pyramids) to the various gods, most of which exist within the few great cities. Most villages do now have temples, and instead have a single priest, shaman, or spiritual leader. Human and animal sacrifices and animal worship are common, as are rituals that would be strange to our modern eyes. Polytheism is the standard, and the gods are often cruel and capricious. They have all of man’s moral failings, because man and the gods are very importantly linked.

Population: Large cities might range in the thousands, but perhaps no more than 10,000 in any one. Towns and villages had far fewer residents, and populations were sometimes quite volatile (disease, birth, war, raiders, and so on).

Business: Most towns and villages have an inn or two. They have a few private rooms, but most pay to sleep on the floor. Signs and advertisements would only exist in some places, as many people are still illiterate. Many businesses would focus on providing goods and services in exchange for other goods and services.

Wealth: Wealth is most commonly represented by amber, beads and shells, spices, jewels and gems, silks, ivory, lumps of metal, art, land and property, livestock, and slaves. Coins might exist, as seen in Greek, Roman, Byzantine, and other areas, and are likely made of copper, silver, and gold. Tin, if available for use in making bronze, would probably be reserved for weapons, armor, and tools. (My suggestion, simply for the sake of genre emulation, would be to shy away from coinage and focus on other forms of wealth)

Counting: Most people can make markings to count, even those that are illiterate. As such, and per above, coinage can exist.

Lodging: Most travelers, if no inn exists, would stay with a family or in a communal hall. Adventurers would do well to make connections and build relationships with the inhabitants of different areas if they want to achieve Rest.

Law: This is a mostly lawless time when a good spear arm and a golden tongue to justify it are of great use. Codified laws do exist, especially in advanced areas, but these are exceptions to the rule. In some places, the king or pharaoh’s word was law. Model laws after your favorite ancient world civilization.

Rivers: Rivers are exceptionally important, as are other water supplies. Rivers allow for very quick travel.

Other: Waste removal might be done by throwing it along the roads or burying it in the dirt. Rain and flooding could be dealt with through trenches. Festivals, ceremonies, and rituals can and should be closely related to things such as natural events (eclipses, the seasons, famine and drought, for example).

Remember, these people are only one step removed from the late stone age. It isn’t just their tools that are primitive. Attitudes, behavior, laws, skills, sense of place and belonging in the world, and the dangerous of an ancient ecology each present new and unique challenges as compared to a standard medieval European setting.

The adventures the player characters set upon are likely personal, local, and focused on people, things, and places they care about. These games should be, in my humble opinion, very much about the player characters and their world. Most of their adversaries are probably human foes, animals, the environment, and the schemes of the gods. We might also consider sorcerers, demons, and unspeakable horrors for fantasy elements. Whether you choose to go high fantasy/magic or sword and sorcery is up to you. Lean into the deified mythic elements, or keep it focused on mud and eldritch things.

And finally, this outline is not necessarily historically accurate. It does not represent a specific bronze age, or a specific location in our real world. These are guides to make play in a bronze themed game unique – nothing more, nothing less.

This post will likely be updated again in the future. Game on!

Awesome!!!
Only thing i disagree with is coastal navigation was very common. Intercity commerce and even far flung metal commerce was common.

Large international/state commerce is what made The Bronze Age the Bronze Age. Bronze in most things was a better metal than the “soft” Iron of the time or even 1000 years later.

The Bronze Age was a weird “golden” era. But that golden era only hit certain City states. Most people didn’t know it was a golden era. Most people lived the same way they had for thousands of years…but certain city states where historic in moving process forward.

Edit: after posting I found the podcast on the fall of the Bronze Age that I had been looking for. 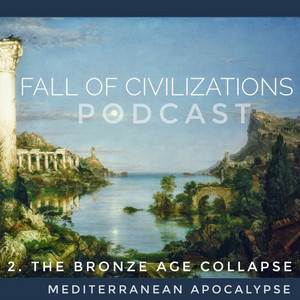 Listen to this episode from Fall of Civilizations Podcast on Spotify. Around the year 1100 BC, a wave of destruction washed over the Eastern Mediterranean. It wiped whole civilizations off the map, and left only ash and ruin in its wake. This...

Off topic, “The Renaissance” was only really pushed by about 150 people and enjoyed by perhaps a couple of tens of thousands until the enlightenment.

I think the bronze era was similar. Only enjoyed by a few. Not necessarily the rich, but definitely the well connected. Most died by their 30s.

Shrines would be a better replacement for “inns”. Religion was incredibly important to many. Polytheism is the norm. But a couple of traveler gods might have something similar to Inns. Same god may be respected differently in different city states. State and religion are often intertwined. Priests and priestesses often performed clerical duties, keeping records, education of the wealthy, training young and rich to fight, and lead. Advising semi literate leaders.

Sorry ranting, but it’s a great setting to explore.

Thanks for your reply! It’s always nice hearing your thoughts.

Regarding inns, it was the only word I could find that was civilization-neutral for “a place where travelers could rest”. Is there a better term to use that you’re aware of?

Costal as In seeing the coasts while navigating was commonplace for those with the means. In fact it was central to many power bases for a while, eventually or for a time a monopoly or duopoly would emerge… that ruled the seas and commerce.

It’s suspected that those wanting to travel across the sea, away from visual range of land would island hop, or have elaborate jigs. (When that mountain this marker and the mast are aligned with that star and those two markers with that star we travel in that direction until the third day…then these two markers and that marker need to be aligned with the center of that constellation until we get see the isle of somewhere on the port side…) or they risked it and often got lost.

As to Shrines Vs Inns Vs Hostels.
Your world your rules…but for small people (not the elites) religion and stories told at the cooking fire or the hearth was the only real entertainment. And that entertainment had to be multigenerational.

Inns to me are a very British/Northern European thing. Medieval Mediterranean’s slept at churches, near shrines on the side of the road, rented small pastures or lofts when traveling. Really cold weather wasn’t a thing.

I don’t suspect the Bronze Age was that different.

Most important fact–this is fantasy. You can consult historical information all you want, but the ancient world didn’t have real dnd -style monsters running about. That changes many things. Are there ruins of an even more ancient civilization? If so, who were they and what was their level of technology? Don’t spend all your time creating a setting and then have no idea what long term adventure the players will do. What will be the “purpose” of the characters being together at all? Odysseus and crew were trying to get home… And your players? There is is a LOT of thinking to do here on the front end. Good luck.

Runequest comes to mind for me

That makes sense. RuneQuest’s world of Glorantha is a Bronze Age setting, after all.

There’s an Appendix K in the Guide to Glorantha (a massive two volume coffee table book) with literature that inspired Runequest-worldbuilding and the Bronze Age-feel. I could send you a screenshot of it and you could have a look if any of the books are of interest for you (depending on how in-depth you wanna go).

Although for my own purposes “bronze age” is more of an aesthetic good-enough approach, I’m willing to bet there are some goodies in that Appendix. Would you mind screenshotting it and posting it as a comment here so all can see, assuming there is no serious copyright/IP infringement on the facing page?

Thanks for the idea!

US copyright laws are complicated stuff and I’m not a lawyer so I’ll err on the safe side and won’t post a screenshot here. Searching the vast plains that are the internet for words like Runequest Appendix K might show results for an Appendix N from earlier editions though.