On the other hand, there’s stuff that just wouldn’t have happened without the Discord.

Anecdotal example of mine: My Grimoire Skills system for my VDS Hack would NOT have happened without the Discord. Why? 'Cause Hank responds much less here than he does there, and it would not have gotten where it is without his help.

But, when the bulk of it was done, I brought it here. Notice it has not one reply. Zero interaction. I’ve been editing it as I talk to my walls.

The Sharpshot and Weapon Specialist fixes, from crits to hits? Happened because of Discord. It was played out there, in play-by-post fashion, after some discussion on probability of unending loops happening.

There is a place for both. Learning to balance it is the key, not favoring one over the other.

Absolutely! That’s one of the great things about Discord. The ability to catch people at the water cooler and get that instant feedback and real time dialog. Plus, Discords grown from Patreon generally ensure the most passionate fans of a thing so the energy is there. They also tend to be the primary source for a creator who uses the model (which makes sense).

I now think that most of what I suggested and hypothesized earlier regarding this topic is probably wrong.

I have had some time to consider further what I wrote here previously on the subject of forum participation, and I have been inspired by recent events to reflect upon it and reevaluate it.

The short version: Forum participation may (or may not) be a DESIRE, but it is not a NEED, nor is it necessarily a means to a significant desired goal.

I’m no economist, but I understand that underlying need of any for-profit company in a capitalist system is market share. As long as Runehammer Games is principally a game developer and publisher, operationally that means book sales—even though I am certain the creator/publisher has a higher philosophical goal in mind. So if time and energy spent here basking in the afterglow of discovering ICRPG were instead channeled into more direct action fueling book sales—organizing and playing the games, introducing new players to the company’s offerings, requesting Runehammer Games products in local stores, and buying copies for friends and family—Runehammer Games would be more directly served from a balance sheet perspective. In terms of these direct actions, I can say honestly that I have done my part in every one of these aspects as a humble individual working only in peripheral to this industry… 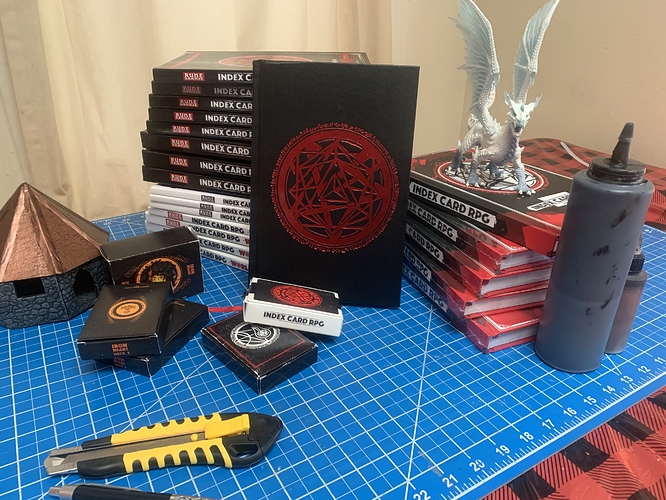 It is inevitable that more and more people are going to get excited (to one degree or another, at one pace or another) about games that Runehammer Games publishes, and it has become popular (even expected) for people to be able to pursue their interests in online spaces like this one. This is nice, but it is largely irrelevant, as it serves the community directly but not the company’s bottom line. Operationally, the underlying determination of the level of individual consumer engagement can be reduced to one simple metric: how many books did they buy?

(Other forms of visibility and buzz will surely open doors to success and profit for Runehammer Games, but such speculation is outside the scope of the point I’m attempting to make here.)

These opinions are my own, based only upon a couple of months as part of this community, a couple of years playing ICRPG, twenty years helping market independent businesses, and over four decades playing tabletop RPGs. I could certainly still be wrong, but I think—if I am—it simply demonstrates the unnecessary complexity of operating in the very privileged world around us.

I know I will continue to buy and play Runehammer games, wish the company and its creator every success, and witness the examples of the senior members here as they continue to shape the online community they helped to build.

Hopefully, my understanding of how this community works will improve in time. Thanks to all of you here who have supported my learning so far and helped to open my eyes. Thanks also for your indulgence; I have used more than my fair share of bandwidth and will now attempt to discover and reap the benefits of constructive lurking.

For me, what I plan on doing is an attempt to produce high-quantity cost-effective ICRPG resources for gaming.

What I think would be a good investment is to support good quality online gaming resources for Roll20 and other online gaming servers not unlike what you have done for VTT. A good-looking high-quality Character sheet on these systems, free goes a long way to encourage play. I also really love the card system and I am working on Cavern Cards © for printed cards and for online use. One of the things that got me into the game was these resources and now this is my main system for gaming with my gaming group.

Thank you so much for the clarification

If I may, I am a very green GM with little experience and learned about ICRPG through Professor DM, because I wanted to play something besides 5E. I think that more content is key! After discovering ICRPG I dug deep to find recent ICRPG content. My experience has been with Fantasy AGE from Green Ronin and the Cypher System from Montecook. When I discovered those systems I wanted to find a community and plentiful content to bring to my table.

I frequent my LFGS and they are itching to have more GMs. I think that’s where I would offer my two cents in spreading the word of ICRPG and Runehammer by running games.

It would also be amazing to have beginner modules that can be run as introduction. Similar to the Grey Hill Inferno, but more fleshed out.

I believe that the community here has potential and I want to offer what help I can too.

This is all to just say that I think we need more ICRPG contents, live plays etc.

@Jenetiks, Does your local store have any policies that limit games ran at the store with product that is/can be sold at the store? Such a policy stymied my suggestion of an ICRPG game at my local game store for Free RPG Day years ago.

I agree wholeheartedly with your modules idea, and it would be great if such modules could be produced as relatively inexpensive softcover books (perhaps even in a “Rolled and Told” style magazine format) so they could be found on the shelves of our local game stores.

I don’t think there are any policies that I am aware of like that at my LFGS. There are two LFGS that I go to. Geeky Tea & Games in Burbank, CA and Odysee Games in Pasadena, CA. Geeky Tea & Games is smaller and I can just rent out their TTRPG room to run any game I want. Obviously they have it decorated for D&D. As for Odysee they’re a bigger establishment and when I last spoke to one of the associates, they invited me if I wanted to run one of their tables. It doesn’t have to be D&D but the way they have it set up it’s kind of like an in-person D&D and Pathfinder league for anyone who wants to learn the hobby.

I’m working a lot now, but I do want to start running local games in the near future.

Next time you see Ron outside seeking minis, tell him I said ‘hello!’

Edit - to promote RH? Get some girls involved.

I like your themed modules. One thing I feel ICRPG does really well is it bridges the gap between full gridded maps and theater of the mind. Poker sized cards instead of index cards likewise are a finished product people can buy. I think that if themed packs of poker sized cards representing locations, monsters, loot, etc specific to each module were offered, it would be a great way to expand what ICRPG could do, and therefore grow the target audience. Most of us on here are natural homebrewer/creative types that ICRPG works great for, but this would help target the vast majority who are not.

I love your idea! And the PDF that comes with the physical product when you buy it could be index-sized illustrations like the volume one to three of Index Card RPG. What do you think?

Couldn’t hurt. It stays with the theme of ICRPG. I’ve always preferred the poker cards because of the size and the finish that allows for easy sorting, but I’ve used the original sets at full size plenty.

Eventually I’m thinking of running ICRPG games at my local library, and perhaps at a con someday, and I’ve heard some cool GMs give souvenirs or RPG material to their players at the end of a session. What about making the Quickstart manual POD? Could be cheap, could be helpful to give to players and spread the good word of ICRPG in those situations!

I have given out the QuickStart for free at cons, as well as giving a full copy of the book away for the last person to roll a Nat 20 during the session. I also usually buy some cheap dice sets and give those away.

Yeah, I could get the Quickstart guide printed. I’ll see with my local printer.

I think something like a crowd-sourced publication of loot and powers for the diffent settings.

Set up something on here or the discord and let the shield wall submit their homebrewed loot, spells, powers etc. Then have Runehammer print the list of more random tables or what have you.

You could make a volume one, volume two etc.

It gives the shield wall something to contribute toward. A mission. A chance to get their ideas into the next book. And Runehammer get a new revenue stream.

Set up something on here or the discord and let the shield wall submit their homebrewed loot, spells, powers etc.

Others have suggested this before. There has not been a great deal of community concurrence or forum infrastructure reorganization to support it.

I started the “repository”-category to collect similar posts in one hub-post.
If someone does that for homebrew monsters, homebrew loot or homebrew powers we can make a hub-post for each. The post-structure would be Repository: [Title] and the post would collect all posts concerning the topic. The post tag would be #repository so instead of searching different individual posts one could search the hub posts and go from there. See for instance: Repository: DM Kit Essentials or Repository: Character Sheets

Maybe you can make it seasonal. Kinda like a game jam. Then you Epublish a new content book every year. You could even make the higher tier of patreon supporters part of the voting/filtering user submissions.

Would like a softcover option of Hard Suit I just prefer softcover books. Id even pay the same price as the hardcover on drivethrurpg.