Session Zero was was mostly fruitful. Loads of interesting and inspiring locations were added. Using the primitive tools Roll20 provides we concocted the following map. 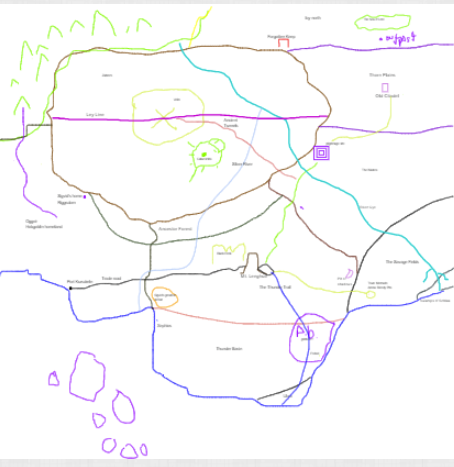 As you can see I had my work cut out for me. A couple of days later this was the result. It’s still in progress, and likely will be throughout the campaign.

The fiction starts with the party’s horde being routed after suffering a loss from a coalition army of Elves,Humans, and Dwarves. The horde had been assembled by a mysterious figure known as the Overlord. Escaping through a series of confusing tunnels known as The Rat’s Way, they emerged outside the jungle. Encountering a tent city comprised of those fortunate enough to escape. There they met with (Gnoll) Commander Bersk. Learning that the southern entrance to The Rat’s Way would be sealed, they parleyed with Bersk to return and attempt to rescue any stragglers. Bersk’s agreed, but would have task for them when and if they returned. Once again entering The Rat’s Way and after fighting with a Otyugh (one of the many perils in The Rat’s Way) they escape with survivors in tow just in time to witness a massive rune covered capstone being riveted together. END Session One.

Thanks for sharing your experience so far and the map is looking real nice!

Thanks for the kind words. Everyone loves the Thorn Forest. Admittedly it was my favorite part to draw. I had no prior idea how to render it. So I just went for it. Goin’ for it, that sentiment largely applies to the whole map.