Hey guys! Long time no see, how ya’ll doing? Me, just great - became a father a few months ago, got hospitalized for COVID, recovered, etc. Haven’t been able to game or even plan sessions for a while. But, for the past few days, I’ve had this dueling mini-game bubbling in my mind and only managed to get it down in my journal yesterday.

What: A dueling mini-game that uses dice and a form of rock-paper-scissors to settle disputes politely. The original idea was to make a system to represent a duel of skill in a social encounter, ie some snobbish noble challenges a player character to just show they are better than the heroes.

Structure: A Duel consists of Bouts; each Bout has two parts, the Flurry of Blades or just Flurry, and the Decisive Move.

Steps
When a challenge to a duel is issued and then accepted, a duel begins with the Flurry of Blades:

Count the Hits and then proceed to the Decisive Move:

Tally the Hits; the player with the most Hits wins the Bout.

A Few Notes
All Abstract: The Flurry and Decisive Move represents a cinematic style of dueling, where blows are traded with speed and precision. The dice and the Hits scored do not represent individual strikes or damage dealt. Instead, they represent one duelist gaining the upper hand in some way before making a decisive move to win the bout.

How Many Bouts?: Depends entirely on the needs of the GM/encounter, though maybe 3 to 5 bouts should be okay for those 2-out-of-3 or 3-out-of-5 situations.

Dealing Damage: If needed, the winner of a bout rolls Weapon Effort to deal damage. Or damage can be the positive-sum between Hits. Or you can simply have the winner of the duel do a coup-de-grace against their helpless opponent.

Low Noble Karto, disgusted by the presence of dirty adventurers at his birthday party, challenges Garth the Fighter to a duel. With no choice but to accept, Garth readies his weapon as Karto shows a sadistic glee.

Karto attempts a sneaky trip against Garth, but the fighter deftly hops over the sweep and smashes his pommel against the noble’s face. Knocked senseless, the noble found himself sprawled across the tiled floor like a rug. The room goes quiet, and all eyes go from defeated Karto to the victorious Garth.

“Oh no,” sighed the rest of Garth’s fellow adventurers.

Let me know what you guys think. I have yet to use this in my game to test it, so it may seem wonky in some ways.

I’m guessing that if both “Decisive move” chosen (eg. two grapples) are the same neither gets the bonus hit? I like it, it seems fun and useful.

If you haven’t yet, check out Torchbearer or Burning Wheel for other examples or inspiration of setting up Rock-Paper-Scissors conflict mechanics. I like the idea of a system that can handle social encounters between snobbish nobles as well as orcs bashing characters with clubs.

The 3d6 to determine a number of hits, criticals, and fumbles is interesting!

I like generic names like “The Flurry” versus “Flurry of Blades” if the goal is to let the system handle both the sword duel between Montoya and Westley AND the poison cup match of wits between Westly and Vizzini.

I think its quite possible the decisive move (worth 2 points) will be entirely unnecessary in some cases. If one player rolls well (an 18) and the other player rolls terribly (a 3) there’s no decisive blow that could swing the bout. I’d consider your goals and whether that’s a feature or a bug.

Do hits reset between bouts if more than bout is called for?

Correct, no one gets a bonus Hit.

Though I had initially thought of adding some kind of draw breaker, such as 'character with the highest strength wins a Grapple draw. But I felt it was an unnecessary thing in the end.

Thank you, I shall look into those games later in the day, would definitely want to expand or find new ways to use Rock-Paper-Scissors. Always felt it could add some kind of uncertainty to a mini-game.

And you’re correct, there will be cases when a decisive move will be unnecessary, and the GM can always skip that phase of the Bout. Maybe after I get a chance to use this at my table, I can make some changes to the rules.

And yes, Hits do reset after each Bout (I’ll add that to the rules later). The Hits represent a character’s upper-handedness (or even the lack of it) in the duel. The more Hits scored, the better their advantage that leads to a decisive move.

The reset is that pause in the fight as each participant catches their breath or when one runs to find a better spot to fight on and the other chases (something like what Jack does during his fight with Barbossa in ‘Curse of the Black Pearl’).

Next thought - again, depending on your goals either a feature or a bug, up to you - if each character rolls 3d6 to determine initial hits, this is a universal system that does not try to simulate one character’s advantage over another in the duel.

Benefits to that approach could include that the system is siloed off from other game details making it easy to drop into any other system, universal regardless of what you drop it into. Its also highly consistent and easy to teach players because everyone is doing the same thing. Makes it faster at the table too!

If you wanted to say, “Hey, this character is a more skilled duelest and duels with an advantage,” a possible adjustment might be something like, you get a number of D6’s = some element of situational or character advantage.

For ICRPG this could be you get a relevant attribute as a number of D6’s or bonus D6’s. If it’s a pistol duel, maybe characters roll a number of D6’s = to their DEX bonus, or if it’s a logical argument, D6’s = to INT bonus, and so on.

I like that this can be settled pretty quick like a duel should, so I don’t think adding much to it would be necessary. Slippery slope being what it is I could see people then arguing that Con reduces a hit, Dex allows helps the deflect card and so on. Simple and clean is the best. That said, I could get behind what @Kotzsu said where an additional d6 could be merited in certain situations.

Son of a Swan (pardon my language). I did not think of that!

To be honest, I wasn’t truly sure how many dice to give as I wrote this mini-game down. I settled with three because it seemed like a good quantity of dice to roll (guess we can call it a bug then). But it never occurred to me to let a player roll xD6 where x = a stat. This is a great suggestion!

As for adding a D6 according to situations, that is also a great idea. Helps even the field a little against characters with higher stats/more dice to roll. And since there are more dice being rolled, I probably will have to limit the number of times Fumbles and Criticals grant bonuses.

Tested this out with some students today as a quick math game and they loved it! good job! 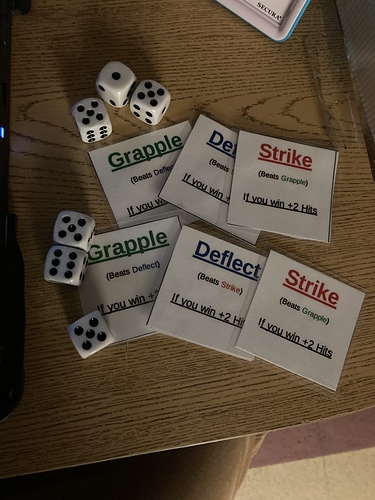 Goodness, my heart swells with joy, thank you for giving it a try, and I am glad you and your students enjoyed it!