Dive into Cyberpunk: Must you walk before you can Shadowrun?

writing a note to myself

Bring Bubblegum to a firefight with @Shadymutha…

Would you mind explaining the Sr6 fiasco?

@abodi
Well FIASCO may be the wrong use of the term… SR6e had some issues like spelling, missing rules, and just bad editing which frustrated me to no end upon the first read. Starting essence and unarmed strike are missing, for example. Cyberyes have limited capacity for enhancements but the essence cost is not in the book. Riggers need to flip thru various sections to check on all their rules. Why not just put that in the Riggers section??? … The collected tables at the back of the book are good, but the actions chart is missing details on what each action cost is!.. the list goes on and on… but it was not all bad…

I did like the fact that they changed Deckers/Technomancers to work in the same time/rounds/actions as the rest of the party. That was a huge improvement. But something a lot of people were already doing based on house rules adopted by the community anyway.

Ultimately I expected 6th edition to address the issues of the system as a whole. Less subsystems and more streamlined resolution mechanics. Which I think it tried to improve, but, it was more of a clean up 5th edition system with new art. … SR Anarchy was a good effort towards this streamlining of the system, in my humble opinion.

Every edition of the book gained about 100 pages, and they did trim 6e quite a bit, but I think it was missing some and kept some of the wrong content.

I have loved Shadowrun since 2nd Edition. It still has the same feeling and flavor in the latest edition (which is a good thing), but after so many editions and opportunities for improvements, I was expecting a more refined ecosystem of rules changes and updates to the overwhelming dice rolls that slowed the game versus improve it into a more modern version of a classic game… Hence my excitement for Altered State.

I even combined all of the previous SR 5e rules, charts, definition of terms, and some house rules written by the SR community for SR5e, into what i dubbed “Dunkelzahn’s Black Book” - just for use at my table game. Because it is that complicated and has over 1000 pages of rules/text over a dozen books… there are a plethora of notes in it now and it was a good reference. Until I had my light bulb moment of ‘just use the ICRPG rules for Shadowrun’… and the rest is history… my games have been faster, more enjoyable, and easier to manage… and it’s still smells like Shadowrun at the table, so I am lovin it… for now!

Sorry for the overly long rant/review of SR6e. I hope it sheds some clarity. I may be a little overly critical about the whole thing.

Yes thank you, appreciate the context

I’d also add in reading up on Underground.

Technically, it’s not a cyberpunk story (it’s an actual stand alone rpg based on Mayfair’s DC Heroes engine) but there’s plenty of dystopian techie goodness, swirled in with a heapin of black humor. It’s VERY Aeon Flux (I think the main artist might even be the same guy).

The world of Underground is one of the best & most unique settings that popped up in the 90s. A personal favorite of mine & worth reading up on.

Pretty sure it’s there.

Yes it’s there but in PDF format only 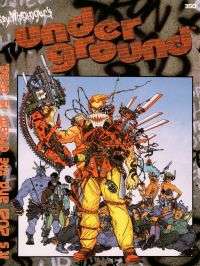 2021 - Peace or Pieces? Paraguay was bad, but nothing could have prepared you for Los Angeles. Back in the jungle it wa

Sorry for recapping a past thread, but thought this yet to be realized series, pretty solid as to how cyberpunk came to be in the zeitgeist.