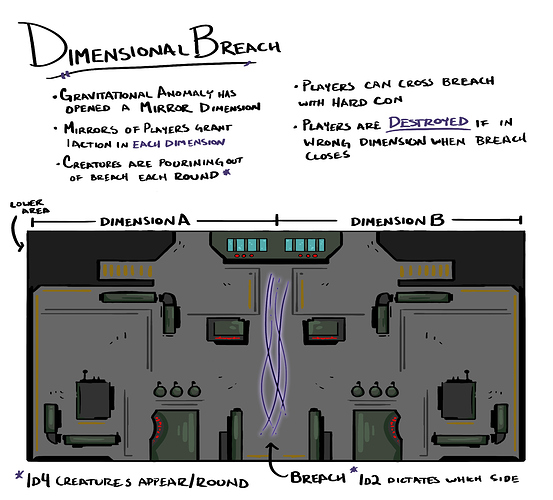 The Dimensional Breach is an encounter centered around a gravitational anomaly. Upon locating the anomaly, it is found that a Mirror Dimension can be accessed and players find themselves with mirrored versions of themselves with the same gear and same objective. Their objective is to defend and closes this breach from waves of creatures come in from the other side.

The thought is that as creatures spill into either dimension (using a Binary die or coin) that players can take an action with both versions of their character. Additionally, if one side gets overloaded with creatures, players can jump back and forth between dimensions with a HARD CON roll, but if the breach closes and a player is in the wrong dimension, that version is utterly destroyed.

That’s a cool concept! Do monsters spill on both sides of the breach or only one side?

It would depend on the binary die or coin which side the monster spawn into each round but you certainly could have them spawn in both at the same time.

I left it to the dice because I wanted their to be a possiblity one side would get overloaded and there would be a need for players to cross back and forth between dimensions.

How/When does the breach close?

Not entirely sure. With these doodles I’ve been trying to leave a lot of wiggle room in case some one uses it.

How would you close it?

Honestly i’m not sure and graphically it didn’t really prompt any thoughts either. it seems like a rip in the fabric and i’m not sure how you could fix such a thing.

If it is the result of a device, i’m not sure it’s much of encounter because you just turn it off.

No worries. I was imagining that this anomaly had been tracked to its source and a team was sent to close it with a device without a lot of knowledge of what the anomaly was or what danger it was causing.

Mechanically speaking, it would probably be a set number of rounds/effort that would need to be reached