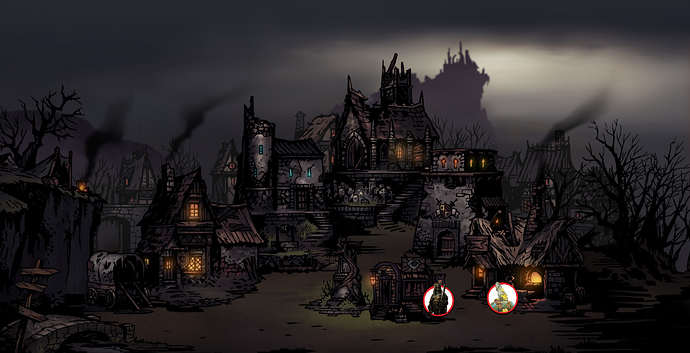 I really like Darkest Dungeon. I like the art direction, the JRPG-inspired gameplay, the dungeoncrawling and the “adventure” being divided into different phases of play (which some say reminds them of Torchbearer).
Before going all-in though and scaring my rules-light-loving friends away, I only tried to implement two mechanics from the game, to see if and how they would work: stress and torches.
The stress mechanic was something I blatantly ripped off from a game I played with @glocke where my character Dr. Robert Glancy, a chain-smoking FBI-psychologist, nearly died of a heart attack.
The torch mechanic was something I wanted to test, to see how easy it would be to integrate some light (pun intended) ressource management into the game. Playing in turns is crucial for this mechanic to work as smoothly as it did.

Stress-mechanic
The TARGET equals the player’s stress. The TARGET starts at 10. Whenever a player gets into a stressful situation, they roll a CHA-check vs. TARGET. If they fail they raise the target by a certain number (sometimes 1 point, sometimes more depending on what caused the stress). Calming yourself down to reduce stress and thereby the target, takes a WIS-roll against the TARGET to “heal” stress by WIS+1 with 10 being the baseline.

Torch-mechanic
Dungeons are dark and torches are needed to see and not suffer stress.
1 inventory slot = 5 torches. A player has to spend 1 action to light a torch, which lasts for D6 rounds (I was thinking of only making it D4, but D6 makes more sense, because I understand torches as TOOLS). Every turn a torch is not lit, every player suffers 1 stress (raising their TARGET).

Darkest Dungeon lends itself to a Dungeoncrawl quite well, I think, so prep is really easy, because you can plan your “dungeon rooms” as separate scenes with stuff in them that player’s can interact with.
Instead of planning encounters, I just prep monsters and decide for every scene if there are monsters or not (by rolling the skull dice; skull = monsters, no skull = no monsters). If you borrow the structure of The Grind from Torchbearer you can even have a “town phase” (stocking up on torches, weapons, rations etc.), a “dungeon phase” (exploring, fighting, looting) and a “camp phase” (where players can rest, eat, regenerate HP or stress). If you wanted to make the game crunchier, you could integrate mechanics for rations (5 rations = 1 inventory slot, eat 1 ration after 6 rounds or something like that), rules and feats for camping and expand on the stress mechanics by giving players quirks as a result of reaching 20 stress.

Anyway: I did some Darkest Dungeon monsters using the TIER-system in ICME, which I wanted to share with you. Since this post is already very long, I am going to do a separate post that only contains tokens and stats for the monsters I threw at my players. Thanks for reading and take care, all!

darkest dungeon is one of my favorites and thought ICRPG would play well with it. I could totally see implementing the characters as classes! Question; does each person have their own separate target or is it shared?

If you play with the above stress mechanic, each player has their own separate target, which starts at 10.
When I played with two of my friends, they rolled pretty good so the target was pretty low. One had to beat a 12 and the other one hade to beat a 10.

that is a very cool way of using the target number! this is the stuff I like to see, thanks for sharing!!

I love that stress system with the room target, soooooo stealing that next time i do a grim dark setting

To give you a bigger picture: here are my own reasons, why I don’t like my own stress mechanic anymore after GMing the oneshot (which @kagozaiku mentioned):

But it was fun

It won’t take up any screen space

I do think that would be a super cool mechanic for a particular dungeon or room. Like it sounds very complicated to me, for general use, but as a mechanic to reinforce a certain narrative feel I think it would be awesome.

I do almost exclusively player-facing rolls. On the rare occasion that I make a monster roll, I usually have them roll under the room target. I think with this system I would just have monsters roll against 10 and add their bonuses. Maybe the heroes can raise the monster’s target by killing other monsters or lighting torches?

What I did for my Darkest Dungeon-setting was to take only the stress mechanic.
I still rolled for the monsters to hit against the player’s DEF. The only thing that changed was the player’s TARGET. Since I wanted to mimic the feel of Darkest Dungeon part of the game is all about having the right amount of items at your disposal to best whatever the dungeon throws at you.
That’s why I put holy water into treasure chests, which cures stress. Holy water would also be something you could buy in the hamlet, so if you go into a dungeon you have to prepare and consider which things to take with you.
If I get around to think up a camping mechanic, this will be another way to relieve stress while in the dungeon to counterbalance the possibly ever-increasing TARGET.