I was thinking that ICRPG could be converted to just d6s. Some rolls would be a bit complicated, but here are my ideas:

Having the effort just be a d6+x makes the rolling simpler and quicker. If you need a full range of 1d4, 1d8, 1d10, 1d12 for the tables and such then you can use the following. Each result should have an equal probability:

This is a little more complicated than I originally thought it would be. Just thought I’d throw it out there.

This is a little more complicated than I originally thought it would be. Just thought I’d throw it out there.

It is a little more complicated if you keep the idea of two rolls. Consider the idea of one roll resolution. You roll 3d6 to take an action and do not roll separately for effort.

You then apply your effort modifier to which ever dice you pick. This means a high attempt roll is more likely to result in a high effort result. Now, this does mean you can roll something like 1,6,6 on a basic effort action and it can be kind of a letdown. If you want to avoid this, you could also say every 6 gives you +1 effort. So, even if you roll 1,6,6 you still get 3.

On the upside, this system opens up a lot of dice pool manipulation mechanic. For example, stress dice similar to the most recent alien RPG. I am thinking they are extra d6 added to the roll and you take the top 3 dice to check vs the target, but perhaps you have to take the stress dice when calculating effort? Adrenaline can push a character beyond what is typical, but the results become more random the less calm they are.

On the downside, this kind of rolling has completely different probability distributions that I have not even thought about the implications. So use this at your own peril. It just strikes me that this type of rolling could help tell the story, but avoids the numberless narrative dice that I do not enjoy.

Yes, it’s bad enough to roll a 1. A 0 would be even more frustrating.

ICRPG already has separate attempt and effort rolls so I don’t think that part is too complicated.

However, this is an interesting idea. It will definitely skew the effort averages. 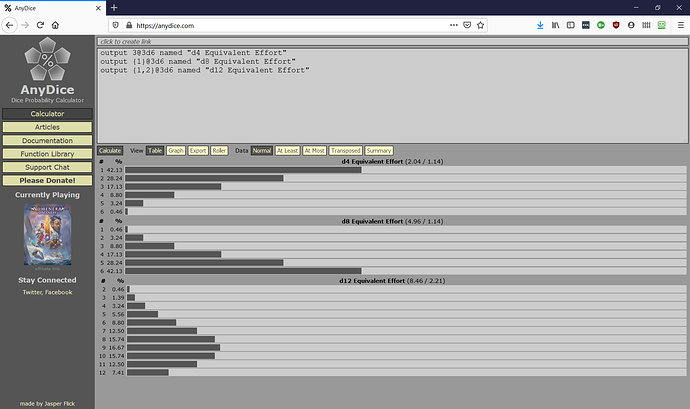 Keep in mind to keep things intuitive and easy for players to grasp. Nothing like finicky maths to slow turns and tune down the immersion IMO. I’m guessing you are doing this for situations where a table doesn’t have access to the weird dice?
You will never perfectly simulate the d4-d12 range, except with finicky maths. A possible streamliner:

Here’s a few thoughts I’ve mulled around in my noggin about this stuff:

Hope this gave you a gem or two you’d like to pilfer.

Yeah, my thought was the case where you didn’t have polyhedral dice. Also, I like the bell curve.

The free effort you mention is basically what I proposed.

The d4-d12 equivalent rolls are more for the GM in my mind. There are some tables in the book (like the L.O.G tables) that are designed for the polyhedral dice.

Players would mostly just use the 3d6 for Attempts and the d6 variants for effort.

Thanks for the ideas! I’ll have to mull on them a bit.

But some posts I reply to are deleted so it’s no longer simple to follow.

I still love dice pools and if I ever make a complete game TTRPG from scratch it’ll have D6 pools just because they are fun.

I’d probably do 3 stats, purchased abilities/powers, and a skill point per milestone.

As to ICRPG conversation.
All stat rolls start at 3d6 easy is +1 die hard is -1
Starting stat build points is 3~5 points…these add a die to the roll so depending on the power dynamics you want, 3 is fine for most games.

And in keeping with the D6 theme, hearts = 6

Problem with this mechanic, Maths…need to add up the roll, and need to count up the hits. But for the most part it would play off of ICRPG sheets, but the feel is different.

Reason critical success is not needed, a roll of 2 6s with 3 dice is minimum 4 damage. And if using hearts = 6…it’s a big hit…if you add a crit die (D6 to effort) it becomes overkill. But you might want to track for progression.

Now since effort is changed to based off of action roll results, have the effort mean what it is, no tools, tool, ranged, magic.

Anyway there is something more to think on. :-p

Yea agree with Pax and inmatarian, if you’re going to go only d6 - go hard for that hawt dice pooling satisfaction!

Maybe the heavy maths can be solved by tinyRPG/MouseGuard approach of counting 5/6 as successes. TN = number of successes needed.

Maybe this is too far from ICRPG though. Up to you, innit.

You could even count 3/4s as partial success if you want to chuck in some DungeonWorld as well xD (ok I’m loosing control. RESPECT BOUNDARIES?!???)

High TNs like 24 can equal the satisfaction…also mechanically force players to specialize their characters.

Where it gets interesting is with TN 18…allowing only extra effort to equal damage. So after a TN of 18 any extra dice do damage straight.

Making magic ignore armor or -6 TN but cost 2 HP per dice rolled…things get interesting for players…when to use magic?

In reality there is a lot of choices in this space and it is up to the creator to negotiate it.

I don’t think you really need to do anything funky with the effort dice. Between a d6 and a d8, the difference is not huge, you could easily have weapon and magical efforts both use a d6, even the basic effort could be a d6, depending on how you run your games. The ultimate effort die can easily be 2d6. If you run with the gunpowder effort, you only have to choose how the d10 is converted, either 1d6 with powerful bonuses like double damage or 2d6 with tuned down additionnal effects.

Having attributes much higher than the average might be an issue balance-wise, you might want to limit how much PCs can invest in a single attribute at character creation. Also, to compensate for how stronger a good defence became, you might want to find an easy way to score a guaranteed hit, IE a double 6 (roughly 1/14) is a critical hit. Easy and hard checks can simply be a 4d6 roll droping either the lowest or the highest.