Creating a world... together

Long ago, I think I brought this up and I wish to bring it up again (again that is if I actually did bring this up before - if not… this is the first time. lol)

We have a lot of very talented folks here… so many so that even though I run a modified hack system that more resembles 5e than any other system… so many of my idea’s have come from you guys. This is a fantastic place for resource.

In essence… this would be a massive resource for people to grab and insert into their game at their table. Plug and play if you will. Too many GM’s get caught up in drawing a map then they put names of places on the maps and then they run into the problem when the players say they want to go to Rivendell and the GM has only made three of the locations on the map so far and Rivendell isn’t one of them. Panic stations!! But, as GM… you can tell the players via an npc that there is a town just over the ridge called spider mountain called XXXX and you pick one from the list one of you has created and the GM is ready to go with a town and has loads of npc’s and shops to insert into the town.

So… who would be down to start this kind of project? If so, below simply start your reply with something like TOWN OF MONTENGARDE and then make your creation in that post. The first few lines should be a brief and to the point summary of the town so a potential GM can quickly scan and see if thats what they need for their game. After your summary, you go to town (no pun intended) making it. Don’t bother inserting shops in your post. Make a new post for those. You could insert ADVENTURE IDEAS at the bottom with hooks to inspire the GM who might use your creation.

The town of LongShadow. Walled city with tall black stone obelisk at its center. On the summer soltice, the evening sun has a long sword -shaped shadow cast across it with the tip landing on a temple belonging to a religious warrior cult. The initiates are taken to an underground complex where they are trained and only emerge on this day. “Born back into the world” only to see its failing light. Prayer vigil all night then begin their “mission” at the rising sun.

Your party is hired to escort a new “brother” to (some location)
I know, the time is very specific on this one. Sorry

The underground stone gates of a fortress-village of Rat-folk living in the caverns under the mountain.

Love this idea, can’t wait to see this list grow.

Xedos
Trade city at the edge of an empire, sitting at the crossroads of ancient trade routes, at the fall line of a great river, the doorway to the sea, and in the shadow of the holy Mount Aerarak.

A large desert that is difficult to navigate due to the fact it seems to change its topography more quickly than a normal desert. The Hardy people of the desert are known for trade and survival.

*giant centipedes stalk below the surface of the sand
*sand storms sweep away caravans trying to cross the desert
*ruins of lost civilisations dwell below the surface.
*giant flying predatory creatures patrol the skies.
*springs and oasis are more common than an average desert, rumours of a druid goddess come along with this knowledge

This is a brilliant idea, will try not to flood the thread with everything I think of lol

The Green Arrow. Selling bows and arrows. Some magical (arrows only)
Owned and operated by Larsyn Woodborn, Elf, Female.

Larsyn is a small sized young Elf who has a non-binary type air to her. Some often think she is a he and call her “sir” or “him” but it matters not to her. She does not care about such things. Her life is dedicated only to serving her true love, a secret love. Deep in the woods, several times a week Larsyn heads into the forest and with her skills in sneaking and passing without a trace, none have ever been able to follow her. Once she reaches her destination, she meets her love. An unreciprocated love however.

An older female druid Elf and an elder green dragon who live together in a hidden grotto of great beauty. There is a small lake fed by a series of tiny streams and a tiny waterfall. All around it is thick with flora and fauna. A tiny cabin sits deep into a hillside and heavily overgrown with flora. It is easy to miss unless you are looking carefully to see it. To even find your way into this hidden grotto is a challenge as it is so thick with flora and heavily protected by bramble thorn bushes which stand upwards of 20 feet high in most places. (Bramble thorns are up to 6" in length and will tear your clothing and skin easily. The toxins from them left on your skin can cause you to hallucinate for hours and you lose 1hp per injury from each thorn).

The combined magics of the elder dragon and the druid master are merged to craft a few (often 3 to 5) magical arrows for Larsyn to sell in her shop and in exchange, Larsyn gives all her profits to them (which is mostly for the dragons horde). It’s a complicated dynamic this relationship between the three but it works. Larsyn returns each day to open shop and sometimes with new magical arrows in hand which sell for a hefty sum. 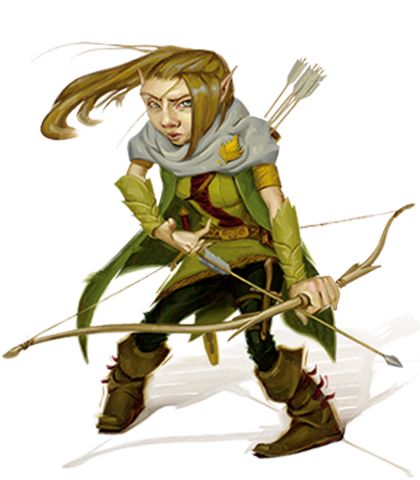