I agree with you. But would my player agree, after he invested 2 points into melee damage bonus ?

We will need to remove that option completely. ( fine by me though )

Effort still exists. But it’s not really significant for combat.

Or go with a hybrid method. Boss fights to 20hp~30hp at TN 18 are much more dramatic than 6 wounds. Specially when recovery, life steal is involved, health potions are involved.

DPS or DPR (damage per round) looses its significance, but the hard alpha strike (hit them with your most powerful strike first) capabilities don’t.

This also presents fun capabilities like spell scrolls and other consumables that can do damage to large groups of foes…but not work so well during boss fights.

You can say that 4 hits translates to 4D6 or that it’s not meant to be used on HP monsters. I have not really seen what people would do in those situations, since I use hits/mook rules for large encounters.

However, don’t mix one with the other during the same combat.

But A 3 Hit monster is basically a 10 HP monster. And At the end of a battle, though, it all events out. Rolled a 2, rolled a 6, rolled a 1, whatever. Add your modifier. It’s still not that different or outcome changing tracking HPs vs Hits.

In the end, it comes down to the narrative effect a Hit has.

Do players know how many HP the monster has anyway?

Many players take the average for their HP increase when bumping up levels. DMs do average monster damage rather than roll.

Whichever method, it all averages out. With that view, Players will want to put Points towards consistency rather than spike. It’s all a numbers shuffle

I prefer this method because I’m running a group of 6 people brand new to RPGs. It speeds the game considerably.

You may have read this already…

Do players know how many HP the monster has anyway?

In the case of ICRPG if a monster didn’t die on 10 damage but then did die on hit 3 which was 14 total, yeah they are going to know you are counting funny.

This system does work much better if the hit points of monsters are less discreet ala 5e.

Great link! Thanks for sharing that!

To know you are counting funny.

@Twotricks
To answer what you said about having to translate all the monsters in the module. You don’t really.
Like Alex showed it can be real easy.
What I’ve been doing is using the enemy “levels” in MAGIC and adding a cool ability or two.
That and using CORE monsters with small variations. Like making an Ogre into a Fire Giant, Flying Brain into a powerful psi-user or a Eye Beast into the Eye of Omega.

I’ve not seen that article before but it definitely complements the 16HP dragon philosophy. Thanks for linking.

Yes, this is a great article, thanks for sharing it!

Hey TT,
As DM running Borderlands and Barrowmaze, As mentioned above I suspect you’re way over thinking it. That is good because it shows you really do care and you want to run a great game and you want your players to have fun.
My advice is to run one heart monsters and minions; monsters with just one hit point. Two heart monsters for Lieutenants and three hearts for big bad evil guys.
For skeletons, give them two actions but fall apart at one hit. Give them +1 to hit. This lets you describe and play out a quick but fragile enemy. Your players actions will reinforce this narrative.
For zombies, they get one action; move or attack. Maybe give them +1 effort. They get one heart because they are tough. This reinforces the narrative again: tough, slow and plodding.
The owlbear is one of my favorites! This gets a bite, claw and claw attack. Make the bite do basic effort, but if a player gets hit with both claws, they get hugged, doing weapon plus ultimate. I love the idea of a screech attack! This beast needs a +3 or +4 to attack and probably three hearts. This should scare the holy schnikes out of the players.
The Gnoll is a neat monster. I remember reading 3.X supplement that boiled them down to vicious, lazy and cruel to a fault. I would give them two actions, Probably +2 to hit and one heart. I loved a gnoll ranger ("I wanna be a gnollish ranger. live a life of guts and danger…) in the D&D miniature game and the gnoll cleric is a staple of D&D. I would definitely give them an gnoll with archer attacks and loot as well as a priest that causes the players grief.
Hope this helps, sorry it took me so long to respond.

Here’s an example of some Wraith’s I made for my game, converted them by taking ideas from Pathfinder 2e and D&D 4e/5e. Hope it helps. BTW, you can print these and paste them to a 5x8 index card. 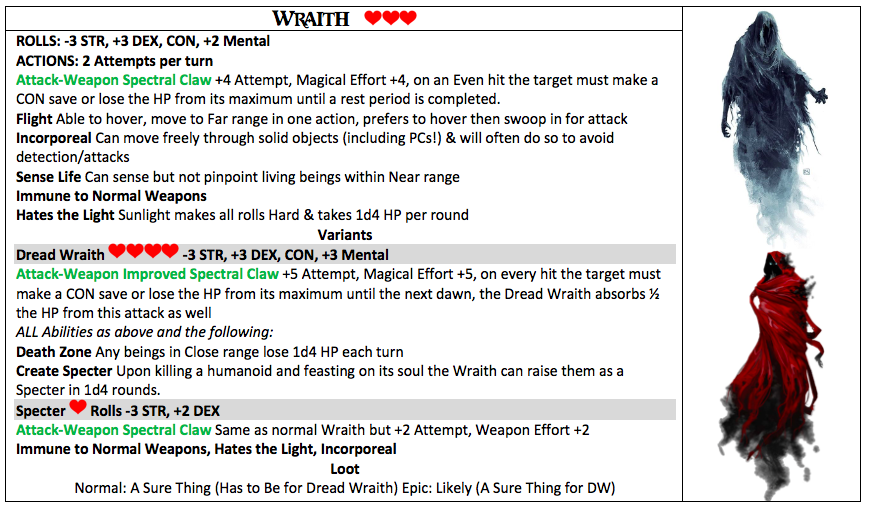 Here’s some Orcs I threw together the same way. I have been having a lot of fun stripping down and converting monsters for my campaign. I have more I will share if you’d like. 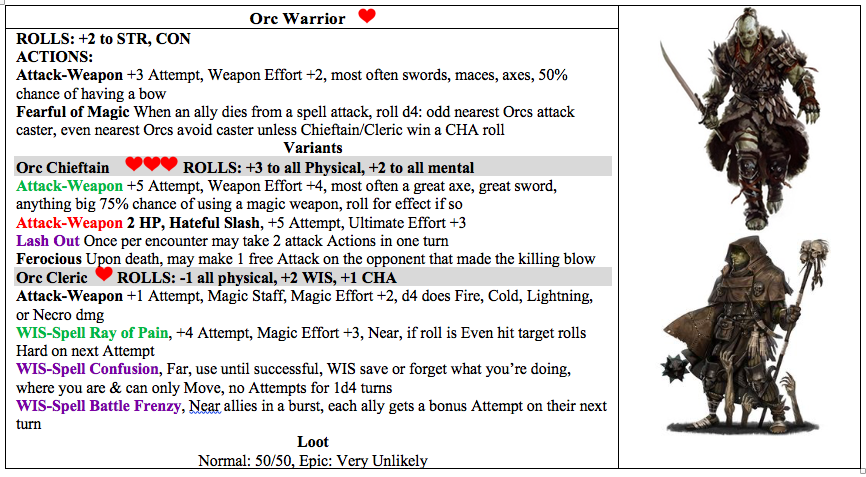 I steal a lot form 4e because it translates well to ICRPG mechanics. Purple indicates things that a monster can only do once, red is an attempt that requires them to sacrifice some HP, usually 2, and green are attempts they can take at will.

Was this what you remember?

I took a copy from the old Google+ before it got closed down. There isn’t a credit in the document as to who did it…?

This has been incorporated into ezzerharden’s ‘incomplete collected works vol2’

Sorry to resurrect an old post but with the advent of how monsters are quickly converted from 5e (use the CR for hearts/ Stats) has the conversation here changed at all? Would there be a similar way to convert old modules monsters?

I am reading through “The Lost Caverns of Tsojcanth” and I’m hoping to find a quick way to convert the army’s and such found throughout the text. With AC 1 being the total opposite of what it means now and no CR I’d like to find a way to keep them balanced but still have their intended “feel”

As an aside; I have no issues winging it and doing rough translations, that is fine, but I would love a way that is as quick and handy as the CR conversion hack that I can do at a glance. If not, I’m fine doing it the old way.

Thank you all in advance.

If you have access to the Master Edition on pages 144-145 (at least the copy I have), there is a matrix/simple guidelines for creating and converting monsters. Might be worth a peek.

I am waiting for the PDF to drop but I will be getting it. I will check that out for sure! Thank you!