Can any one please clarify the Resurection power

With a Hadr attempt, rairse your effort output in HP per day, target rises when full. 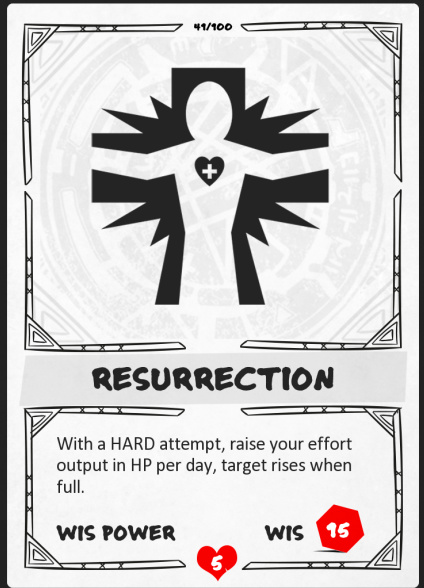 What does it mean raise effort output in HP per day? Do you keep healing a dead target to full HP (Hearts) and they pop back up alive? Kind of confuse…

Hej @Jhyarelle. The wording on the card you attached is indeed confusing.
I am not sure which editon of ICRPG it is referring to (if any) but the things I could find searching ICRPG Core 2E and the recent ICRPG Master Edition for the word “Resurrection” are the following.

In ICRPG Core 2E “Resurrection” is part of the ANCIENT LOOT table on page 198.
There it says:

WIS Power, HARD roll, In 4 ROUNDS a deceased target you touch will live again with 1 HP

In the ICRPG Master Edition “Resurrection” is part of the ANCIENT LOOT table on page 384 and is listed as a WIS spell not a WIS power. Apart from that the text reads the same.

That looks like a something pulled from Card Forge which, if I remember correctly, was developed during the 1st Edition of ICRPG. If it were me, I would refer to the CORE or Master Edition of the spell since it is much clearer.

Yeah. That card is not an official product.

Others have already suggested you use the newer versions of the power, but for the sake of clarity I’ll try to answer the original question.

On the card, the WIS 15 on the bottom right is the Target (15) and the ability used for the checks (WIS).

Each day the cleric/user of the power rolls WIS. If successful, you roll Magic Effort. The creature is revived when you accumulate Effort equal to its HP.

For example, I’m trying to revive a creature with 10 HP max. I roll WIS and succeed on the first day; I roll Magic Effort (for example, 1d8+1) and get a 7. The next day I roll again and fail. No effort that day. On the third day I succeed and roll effort getting a 3. My total effort equals the creature’s HP, so it’s revived.

Anyway, the newer versions ARE more clear but I also like this “ritual” power.

Thanks for all the answers, they were all very helpfull. I’ve recently got into ICRGP and its simplicity in its mechanics while maintaining a narrative makes gaming with it fun. By streamlining the mechanics and specialy the math you can get deeper into the games lore and characters. It reminds me of Big Eyes Small Mouth (BESM anime RPG) in a D20 setting. Its familliar and modular enough fit into anything you to play in or as and runnig it is a breeze as once you the core system, you can prep and play in minutes. Totaly amazing for on the fly gaming.