BladeRunner Hack and it's Character sheet for EZD6

I’m in the making of a BladeRunner hack for EZD6 based on Free League’s BladeRunner RPG (https://freeleaguepublishing.com/en/games/blade-runner).
The reason is:

I thought I share it with you, maybe for some inspiration and feedback. I share my Character sheet for it also. Where I use exactly the same rules from the RPG, I write “Same as in the BR RPG Book”, if you are interested, please buy the book.

With only 3 new mechanic from BR RPG, we are able to handle the BladeRunner mood and setting: 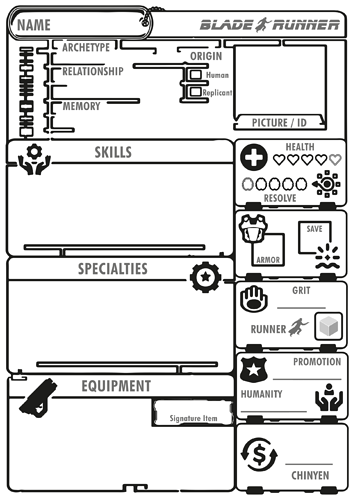 And now, the setting mechanics going through the sheet:

Promotion and Humanity act as experience points, as milestones of character progress:

Chase similar as the Book
Use the Maneuvers rules from the Book, go with oppoesed Drving Skill checks.

The Test is an Insight check which gets:

And last but not least here is a random character: 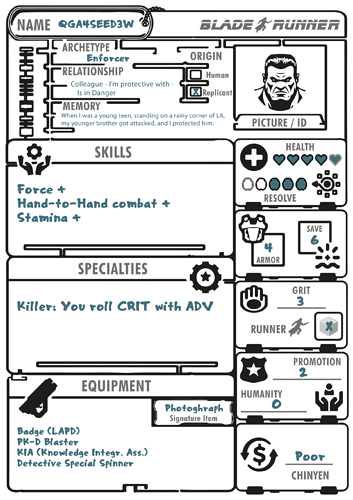 If you have any comments or suggestions feel free to share.

This looks awesome! Do you have any plans to publish more formally at some point?

What do you think under ‘publish it more formally’? ( e.g. after playtested it more, do I do a cleaner, edited .pdf and publish it here? )

A cleaner/edited PDF would be awesome! I don’t pretend to know what the best ways to publish that would be, but I would totally put up a few bucks toward that kind of effort.

I think I don’t have the knowledge nor the skill or the copyright to public it to DriveThru or different forum. I think your best shot is the Blade Runner RPG book from FreeLeague (link in the post), and apply some mechanict to your game.