So yesterday, @Ezzerharden ran myself, @rudedd, and @skippy, through a Search and Rescue mission in the Bearcats world (I apologize if I get any of these details wrong). We were coming in as a search party from a nearby settlement to locate survivors and get them to the extraction point. The intel we were provided said that they would be somewhere in the forest, and that the city was overrun with Tanks and Spyders…things weren’t looking good. Skippy played Mo, the mechanic and our leader. Rudedd played ATOM, a rebel AI mech, and I was playing Jack the Kid, an excited Freshman.

Having a modified jeep, we decided to take things offroad instead of going through town. We thought making a beeline for the high school would be the fastest way through. Soon enough we arrived at an old farm that seemed to have seen a little too much laser fire and as we investigated, we had our first run in with a Tank. Thankfully, we all had cloakers and ATOM was able to convince it that it was still on the INVADERS side.

Continuing on, we moved further south but another Tank showed up. Again, stealth and restraint kept us from engaging directly and allowed the Tank to move away as it patrolled the area. Unfortunately, as we were making our approach to the river, the first Tank returned on patrol and spotted Mo and fired. The shot blasted Mo and took off the corner of one of the houses that Jack was investigating. In a quick response, Mo let off his Garage Built RPG and blew the tank to pieces.

The fight doesn’t end there though. Along the river, a tank appears from the southwest, attracted by the noise. Firing an array of plasma bolts at Jack who had jumped ahead, it hoped to eliminate the intruding boy, but thankfully Jack was just too small of a target at that moment. Mo quickly responded with a shot from his sniper rifle and popped the top right off the tank, bringing it down in a spurt of green goo.

In a brief respite from the fighting, Jack used his Jet Repulsor to blast off to the other side of the river in hopes of finding better cover, but as he does so a Spyder appeared and let out a barrage of bullets, hitting each character for 5 damage. This hurt for ATOM and JACK, but it was another to drop Mo who had already taken on a Tank’s cannon earlier. To make matters worse, another tank approached along the river, but this time it was tracking Jack. Before Jack could get away, he was already trapped in the Tank’s gravity cannon. A sitting duck.

ATOM and Mo weren’t faring much better as the ATOM tried to destroy the Spyder watching them from the top of the building with his Magnet Gun, but as fate would have it, he ran out of slugs with a criticial fail… the magnet gun was now useless. This gave the spyder time to lay into the pair in a barrage of gun fire, dropping ATOM.

Stuck in the gravity field, Jack could only watch as the Spyder retreated, presuming that its targets had been neutralized and as the Tank holding him in place, brought its main cannon around. In desperation, Jack reached into his satchel and tossed a flare towards the Tank. What else could he do? For whatever reason, the Tank’s sensors were drawn to the flare and the shot intended for Jack went wide, giving Jack a little more time.

With the Spyder gone, ATOM’s back up generators flipped online (HERO COIN) and he was able to shake Mo back from the light at the end of the tunnel. He wasn’t going to let his friends die on him! Discarding the Magnet gun, ATOM pulls out his PC1 Prototype and prepares to fire. In a last-ditch effort, Jack activates his jet repulsors and all the strength he can muster to roll off the end of the river bank and fall into the surging current below, dodging another Tank Blast. As Jack is pulled downstream, ATOM blasts through the Tank with a hi-powered laser.

As we all take time to recover (Jack wrapping his butt with a towel after being pulled from the water, Mo taking a few doses of “medicine” called Jack Daniels, and ATOM working on pulling a battery pack from the Tank wreckage), a group of teens are spotted on the other side of the field along a row of trees, but before we can get to them, a Spyder shows up…

We watch, helplessly, as the Spyder mows down the group, killing all but one. In a moment of desperation, Jack rockets over to the teen and tries to pull him into the forest before another hailstorm arrives, but can’t quite make it. At the same time, ATOM picks up an alarm broadcast on his readout, indicating that more INVADERS will soon arrive. And in due time, a squad of Spyders arrive but are too far off for their guns to be of use… yet.

In a fit of revenge, Jack rushes the Spyder that mowed down the teens and uses and Arc Spear to short circuit the Spyder before impaling it with his spear, growing a few chest hairs in the process and earning the pride of ATOM and Mo, as they focus their fire on the approaching squad of Spyders who are quickly working their way to the bridge and towards the high school.

As our timer runs down, Mo directs Jack to throw down a few smoke bombs to signal an awaiting airship to come and pick up the survivors while also breaking the line of sight of the approaching Spyders. ATOM and Mo cover the awaiting group as the airship arrives. As the team lifts off, a huge skeletal INVADER breaks through the roof of the high school and roars as the airship flies off into the distance.

@Ezzerharden, @skippy, @rudedd, do you have anything to add? I know I missed quite a few details from the non-stop action haha.

Here are a few screenshots from the final moments of the adventure. 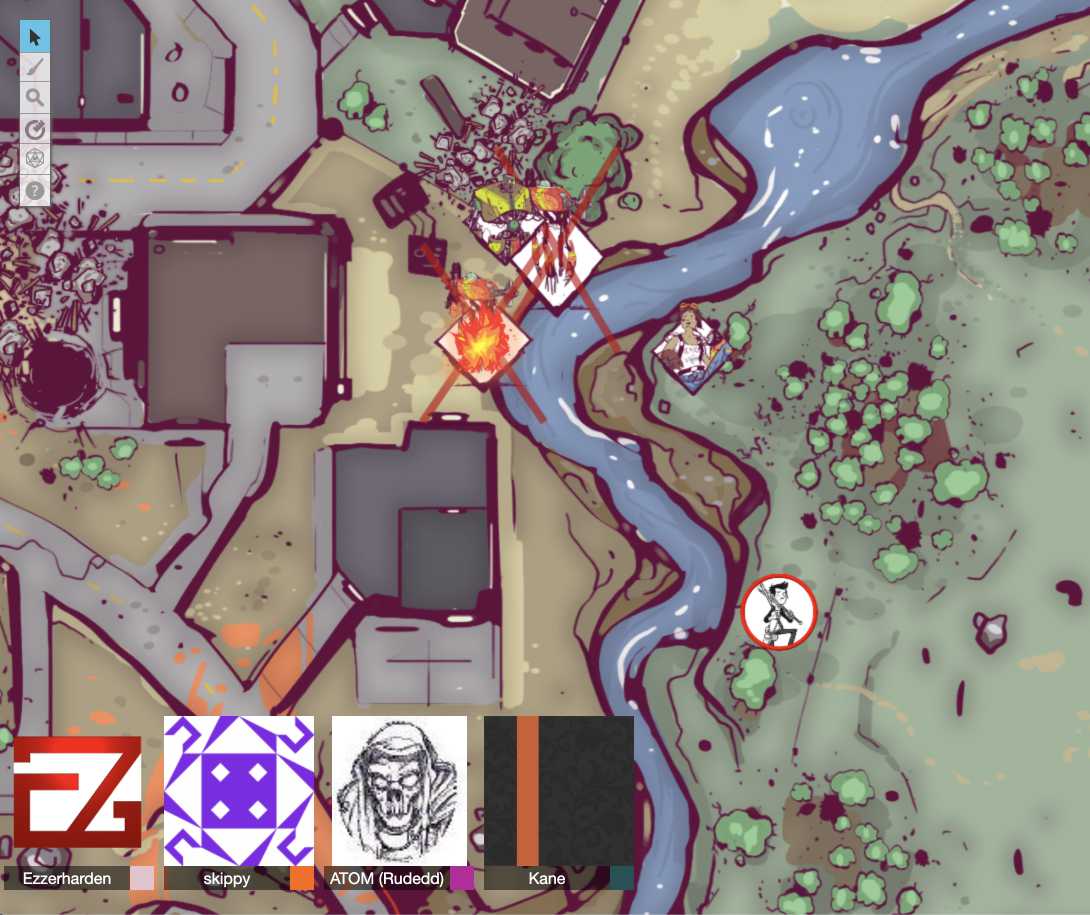 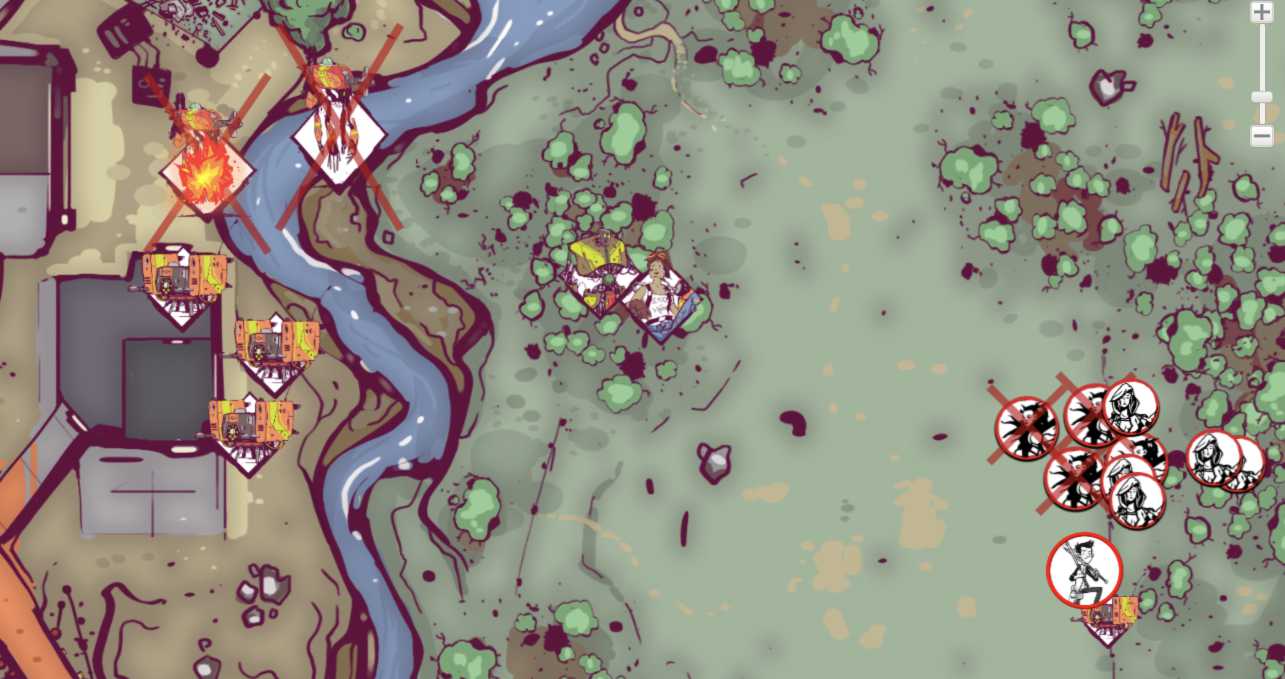 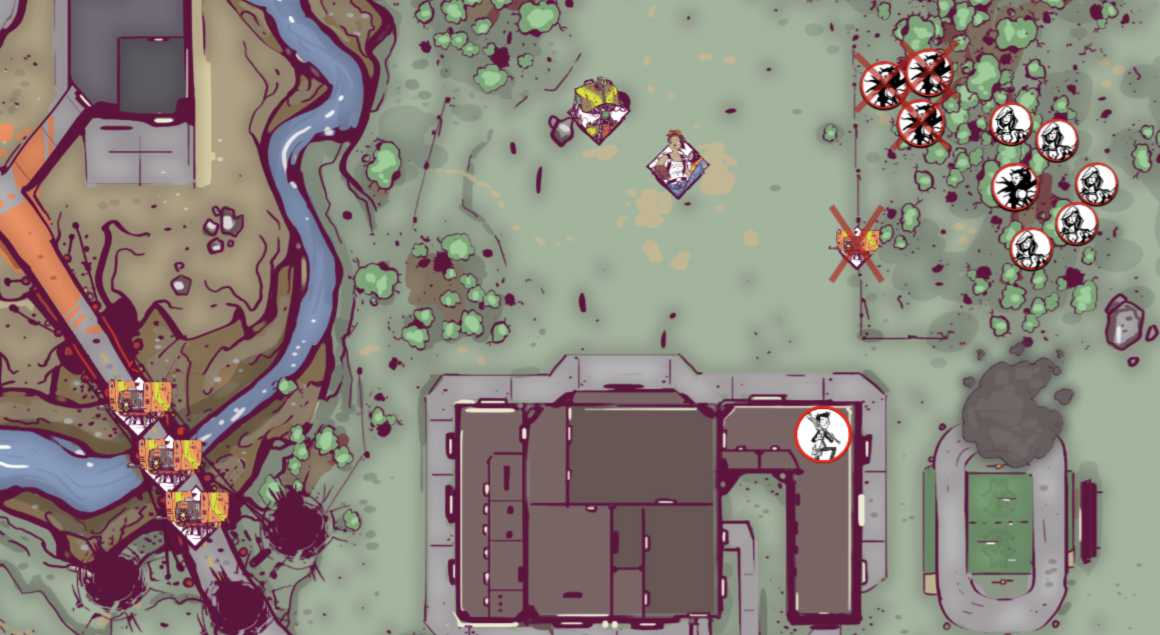 In summary, this adventure was an absolute blast! ICRPG fit really well with Bearcats and Ezzerharden really kept us on our toes throughout the whole thing. He kept to his oath and was truly a deadly GM, but that kept the tension and excitement high. As a team, everyone played well and we all had a role to fill. Mo was lead and supported, watching our backs and taking out several tanks. ATOM defended and protected, always on the lookout for survivors and kept the welfare of the team above his own safety. He was committed to not let anyone die on his watch. Jack the kid wasn’t the best at following orders and always rushing ahead, but ATOM and Mo always had his back.

Just wow. What a game!

I’d highly recommended anyone to try out Bearcats!!!

This was the first time I’ve had to be a player in ICRPG, after having been on the other side of the GM screen for quite a while. It was a real treat to watch @Ezzerharden run this, and I really enjoyed how much energy and passion he brought into the game. I particularly liked how he often replied to our descriptions of desired actions with “I understand” - it’s a small thing, but it was very affirming and kept us all engaged.

The party went in with only a loose plan, and even that fell apart after the first fight. We were split up, and then beaten down pretty fast. I thought I was going to be out of the game at several points, but ATOM really saved my bacon! The tension was palpable, which made the teamwork all the more satisfying.

Jack the kid was a delight to watch zoom over the map, and be a wildcard for our plans.

The mission was only a partial success, in that we didn’t save everyone. Damn those Spiders are nasty! Note to self: invest in some armor next time!

This was a great session, and a great introduction to both Bearcats and ICRPG!