Greetings, Shield Wall! Tomorrow kicks off my new Warp Shell campaign in which the PCs try to save the universe through nonviolence and medicine. I thought I’d share our work here. Let’s start with the opening encounter, Medevac. Feedback is welcome and feel free to use my ideas for your own game. Eventually, I plan to publish a full campaign booklet, complete with classes, LOOT, NPCs, and encounters. 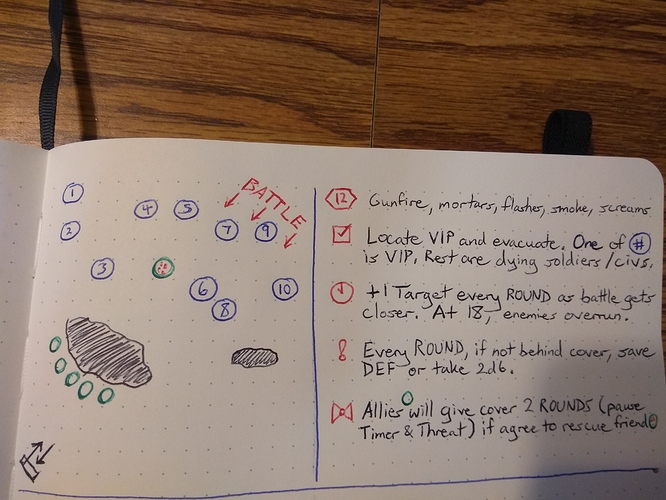 This looks great. What are the green circles? Was the battle literally advancing across the map (meaning persons 9 and 7 would be much more difficult to save) or was it more abstract?

The green circles are allies. The green circle with red dots is their friend. The enemy forces aren’t on the map yet, and won’t be until the Target hits 18, at which point, the area is overrun. Casualties 7 and 9 are no harder to get than 1, 4, and 5, as they are the farthest from cover.

Thank you for the reply. I was interested in the post about a non-violent campaign a while back (although I had nothing to contribute)

This looks great! Really excited to this coming to fruition for you, dude.

Looking forward to it.

Thanks, @JDStirling. I know some time ago you enjoyed my Paramedic class. Here’s the draft we’re playing with. I have a PC who’s a Ghost Armor Paramedic. FYI, I am playing with ICRPG noobs, so I selected their starting LOOT for them: 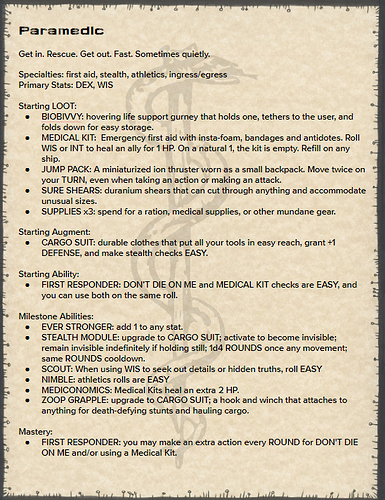 Neat!
Here are some additional ideas, which you may consider for this or similarly-themed encounters in the future.

CRAWLING DISARRAY: At the end of each round, all wounded soldiers moves 1d3 inches. Initially, each moves towards a randomly determined edge (1: North, 2: East, 3: South, 4: West), but this might change with obstruction, guidance, or coordination. A soldier who moves over the board edge is lost.

WRECKAGE: Instead of rocks, the cover is a damaged school bus (large) and jeep (small). Engines are dead, but you can push them with enough force.

Here is the “tank” class. One of my players is a Kitt Hygiean, and took the 5 HP deal 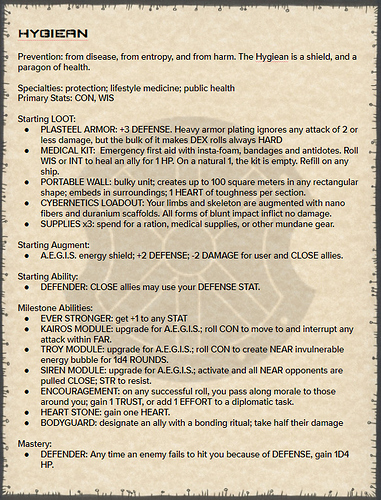 Mastery of Hygean seems OP unless they are temp HP. Or at least to make it clear. Or some time around session 31 they may have 180 HP.

Most of the rest is a bit OP, but they are a protector, not a damage dealer…yet in your game if you have 4 of these, you may need to adjust. But if one or two, you are fine.

Just my assumption but I believe the Mastery is meant to heal you 1d4 HP not grant it over your own. Could be wrong though, but that is what I understand it to mean.

Yes, the intention is to heal. It’s actually the same Starting Ability and Mastery as the Warrior Defender in Quickstart 2E.

As to the rest being OP… eh? Maybe. We’re playtesting and having fun

Greetings, shield wall. My how time flies. My group and I have played this campaign weekly every Tuesday this year so far. We knew it was an experiment going in, and I am pleased that this is seems to be working. You really can have fun saving lives instead of taking them.

I had intended to post here much more often as the campaign unfolded. Life held other things in store. Now I sit upon a half-finished expansion document and tons of scribbled encounter notes, and I am going to share. My new goal is to post a recap of some main encounters here once or twice a week, and to make a beta version of my doc available by the end of April. I’ve had a great time writing and testing this stuff, and it would tickle me pink of others found enjoyment in our work.

It’s a tough moment in the history of the Cosmos. The Warp Shells are mostly gone. Xevos, former controller of the Shells, is left with vast second-hand knowledge of what was and what might yet be. A Torton himself, his home consumed by the Devourer, it is easy to use vengeance as his platform. Thousands of systems have bent the knee, either by choice or by force, all joined by one promise: a better future without the Devourer. With this in mind, it’s easy for them to commit atrocities in the name of their “prophet.”

Dire times need dire measures. None know this better than Reph, survivor of the one and only successful assault on the Moons of Kerrak. The Imperium set the forested sky on fire that night. The ancient, secret Zurin protection that had kept Kerrak safe for millennia was neutralized. But the secret is not lost. There may yet be a peaceful solution to the Cosmos’ troubles - maybe even to the Devourer… but at what cost to the Zurin species?

Asklepion hears these echoes ripping through space and time. She hears the screams, and the prayers. Her brethren may have left in the Exodus, but she is unable to ignore this plight. Unlike Hellbound - killers, them - Asklepion sees a path without violence, and threads her crew to key moments where a healing touch, a kind word, are more than enough to stop battles in their tracks.

Will they be enough to save the universe?

Here’s a page from my work designing non-violent encounters: 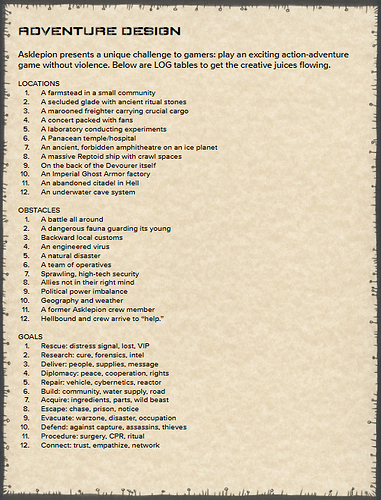 Hey @Andreas, can you share some insights from the non-combat nature of your campaign?

“This game challenges the players to look for peaceful solutions to sticky situations. There are a multitude of tools to try: stealth, diplomacy, bargaining, escape, confinement, deceit, barricades, disabling of tech, theft, swiftness, and, yes, even surrender. The LOOT and Abilities in this game emphasize these strategies.”

I did make combat-related roles HARD unless they have a combat-related background, which some of them do. I did start the game with a conservative approach to weaponry: they didn’t have any guns; they did have some disruption items that toe the line:

After that, my players and I had a good out-of-character discussion about where the line is on violence, what is fun and not fun, does this style of play work, etc. They insisted they needed some way to use nonlethal force to stop a threat. I agreed we could try that, with the caveat that using force can have unintended consequences, such as when rolling a 1. We all agreed that was a fun compromise: if you’re going to use force, be prepared to clean up the mess. Since then they have used a few nonlethal grenades, but have managed to not hurt anyone.