Alright everybody - here is a google doc to get things started:

BACKGROUND: It is the Fourth Age of Grey, a time of lawless turmoil following the return of the Snake Men. These dark times conjure heroes to push back the darkness, but few survive and those that do are souls marked by lurking shadows of both past...

I built upon what was already done by @GMagnus (with his permission of course) – > search by Ashen Company to find the OG link. Anyone can add comments to the doc to flesh this bad boy out; I am retaining edit perms on my end so we don’t get a mess on our hands right out the gates. If anyone sees anything that shouldn’t be shared or overlaps with an existing rule, let me know ASAP when discovered so I can remove it. I was pretty clean on that front but you never know… There is also a pending addition regarding a curse or character flaw that landed you in the Ashen Company. I am waiting on Magnus to clarify or add some suggestions to flesh that part out.

Using this as a ‘core’ template for character design, make an Adventure using ICRPG core 2e, Worlds, or the Magic book in the Kingdom of Grey for a party of Rangers and possibly their recruited Mage. The plan would be to then take said adventures and run roll20 sessions or sessions at your own table. Then share the adventure and the outcome with the rest of us.

If you want to skip the table ‘test’ and just want to share it for others to use, you can do that too. A 1-page adventure contest was suggested BUT we don’t do 1-page. We are a 5-page group because 3 scenes plus a few roll charts and any new monsters is roughly = 2 hours of game play

and makes for a great session!

You can either start your own thread or pop your adventure into this thread. My own adventure will revolve around the ‘go get back the McGruffin’ and should be done before the end of the weekend. I’ve never actually ran a session on roll20 (just played on it) and might try my hand at it with mine for a first run.

AND feel free to create and share your ranger! Sometimes a creative character write-up can inspire someone else to give you an adventure based around your back story!!!

@BigGrump I am glad you are doing this! Maybe this should be on your Stirling the Ash post …

Here are a couple of things I have put together: I made my a World War II setting. I ran a weekly campaign basically a battle board each session. A bunch of brand new players, they picked up ICRPG super quick. It was a blast. I ran it pretty straight forward. I didn’t use the Ghost Mountain gun rules, but it would be a good option. I had a blast crafting for WW2 and you can get Army men anywhere. Search for it on the forum and you can see the pictures I took.

[ww2%20icrpg01] Here is my down and dirty ICRPG - WW2 hack. I have only play tested it a couple of times but I think it is good enough to share. I hope it inspires you to play or create your own. https://drive.google.com/drive/folders/1jukMEetiO_ExjhhBknAWtKMmprabxUKg?usp=sharing As a reference to my post yesterday: First Play Test of my ICRPG WW2 hack

I ran wild with the zombie idea. I gleaned a lot of ideas from folks on the ICRPG forum. Then I borrowed heavily from the WWW for Zombie art to match what I had written. Given enough time, I am sure I could create the art myself I just found such great stuff and wanted to get it made.

[Zombies%20icrpg] I put this together a while back when someone started a conversation about it. I kind of went nuts on it. I found all of the zombie dudes online and borrowed them. I wrote up and built some print and play stuff. Check it out. if you like. Borrow it anything you like. There is so much good stuff when you search this forum for ideas. https://drive.google.com/drive/folders/16qbB5EU-8S_2H5bA4Q4ujkkx7qY-Q10r?usp=sharing What I truly love about Index Card RPG is its adaptabili…

I’ve totally seen these - super cool. I really like your “GM” sheet / rules too — pretty sure that was you.

For this one it is my goal to use the existing Alfheim setting and game mechanics with a few minor character tweaks to match the setting from the original write-up for the rangers.

I thought it was way cool when it was first introduced but life was busy. It should all point back to the existing books “as is” to help build future exposure and to explore all the nuggets that the setting has written about them in core and worlds.

Thanks for sharing your work! I can’t open your links on my mobile. I wonder if others have the same issue. I’ll try again on desktop.

I checked from a different browser that I am not logged into and it seems to work. If you can’t get to my files PM me and I will get it to you.

Totally makes sense. I guess I will just post my Indiana Jones hack to the regular forum. 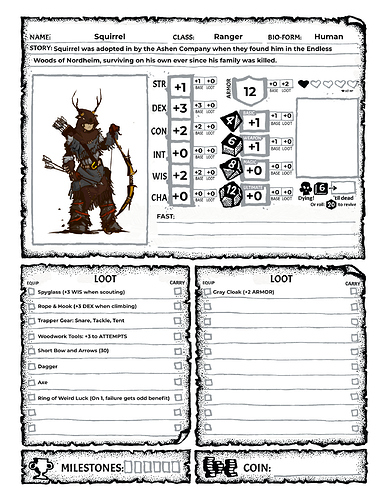 I love the idea of the Ashen Company. I think it sounds fantastic and a just a little gritty. I’m going to start working on some adventure write-ups, but thought I’d share my Ashen Company Ranger.

This is Squirrel. He’s just a kid from Nordheim, but ever since the Snake Men reappeared and the world fell into turmoil, he’s been living on his own in the Endless Woods.

He didn’t so much join the Company, but rather was adopted in. A band of rangers were traveling through the forest and a strange “creature” was helping itself to some of their supplies. Once the rangers caught on, it wasn’t long before they discovered and captured a wild boy. They recognized his inherent woodcraft and stealth and decided to befriend him.

From then on, Squirrel (the name those rangers gave to him) has been with the Ashen Company. He has learned additional skills, become proficient with a bow, and regularly takes on scouting missions for the Company.

Token is a recolorized version of Red Elk from the Heroes of the Hammer supplement (which is AWESOME!)

Nothing has captured my attention more, and I have never regretted being unavailable for a game more, than @GMagnus’s Ashen Company concept. I think it’s a super cool concept.

@BigGrump Is that your primer? Because I have to say, it’s super awesome. In particular, the fact that the company has to recover the magic items of fallen members is really a fantastic concept.

@Alex yes - one of the reasons I chose it is because I know you said you loved it but couldn’t play at the time. I added the recovery part to the gear due to people grumbling about ‘loot’ progression; I thought as a story element it was golden!

Just skimming thru worlds and core on the kingdom of grey had me drooling when combined with the idea of the Ashen Company. That’s what this is about; the rest of us using what we have learned from him and getting some work done.

I am getting thread confused - had to remove a portion of this and will put it in the other thread to keep them relevant.

@KaneDriscol don’t forget your ‘tag’ - love it! Either make one or create one.

SKILLED WITH ‘X’: when using ‘x’ roll ULTIMATE; where ‘x’ is a specific tool or weapon type.

I could say EASY for the skilled at concept but I don’t always like that. A GM should always be able to adjust EASY and HARD in-game so I try not to give it as a player controlled situation.

I actually did include the FAST TAG haha. It’s just really really small under the stat boxes. I thought it would be a good place for it, but maybe I need to make it more prominent.

; I thought as a story element it was golden!

It is golden, and it totally feeds a “fetch the mcguffin” quest. I mean, who doesn’t want to recover a Company relic from a fallen comrade?

I once started a book where the heroes were made heroes by a magical item they were given and upon death, the sacred item was passed onto a new hero. The story was about a young naive villager who was selected and the item transforms him into a champion. But then he did his first mission and discovered his fantasies were way different than the realities of what the job actually entailed. I only did a rough plot and a few paragraphs.

I felt though that the idea totally has legs in ICRPG!

@KaneDriscol using my phone; I see it! 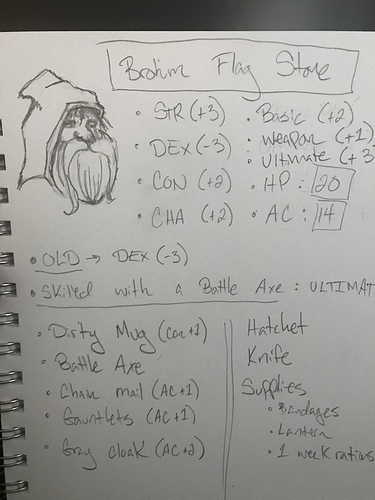 Brohm is an old dwarf with bad eyesight and a bum knee but no one is more deadly with an axe or as stubbornly persistent. He has a story for every situation and fills the nightly camp fires with his tall tales.

In another life he would have been found in a tavern earning his drink with a story and song but in these times, his job is to record the deeds of his brethren as the keeper of the Ashen Company’s living journal. When not out on the trail, his face is buried in a book recording history with his own personal embellishments.

This is Jardok Kegrock. I played him in the very first Ashen Ranger adventures that @GMagnus ran several months ago. I really enjoyed playing this character and hope to get another chance.

Not to throw anything off-track but something I thought would be kind of a cool twist… The Ashen Rangers and the magic item plus the Loot progression that Hank’s working on along with this got me thinking. What if the Ranger is actually the magic item, sentient. That’s why they must be returned, to be wielded by another. The magic weapon retains the memories (and a tag) of the wielder when they are killed. If the wielder dies, the weapon goes to another but it’s the weapon that is progressing.

Anyway, just something that popped into my mind.

That is absolutely nuts. I love it. Imagine the character sheet. In the portrait box is the relic, and in the Loot section is a list of people who have been crossed out, along with the current host’s loot. Utterly fantastic!

Jardok looks like Chuck Norris. I bet he has a third fist under his beard.