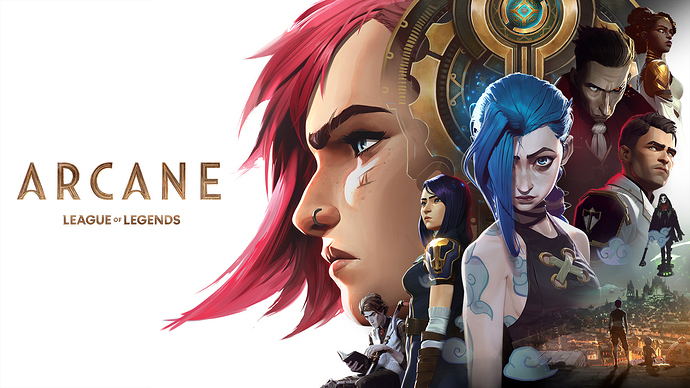 A world primer for use with the ICRPG Master Edition rules. See the League of Legends Wiki for more info.

Based on the world behind League of Legends , Arcane dives into the delicate balance between the rich, utopian city of Piltover and the seedy, oppressed underground of Zaun. Known across Runeterra as the "city of progress," many of the most brilliant minds call these cities home. But the creation of hextech, a way for any person to control magical energy, threatens that balance.

Below is the summary of the Special Rules for this world primer. There is much more content located in my Notion Notebook. Drop me a DM if you wanna play in my worlds.

Example - Brom the Bouncer has 3 STR. He can roll up to 3d20 to use for his STR checks. He is facing a dreaded Blue Troll. The ROOM TARGET is 15. Brom moves to close in on the Troll. Brom attacks twice, spending 1 die on his first attack roll, and 2 dice on his second attack roll. He rolls a 12 on his first action. A MISS! And he rolls 15 and 18 on his second action! A HIT with a +1 effort bonus.

Each point in a STAT adds 1d20 to your Action Pool. Spend them to do multiple actions or one really successful action. The decision is up to the Player on how to use them.

If you have Zero Points in a stat you may only do 1 action, and any roll using that STAT is HARD roll on 1d20.

You must declare all of your ACTIONS, before rolling any dice.

Each additional success adds 1 point to you EFFORT roll.

Authors Note: The idea behind this was to grant characters with STAT bonuses more actions and effort. Fighters fight and need STR, therefore fighters will get more actions per round when swinging a sword. Wizards will get more spell casting by using INT as their action pool. But switch the roles and the fighter gets one action to use magic (never a good idea to begin with) and the wizard gets one action to swing the sword (again, bad idea).

TOOLS, WEAPONS AND OTHER EQUIPMENT

Tools, Weapons, and Special Abilities can add to your dice pools and make more EFFORT in a shorter amount of time.

Here is an example for a weapon in a fantasy world: FLAMING LONGSWORD : MAGIC EFFORT, +1 STR, and +1 MAGIC. Add 1d20 die to STR CHECKS and 1 point to MAGIC EFFORT when using this sword.

Magical Weapons do MAGIC effort, unless another rules says different.

Our example Hero, the KNIGHT (STR 1, WEAPON 1, HIT POINTS 10) would roll 1d20 for his STR bonus, and +1d20 for the Flaming Longswords STR bonus. 2d20 in total. If he hits with any of the rolls, he will roll 1d10+1 total effort (1 for the MAGIC Effort of a magical sword, no bonus from the KNIGHTS MAGIC effort). Plus any additional EFFORT bonus for additional successes.

It is easy to get confused on what EFFORT or ABILITY to use when dealing with equipment. A rule of thumb is to use the higher of the two EFFORTS. A magical longsword could use WEAPON or MAGIC. In most cases use MAGIC, unless the description says otherwise. Sometimes enemies are immune to one type of effort and you must use the other type of effort by default.

A Laser Pistol is another example. High energy lasers would use MAGIC EFFORT.

A normal Pistol would use GUN EFFORT.

While a broken or dirty Pistol may only use WEAPON EFFORT, for example.

When in doubt, ask the Game Master.

DICE POOL CAPS: 5d20 are the max you can roll in a given turn.

AUTOMATIC SUCCESSES : Any dice in your pool that exceed the dice cap limit are automatic successes. These count as EXTRA EFFORT (adding 1 EFFORT die for each die over the dice cap)

BUY SUCCESSES : Players can “Buy” automatic success by removing 3 dice from their pool before they roll, to receive 1 automatic success. Players cannot buy successes after they roll. They buy, or roll, they cannot do both in the same turn. Use of this rule may also force the Game Master to increase the difficulty of ABILITY CHECKS to require 1 or more SUCCESSES. GM Suggestion: +1 Success for every heart the monster has.

BOOST: a special status tag that can only be granted by loot, milestones, special abilities, or magic. An item, power, ability is required. 20’s rolled on any ATTEMPTS or CHECKS, count as 2 successes. Roll assigned EFFORT dice twice and add both EFFORT rolls together.

ADVANTAGE / DISADVANTAGE gives +1d/-1d to your POOL for environmental, and situational bonuses or penalties. Remember, if your dice pool is zero due to your stat having no bonuses from CREATION POINTS, you always roll 1d20 the HARD way.

BUYING HEXTEK : Spend MILESTONES to buy HEXTEK. You may only carry 1 HEXTEK item per point of your highest ABILITY in CON.

ARMOR REDUCTION: Each point of armor removes 1 die of damage; starting with the highest die rolled. Your armor is reduced by 1. Shields are included in this rule, but a shield is destroyed instead. GM Suggestion: Assume a monster has 1 ARMOR point per HEART, unless you feel the monster is tougher than normal then add more ARMOR.

Great work! I think I saw a prototype of this months ago, it’s really come along way. I am impressed with your ACTION DICE mechanic, that’s slick! I hadn’t considered the idea of using the stat value as a measure of action economy.

Thanks for this gem!

The Action Dice mechanic is really interesting, its giving me ideas!