This is amazing and I love it! I just started reading through but I can also see it has tons of great ideas.

I will let you know any more I might see.

Found another one: should be +1 to any STAT 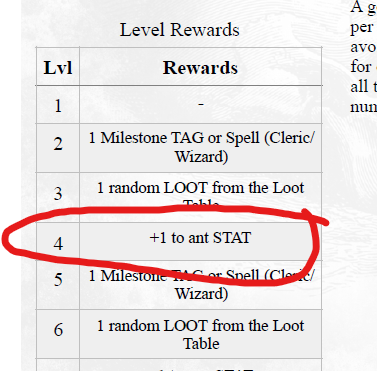 Thank you guys for making this better!

I wanna play this sooo bad. Maybe I’ll run a Roll20 session or something

Thanks for making this available! Very cool, extra kudos for all the monster stats!

When I was editing the monsters I was listening to Hank’s last podcast and he answered a mailbag question about an ICRPG monster manual. I tackled most of the old school ones for sure.

Been working on one to share too. I figured a few people are so I’ve been putting together a group of unconventional monsters.

The more I read it the more I like it. One of my favourite OSR style games is Beyond the Wall. It only uses three classes, Warrior, Rogue and Mage but builds characters with playbooks that are mostly Multiclass Characters, like Warrior /Rogue etc and takes features of each one. Have you any advise how I could achieve multiclassing with this ?

Man, this is amazing! This is just what I’ve been looking for, an old school/new school hybrid framework I can really build on. Well done!

I’m also a fan of Beyond the Wall.

Multi-classing would be difficult in this because of the Effort die system. You could possibly have a main class and then instead of taking that classes TAGS at character creation take them from the secondary class. You’d have to rework the XP table also for what is essentially a new custom class (maybe full xp from the main class+ half of xp for the secondary).

But the easiest way to make a custom character is at 2nd Level just give the character a milestone TAG that has something from the other class.

My only concern with it would be giving any other class one of the Spellcaster TAGS. That’s going to be a recipe for having one character in the party being OP.

I just use supplies for long distance travel (and feeding mounts) and the backpack rations for shorter treks and underground.

My assumption was a bag of supplies is kinda big so no one would pack them into a dungeon.

Makes sense. Considering that a supply pack takes up one equipment slot it will require the party to get pack horses and so on if you want to play out a more detailed overland trek.

That’s exactly how we use them, also they tend to hire retainers to guard their pack animals when they make treks into dungeons.

Have you considered an alternative to random loot as a level up? For instance class specific milestone tags? My group is not so keen on getting loot as a reward so I have been looking into other options

Class specific Milestones would be awesome. My group is the same way, I gave them random loot today at level 3 and I got an audible ‘ugh’.