ALLIES as Loot in ICRPG (no, hear me out)

Hey guys. I’ve been a fan of ICRPG for some time. Love what you all have been doing with this game. This is the first time I’m contributing with something.

So, here’s the idea. I’d love to hear your opinions.

Allies can be a very special form of Loot for ICRPG . These rules are based upon the rules written for Império de Jade , a Brazilian RPG of oriental fantasy action, by Marcelo Cassaro, Alvaro Freitas, and Guilherme Dei Svaldi.

Allies are a special kind of NPC (non-player character) that is also a form of Loot (and doesn’t count against the total gear a character can carry or equip). Allies are strong-willed characters who fight alongside the hero. However, an ally doesn’t have a fully-fledged character sheet or its own actions – instead, an ally works as Loot , improving the player character’s stats in some way.

In a game the focus of the story should always be the heroes – they’re the stars, the protagonists. So, an ally is an important character that fights alongside your hero, but it is still support cast. Allies should have goals and personalities, but should never overshadow the heroes.

Some campaigns and stories can be about recruiting allies – in some settings, allies can be the only (or the best) form of Loot , and the heroes might need them to defeat the villains. In other stories allies might be temporary Loot – for example, the group is hired to defeat the bandits that prey upon the travelers on the Bone Road and the local magistrate knight joins forces with them for this purpose.

Allies aren’t always human (or whatever). Animal companions, drones, some kinds of vehicles… All of these and more can be considered allies and use these rules.

The GM should roleplay the heroes’ allies, but remember to not give them too much “screen time” (they’re support cast after all). Also remember that, as with any other Loot , allies can be taken from a character – captured, killed, destroyed, or an ally might consider the hero is no longer worthy of their help.

How to use Allies

In game terms, Allies are Loot . Use the tables and ideas below to help you build an ally for your heroes. The biggest difference between regular Loot and Allies is that you can improve an Ally by giving it some of your own Loot ! Once an Ally is provided with enough Loot (at GM’s discretion), simply increase its rank to the next step.

Allies come in three ranks: starter , journeyman , and master . The higher the rank, the more experienced, advanced, or powerful the ally is. You can improve an Ally by granting it some Loot , as you would do to any other hero (one to three pieces of relevant loot per rank).

Allies
Assassin. A ninja, rogue, or other stealthy type that kills people. Starter: When you ambush your enemies, deal +1d6 damage; Journeyman: Additionally, when you outnumber your opponents, attack checks gain a +2 bonus for you and you allies flank and outmaneuver your enemies; Master: Before the start of any combat you can make a simple Check against the current Target (depending on the situation, usually Dex or Int). If successful, you ambush the opponents.
Counselor. A companion who supports you with advice and strong words. Starter: +1 on non-combat Checks and Attempts ; Journeyman: Improves to +2; Master: Improves to +3.
Destroyer. A mage, heavy artillery drone, or other who supports you with lasers, grenades, etc. Starter: Once per turn, you can cause 1d6 energy damage on a target of your choice up to FAR distance; Journeyman: Improves to 1d8; Master: Improves to 1d12 or you can cause 1d6 to all targets within NEAR.
Fighter. A warrior-type ally, a knight, trooper, attack animal, combat drone, etc. Starter: +1 on Checks for melee or ranged attacks; Journeyman: Improves to +2; Master: Improves to +3.
Guardian. A guard animal, militiaman, knight, or other whose function is to protect. Starter: Reduces all damage taken by 1; Journeyman: Reduces all damage taken by 2; Master: Reduces all damage taken by 3.
Healer. A cleric, herbalist, medic droid, or other companion with healing powers. Starter: You regenerate 1 hit point per turn; Journeyman: You regenerate 2 hit points per turn; Master: You regenerate 3 hit points and also ignore one negative condition of your choice per turn.
Mount. A riding animal, vehicle, or another magical/technological marvel that can transport you. Starter: You can Move FAR and still take an action, since it’s your mount who moves you; Journeyman: Your mount also has one special movement type (fly, float, run over water, etc.); Master: Your mount has several special modes of movement and can even provide you with life support in space or other dimensions.
Shooter. An archer, gunner, blaster droid or drone, or other who provides ranged support. Starter: When you make a ranged attack, deal +1d4 damage; Journeyman: Improves to +1d6; Master: Improves to +1d8.
Stalker. An animal with amazing scent, a bounty hunter, or another specialist in tracking targets. Starter: +2 on Checks and Attempts to track a target; Journeyman: Tracking Checks and Attempts are now easy; Master: You can always locate your quarry, even if it is invisible or otherwise hidden. Only one quarry at a time.
Tough. A bodyguard, tank drone, etc., who provides melee support. The type that attacks first and asks questions later. Starter: When you make a melee attack, deal +1d4 damage; Journeyman: Improves to +1d6; Master: Improves to +1d8.

Allies don’t count as Loot , so you don’t have to “carry” or “equip” them. However, no character should be able to have more allies at the same time than 1 + its unmodified Charisma (minimum 1). 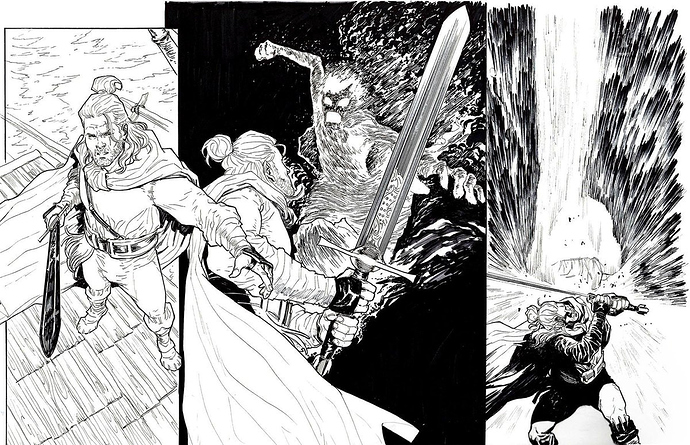 This reminds me of @GmGrizzly’s NPCs as LOOT system that he’s been developing. (Which I’m still excited to see expanded in FORCES

Ohhhhh great! Where can I see it?

He used to have it up on his website but the site appears to have been taken down (https://www.thegrizzlyrant.gmgrizzly.com/2018/06/forces-npcs-as-loot-in-icrpg.html?m=1).

Do you have a recommendation on where to find your system, @GmGrizzly?

I really like this and other ideas to integrate hirelings and npcs within the LOOT or CHUNKS system.

I’ve experimented granting “tokens of loyalty” to players who had NPC allies follow them. They did counted as a LOOT piece to represent the fact that they travelled togheter and might carry each other’s stuff from time to time. I’m currently using upgradable class LOOT and was thinking that maybe NPCs could work the same way, granting abilities and powers instead of just adding one more person to the fight, kind of like an animal companion would. Add some TAGs to the companion’s LOOT piece and you start to get something super interesting.

I had a comment on a post somewhere around here that had the current iteration, but can’t find it. I’ll sum it up here.

Companion NPCs count as 1 heart loot. Any PC can have the friendship in carried gear. Position, the NPC always default to being within NEAR distance to the PC who has the loot friendship with the highest CHA. What’s more important to your character, possessions or friendships?

Mechanically, a NEAR companion makes attempts EASY, as well as provide 1-2 minor loot bonuses. A FRIEND may perform a CHA attempt to perform 1 free action, no bonuses to Effort. Each NPC may only perform 1 action per round, and all NPC actions are tracked with a single Spellburn counter.

Special or legendary NPCs may also have an ABILITY such as a single spell, power, or other feat-like ability such as absorb damage.

For flavor, I’d use tags. 1 for appearance, 1 for quirk, origin and destiny. Use the destiny tag for inspiration for side quests.

That’s all I have for now without giving away tables and whatnot.

I was pleasantly surprised when a player in my game rolled on a ICRPG loot table and it was a goblin who entered his servitude.

We re-skinned it as a elf (to fit his story). No stat bonuses as of now so it is only rolling a d20 for everything.

I’m all about allowing these things to happen but in moderation to keep them special (unless the game dictates otherwise). Typically I wouldn’t want one PC to have more than one at a time.

I also subscribe to letting the player move their PC & ally/familiar both each turn, but only giving their action to one or the other. It keeps the game flowing and doesn’t give the player too much action compared to the other players.

That same situation happened to me! A player rolled for loot and got a goblin, but decided they wanted a raven instead.

My philosophy for using NPCs as loot has been that I have a hard enough time running the monsters and NPCs opposing the players that I don’t want to add on top the difficulty of dictating what a friendly NPC does too.

I really like your idea for letting PCs choose one of the other. Definitely going to swipe that haha!

Liking all these ideas, but I feel bad for the poor Allies, trapped in a chest, waiting for heroes to put in ten points of EFFORT to get 'em out!

A good GM drills air holes in a chest…

Nice! What’s the old side scroller video game where you’d crack open doors to have random allies bust out and help you? Anyone?

Answering my own question . . . Capcom’s “MAGIC SWORD”. I played the heck outta that back in the day. You busted open locked cells/doors and random allies popped out to run with you.

This is a fantastic and creative idea! Thanks for sharing it. It’s something to consider including in my games.

“You open the chest and find…uh oh…a skeleton. It was always a skeleton and whoever says otherwise is taking its place in the box”.

Inspired by this thread I made this item, copied a lot from Ultimate Equipment/Pathfinder. I make special laminated cards for special (Wondrous) treasure. 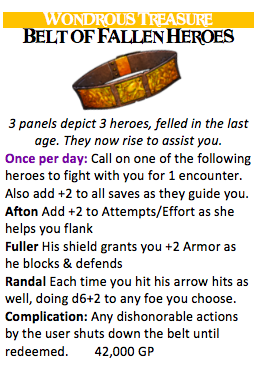 This game looks like what I wanted with the rules so much you’d think I played it… I didn’t know it existed haahah
Thanks for sharing!