Hey everyone! In an attempt to get better at digital art I have started a personal challenge.

I will draw 100 room maps. No deadline, just whenever I have spare time I am going to try and draw a room.

This stems from the 100 something challenge where people pick something, a subject, a tagline, etc. to try and help practice a skill (more specifically art) by helping define some parameters to avoid blank page syndrome.

Anyways I could easily be explaining this incorrectly, here are a few I’ve done so far. I intend to update this when I have something new to share. 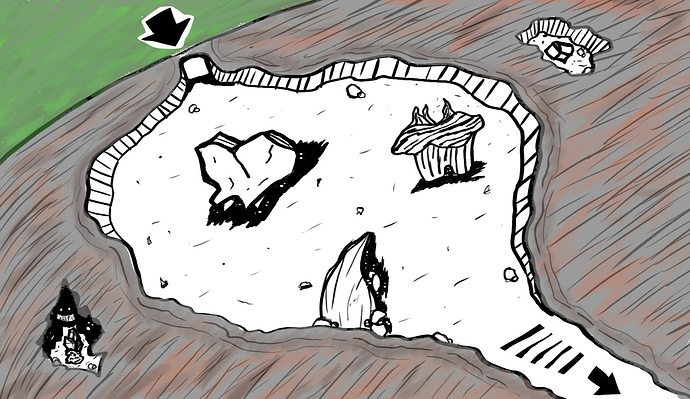 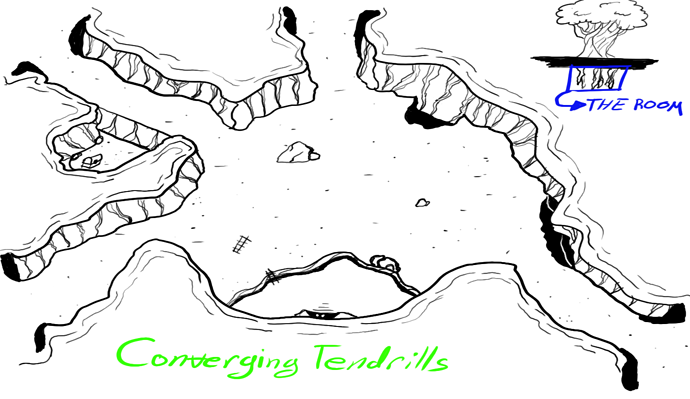 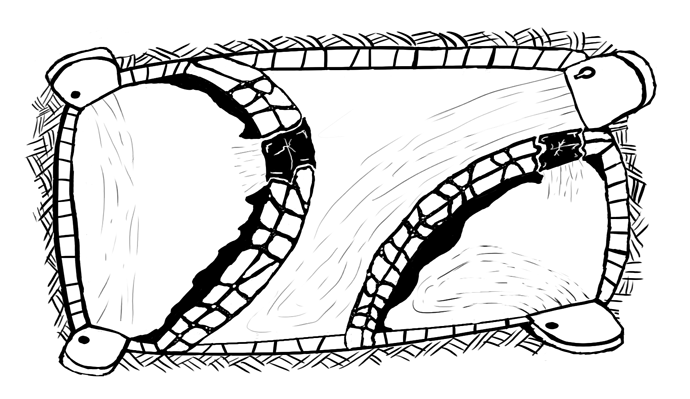 Love your idea and plan! I have been thinking about practicing my artwork too and this is a great idea for improvement. Keep it up!

Keep up the good work! If you need suggestions, poke me?

I’m really happy how this one turned out. I was trying to play with different border hashing/filler. 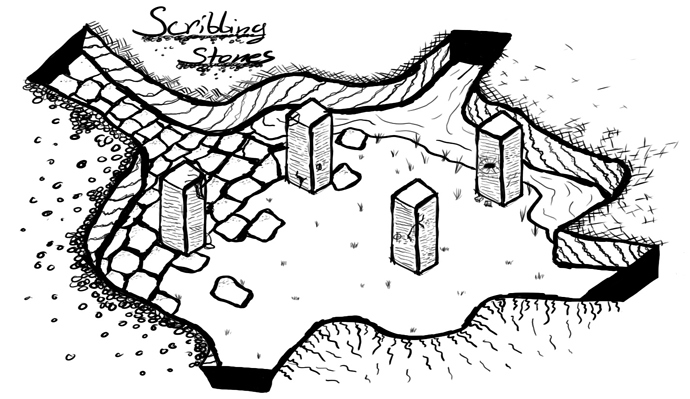 ‘Royal Meeting’ This one I experimented with PS’s straight-line tool. Admittedly the chairs don’t quite match everything else. But it was still fun to make a room that was intended to allow 0 combat. 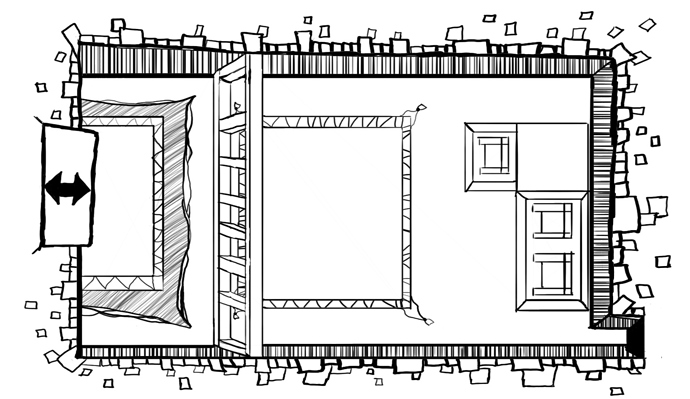 ‘Secret Passages’ I was feeling rather dismayed from trying more rigid rooms, and not being super happy with them. So I went back to a more natural feel, and back to including hidden elements. 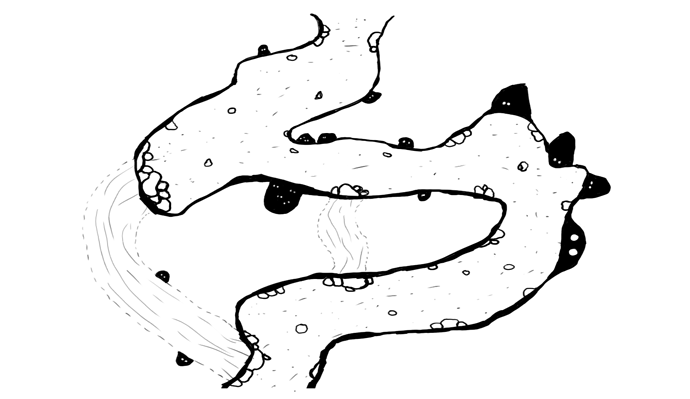 Thanks for the kind words of motivation Shield Wall!

Those look great! Keep up the good work, those of us that can not draw appreciate it

I really like the way ledge in the middle turned out. I feel like I added the right amount of detail. 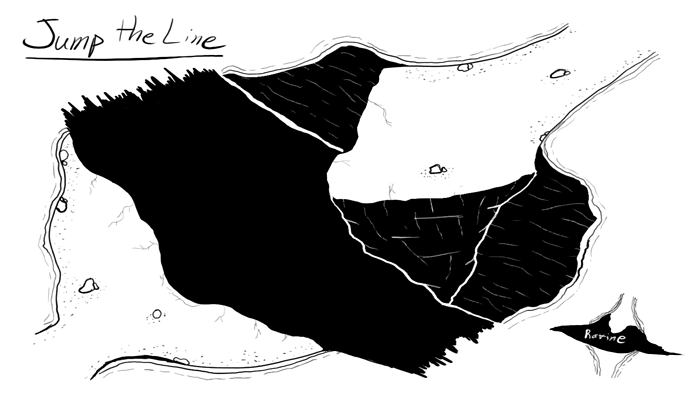 “Secret Hovels”
Idea is that there are secret rooms, some that have been discovered.
Played around with actual isometric maps. It was fun! 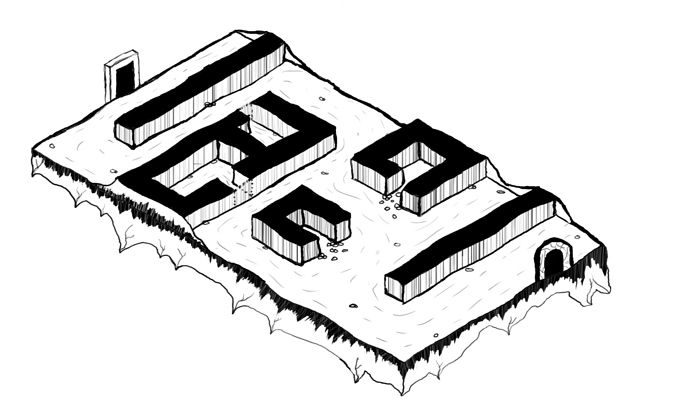 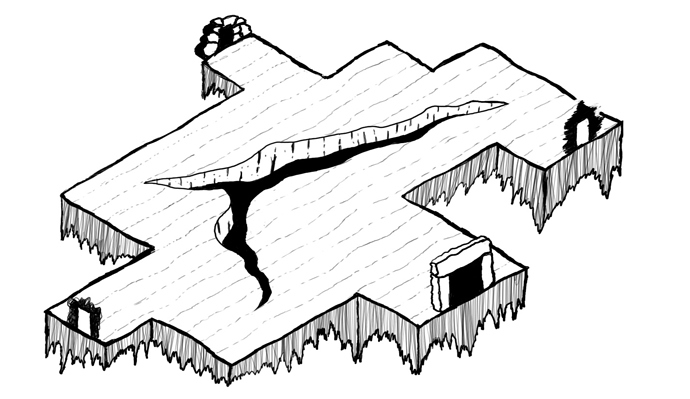 @BlazingPolyhedron gemme some features! Please. Ie chasm, center stones, mazes? New styles could be fun to if you can think of any.

Not feeling quite as motivated this week as the last two I only got around to making one room map.

A sunken/unearthed dig site room with a magical door! 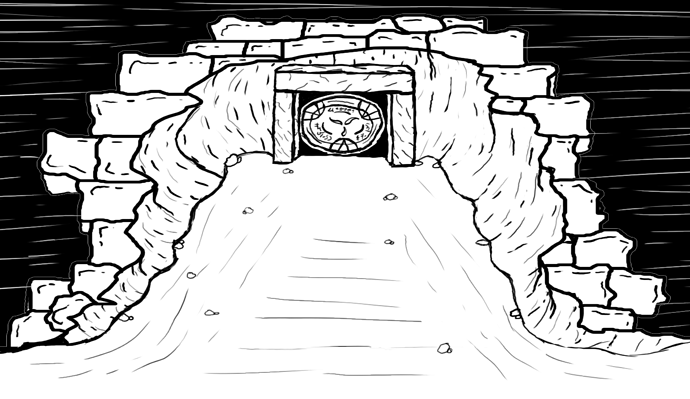 And because I really enjoy the ominous cave entrance theme I made a slight variation, though I wouldn’t really count as it a whole separate map. Just a bonus one! 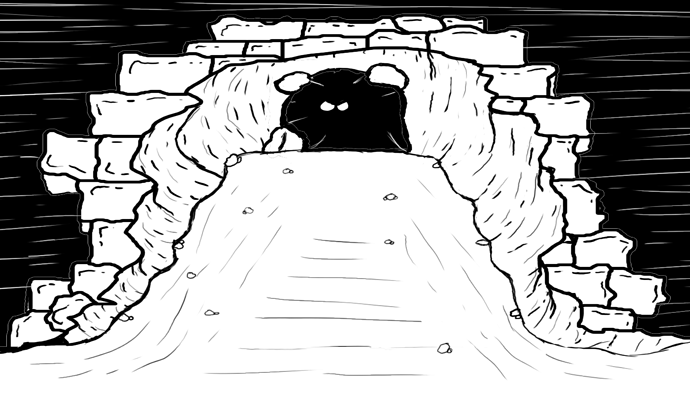 Awesome idea, and I like seeing all the progress pics! Keep 'em coming; you’ve got accountability partners now.

Two more this past week-ish.

I’ve gotten addicted to Empyrion - Galactic Survival lately and seeing Hank’s full color update of the Dead Zone assets I might try my hand on some sci-fi maps.

Light Show
I struggled a lot with this one, it kept looking plain and lack luster so I just kept adding more. Still not sold on the way I filled in the pillers at the edge of the orbs. Not sure it clearly states “I’m line of sight blocking”.

Any suggestions on other textures for a pillar? Just all black? 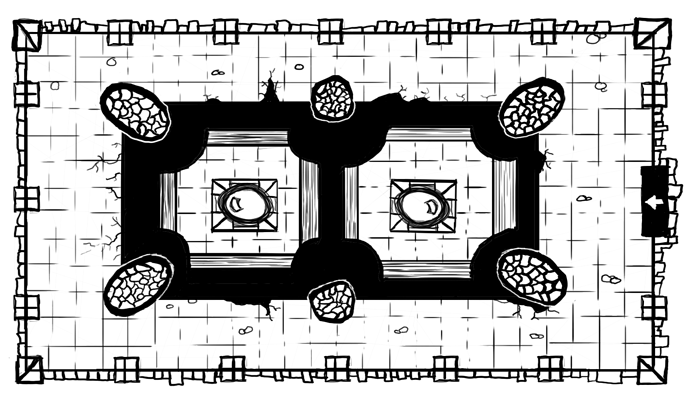 Not sure I’m happy with the water. I would love some suggestions or examples of inked water.
I didn’t feel like all the ground decoration added anything so I turned off that layer. Do you think it needs more or good as is? 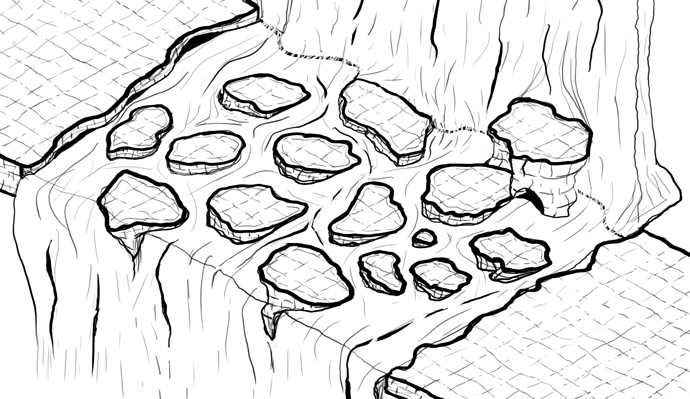 Duuuuude! These are all badass! Thank you for taking us all on this journey, man. You’ve got me hooked for sure. Fantastic work!

Really love the Deteriorating Falls! Maybe a map with various heights for the heroes to jump around? I’m feeling you could come up with a lot of map ideas to try verticality! Like, what if your players decided to go down that crevice?

In the same vein, what about a layered map? From the top of the tower to the secret basement? Maybe give that tower a weird shape to justify placing some rooms right or left and around the top? Or allow the GM to randomize the rooms, perhaps?

Aside from that, what about a multi-part map that is the same area but at different epochs? From golden walls and roads to covered in nature to flooded to frozen? With that one, you could test various opening zones like the main frame at the earliest era to dropping in from above when it has been absorbed downward into the ice? As well as various cover positions through time.

What about a map that is affected by the way that you tilt it? You could play around with giving the walls various grips or dangers, perhaps even making it just a bit of a labyrinth?

I know those aren’t rooms, exactly. So, now, I will move on to them: what about a map with a circle of standing stones in different variations: a Z, an X, an O. And depending on your mood, they could all be connected to the same hint of magic. As well as various conditions: some of them are buried in a lake, the other formation is at the top of the hill, allowing the GM to make a defensive encounter where the players have to activate the stones will defending?

I think a testing area for robots or weapons with an elevated platform for the scientists could be a really cool, tactical place to be. Plus, you’ve got weapon racks lining up the walls for your players to hack and test!

You could also try multiple configurations of roads, rail roads and highways to see how you could contain, trick, trap and propose rewards to your players (you know, so they don’t leave at the first sign of trouble? XD)

Obviously it’s been a while since I’ve drawn any maps. I got married, had a mini-moon at a lake house (was supposed to go to New Zealand - I’m from the US- but covid -.- ), and got spurred back into Age of Sigmar as I’ve been itching for some in person physical play.

I’m hopping to get back into the swing of the map designs this week though.

Thanks @BlazingPolyhedron for all the great ideas, I had been wanting to draw up an isometric stair map akin to a room design Hank made way back. Also with BMC wizard tower video I definetly got spurred on for some designs on how I would approach it! Looks like I have my next couple of maps! ;D

Oh! Congratulations for the wedding! Sorry you couldn’t go on a trip, but soon enough everything should be back to normal! I hope you both live happily ever after!

Small Update. I wanted to get going on a wizard tower map. I really enjoy Hank’s ‘side view’ maps and there break down so I thought I would do a similar thing with the wizard tower.

So here is the first part of 3. 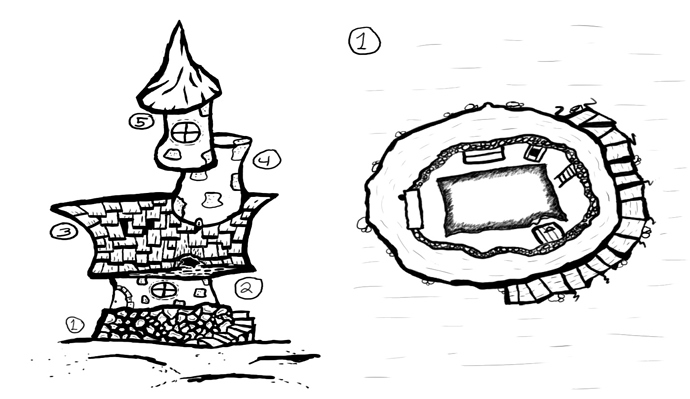 Oh, man, that is pretty cool! Is there a possibility to expand this series of map, please? I’m thinking the Wizard is playing with dimension stuff and so there are two versions of the map. Multiple fights await the players as they switch from one dimension to another at will to solve the room(s?)

Here is the next map. I realized in my first picture I actually combined rooms 1 & 2… So I adjusted the numbering, but haven’t reuploaded the image, I can if there’s call for it but really I just shifted the bubbles and removed the number 5.

since now 2 (prev 3) is the largest room I decided to make it it’s own image (using a standard tarot card template I have to help try and keep some consistency).

Here it is! At first, I wasn’t sure how I might incorporate the multi-realm option. But as I was drawing this room I realized I didn’t leave many options/space for moving between levels. I didn’t just want it to be ladders for each elevation transition. So I made a little teleporter rune spot. 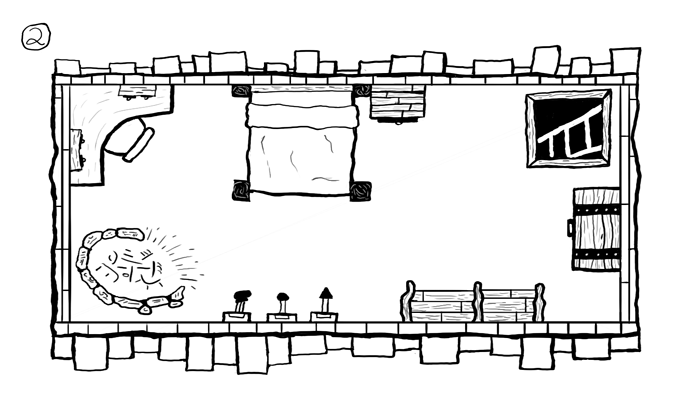 I felt the itch to do some Saturday cardtoons!

Definitely slowed down on the progress but I’m still having fun.

Admitidly it’s hard to tell in the process though. Often things look off. I’ve decided that just means I need to add more details. So I’ll try and remember that. Room 2, I feel like I should have added more ‘floor’ texture, and even more detail to the shingles that are on the outside of the room.

ANYWAYs enough of typing negative things. Here are the last* two rooms of the wizard tower!

My thoughts are that 2 & 3 are connect by the rune circle, while 3 & 4 are connected via the weird little stone portal. I think it would be fun that depending on what levers in room 2 are switched the portal takes you to room 3 in different realm/time. While depending on how you move the statues room 3 it does the same for room 4. Kinda like in howls moving castle the door leads to several different places. 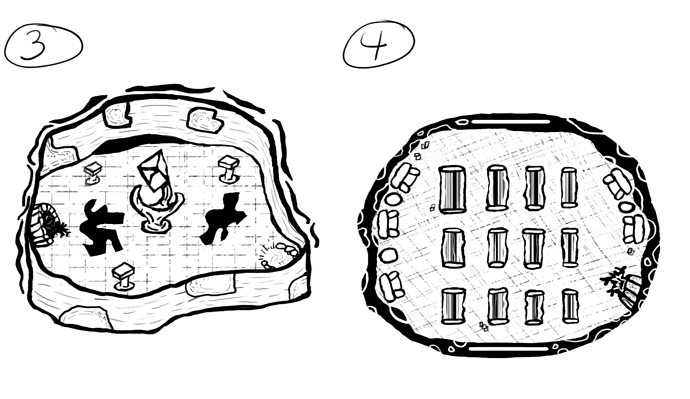 I think eventually I’ll add another room or two that can only be accessed by the book cases! I think that would be fun. Like grab a book on necromancy? Teleports you to a necromatic workspace underneath a graveyard! etc etc. Hope you have a nice weekend!

It’s been a bit over a month sense I had the itch to draw out a room, but it is back… at least a little!

Previously I left off with wanting to do some sort of vertical map using stairs, so here it is: 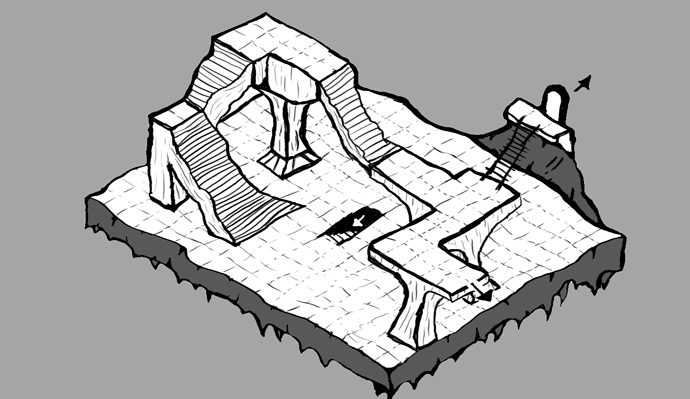 I got pretty excited by one of Hank’s room design maps to try some greyscale layering for foreground/background.

I’m not super skilled with photoshop in general and whenever I try to use different layers and the magic wand tool I always get misc color pixels just around the area I want to fill in. I’ve tried to set up my brush so it is hard pixels so there shouldn’t be any color variations but still, I get these awkward color transitions.

Does anyone understand what I am saying? How do you fix/get around this? Any video tutorials or keywords of what this kind of ‘problem’ is would be appreciated!